Deutsche Bank returned to profit for the first time since early 2019 as a surge in bond trading, falling costs and lower provisions for bad loans buoyed Germany’s largest lender.

The bank’s fixed-income trading revenues climbed 47 per cent in the third quarter, it said on Wednesday, surpassing the average 26 per cent rise recorded by its five largest Wall Street rivals.

“While we benefited from some market tailwinds, the key driver of our outperformance has been the changes we have made to our business over the past year,” Ram Nayak, Deutsche’s head of fixed income and currency sales and trading, said in an interview.

The bank’s shares were slightly up on Wednesday morning.

James von Moltke, chief financial officer, said on a call with journalists that the lender was “on a very clear path to a full-year pre-tax profit” this year. However, he warned that a potential second lockdown in Germany and other European countries to fight the Covid-19 pandemic would “of course [have] an economic impact, and we brace ourselves for it”.

Deutsche has been suffering for years from falling investment banking revenue and bloated costs. It was slow to adjust to the tighter regulation and stiffer competition after the financial crisis a decade ago, and was dogged by compliance scandals and boardroom battles. In July last year it embarked on a radical restructuring under chief executive Christian Sewing.

Andrew Coombs, an analyst at Citigroup, warned that the strong performance of Deutsche’s investment bank was likely to be a temporary phenomenon. “We believe the [investment banking ] industry backdrop is unlikely to be as supportive for Deutsche Bank in 2021,” he wrote in a note to clients, adding that the lender may also currently be underestimating the headwinds from loan losses.

Anke Reingen, an analyst at RBC Capital Markets, said the bank reported “a strong set of results” and praised its “continued good cost control” as well as “progress on the capital ratio”. 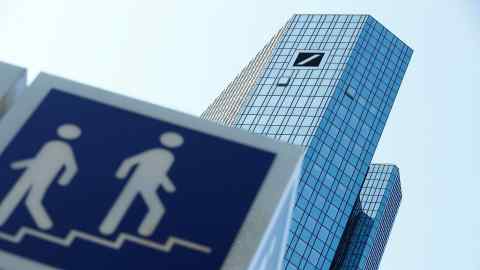 Total revenue at Deutsche’s investment bank increased 43 per cent in the quarter from a year earlier, to €2.4bn, which is set to boost the bank’s bonus pool beyond earlier expectations.

Performance has been “ahead of our plans this year so as a consequence we have accrued for variable compensation that is beyond what we originally planned”, Mr von Moltke said in a Bloomberg Television interview on Wednesday.

The improved performance from Deutsche’s investment bank came as the lender reported an overall profit of €182m for the third quarter, compared with a loss of €942m in the same period a year ago. Analysts had expected a loss of €26m.

In the third quarter, Deutsche earmarked €273m for credit losses compared with €761m in the second quarter. However, the figure was 20 per cent lower than analysts expected, as coronavirus-related headwinds abated quicker than anticipated over the summer, reflecting similar trends at other European lenders such as HSBC and Santander.

As part of the restructuring, Deutsche has pledged to slash 18,000 jobs by 2022. Job cuts have stalled since April, and the total number of staff increased slightly in the past two quarters, to 86,948 — above its target headcount of 74,000. 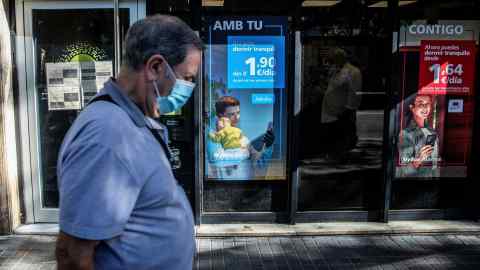 Mr von Moltke said that while the pandemic had made it temporarily more difficult to reduce staff, the lender would “reacquire the glide path over time” of shedding about 1,000 jobs per quarter.

Elsewhere in Deutsche’s other key divisions, its corporate bank suffered a 5 per cent year-on-year drop in revenue and an 11 per cent slide in pre-tax profit, while revenue was flat at the private bank and it recorded a pre-tax loss.

Overall, Deutsche’s non-interest expense fell 10 per cent year on year and Mr von Moltke confirmed that the bank is on track to meet its full-year cost-cutting target.

Deutsche’s common tier one equity ratio, a key indicator of balance sheet strength, remained at 13.3 per cent of risk-weighted assets, ahead of analysts’ expectations and of its minimum target of 12.5 per cent this year.

The bank’s return on tangible shareholder equity rose to just 1.5 per cent in the quarter, far below its 2022 target of 8 per cent and well below its cost of capital.