A US demand for $14bn has rattled Germany’s biggest bank, raising the spectre of a Berlin bailout

Having worked at UBS during the Swiss bank’s flirtation with collapse in the financial crisis, John Cryan knows a thing or two about the skittishness of global markets. But even for someone as battle-hardened as the 55-year-old Briton, the last fortnight at Deutsche Bank has been a rollercoaster ride.

On September 16, shares in Germany’s biggest bank, where Mr Cryan is now chief executive, slumped 8.5 per cent after it emerged that US authorities had demanded $14bn — three times what had been expected and only slightly less than Deutsche’s wizened market value — to settle allegations that the bank mis-sold mortgage-backed securities before the financial crisis.

A week later, they tumbled 7 per cent after it was reported that, despite fears that such a huge penalty could hurt Deutsche’s financial strength, the German government had ruled out rescuing the lender. In early trading yesterday, they plunged another 8 per cent after a handful of hedge funds began withdrawing some of their derivatives business from the bank. The turbulent fortnight saw the bank’s share price, already pummelled by months of precipitous fall, hit a 33-year low of €9.90 early yesterday before recovering to €11.57 at the close amid rumours that a deal with US authorities was imminent.

Despite vehement denials from both the bank and the German government, there has been rampant speculation in recent weeks that Deutsche — long the biggest player in Europe’s strongest economy and a vital cog in global capital markets — could need a government rescue.

For a bank that spent much of the past 30 years trying to break the US grip on global investment banking, it is a remarkable turn of events. And given how big, and interconnected, Deutsche has become in its pursuit of its Wall Street rivals, its woes have sent jitters through markets all week.

For Angela Merkel, the German chancellor, whose popularity is already on the wane over her open-door refugee policy, a bailout of Deutsche would be political poison. Putting taxpayers on the hook for the hard-charging investment bank would cause Ms Merkel severe political damage ahead of next year’s parliamentary elections. Abroad, it would provoke accusations of double standards, since Germany has insisted that private bondholders in other European countries to take losses before governments wade in.

“If [the chancellor] now has to squander taxpayer money again to rescue a failed bank, then she shouldn’t bother to run again,” Sahra Wagenknecht, co-leader of the Left party, said earlier this week. “It would be a total disaster.”

Mr Cryan insisted this week that the bank does not need state assistance. With a core tier-one ratio — a key measure of financial health — of 10.8 per cent, the bank’s capital position is far stronger than during the financial crisis, and comfortably above what regulators demand. With €215bn in liquidity reserves, it has a significant cushion against a funding squeeze. Yesterday it stressed that the behaviour of the vast majority of its 800-odd hedge fund clients was unchanged in recent days.

A senior banker with close ties to Deutsche blames the recent spate of bad news on rumours spread by hedge funds that have bet on a fall in the bank’s share price. “This is in their playbook — they are trying to drive the shares down to €8 and then buy them back,” he says.

The bank insists it will not pay anything close to the $14bn demanded by the US Department of Justice. Insiders hope that it will be treated in a similar fashion to Goldman Sachs, which faced an initial claim for $15bn from the DoJ before settling for close to $5bn. Deutsche has set aside €5.5bn in reserve.

Goldman, however, was able to conduct its negotiations in secret. In the Deutsche case, the DoJ’s opening gambit became public just weeks before the US presidential election, which could make it harder to negotiate down.

Muddying the waters further, there are now indications that Deutsche’s settlement could end up being rolled into a broader deal including Barclays and Credit Suisse.

“I’m worried that the banks are in the middle of a political game between the US and Europe,” a debt investor at a large UK fund says. “The concern is that when it comes to Deutsche, Credit Suisse, Barclays, the DoJ can do whatever it wants . . . People are scared.” 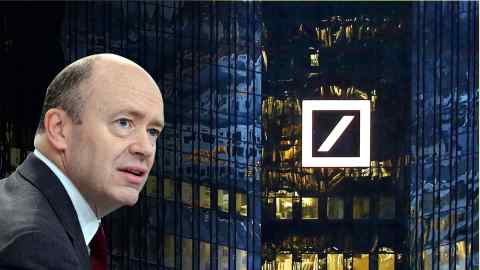 Those focused on financial stability point a finger at the US authorities. “I’m very upset that the information about the $14bn was leaked,” says one European policymaker. “It’s a disgrace.”

Looking for its day in court

If Deutsche is unable to persuade the DoJ to lower its sights, it still has options. Crucially, the $14bn is a settlement demand not a fine, so Deutsche only pays it if it agrees to.Mr Cryan’s insistence that a state bailout is “out of the question” suggests Deutsche would rather risk going to court than settling at a level that would force the bank to seek additional capital from investors or even from the state.

Alternatively, the bank could seek to foot the bill by selling parts of its business. Deutsche has agreed a €1.09bn deal to sell its Abbey Life insurance business, and is waiting for Chinese approval to complete the disposal of its €3.7bn stake in local lender Hua Xia. With less success, it is also trying to sell Postbank, the post office bank it bought in stages from 2008.

“They could sell more businesses if they had to, such as their European retail network,” says one of Deutsche’s top 10 investors. “At a push, they could even sell their asset management business — although that would be a bitter move.” An asset management sale — ruled out by Mr Cryan two weeks ago — could raise €8bn, analysts estimate.

In addition to disposals, Deutsche could seek to close the capital gap left by a big fine by shrinking its balance sheet, the investor says, pointing out that the bank has been securitising some of its loans in a bid to free up capital.

Both approaches might plug a short-term capital hole, but neither would do the bank much good in the longer term. Selling businesses such as Deutsche’s European retail network or its asset management division would make the bank more dependent on its volatile investment banking arm. Cutting assets would also shrink its revenues. Neither would be easy to do quickly. 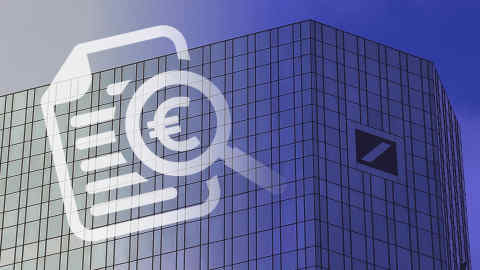 To avoid such damage, Deutsche could instead seek to raise capital. The bank currently has authorisation from its shareholders to increase its share count by almost 50 per cent if needed. The question is who would buy them. One of Deutsche’s top 20 investors says the idea that the bank could raise capital at current prices is “illusory”.

“The dilution would be enormous,” he says.

The top 10 investor is also sceptical. “One thing I can rule out is participating in a capital increase just to fund litigation. There has to be some perspective on how they will set themselves up [to be successful] in future.”

A key worry is the bank’s depressed earnings power. Investors were resigned to the return on equity being below 3 per cent next year. That could get worse if the turmoil hits business and more clients follow the hedge funds’ lead.

If neither asset sales nor a capital-raising provide Deutsche with the cash to resolve its litigation issues — which also includes an investigation into trades involving its Russian business — then the German government would face a choice between bailing in the bank’s creditors or bailing it out.

“If push comes to shove, the German government would contribute because Deutsche Bank is the only global bank that Germany has,” says Marcel Fratzscher, head of the DIW think-tank. “The industrial companies would say so. So the government would step in, but a lot would have to happen before then. And there would be tight conditions.”

In public, German officials merely point out that banks in need of financial rescue must follow European procedures, which Germany fought to put in place after the 2008 global financial crisis. Jens Spahn, deputy finance minister, told the Financial Times: “I am not taking any view about the situation of any individual institution. The European Central Bank is responsible for the question of the financial and accounting capital position of banks. The mechanisms are set out at the European level.”

In private, European regulators and officials acknowledge that in an emergency, there is scope under European rules to inject state funds to support a bank, as long as it is done in line with market conditions.

Despite the hedge funds’ moves, other counterparties are, for now, more relaxed about Deutsche. “Even US banks who are typically prone to throwing Europeans under the bus seem to view it [Deutsche’s travails] as a damp squib,” says a senior executive at a large institutional investor.

Until Deutsche resolves its litigation, however, markets are likely to remain on edge. “I don’t think Deutsche needs a bailout at this point. Their capital and liquidity is absolutely sufficient,” says Jörg Rocholl, president of Berlin’s ESMT business school. “But the constant uncertainty and speculation does not help. Banks depend to a great extent on confidence — and the risk is that once it is gone, it is very hard to get back.”