We use cookies (opens in new window) for a number of reasons, such as keeping FT Sites reliable and secure, personalising content and ads, providing social media features and to analyse how our Sites are used.
Manage cookies
Accept & continue
Tech start-ups

Joyeeta Das was taking a break from business school classes, enjoying the early morning sunshine in Oxford’s Port Meadows when she had her start-up eureka moment.

It was not, however, the view of the city’s dreaming spires that struck her. Ms Das, an engineering graduate, realised that there were connections to be made between the visual stimuli around her and a potential to turn that data into a service.

“It suddenly seemed to me that the sunrise and the grass and the world make sense to me not one at a time but because they are all together,” she recalls.

“We try to dissect things and technology always ‘unlayers’ data but there is now the time, the age, when we need unifying technology, a system that brings things together.”

The result of this thought process was Gyana, a technology company that translates big data into more easily understood 3D images for a range of government and corporate clients, from estate agents to Nasa.

At the core is an app that taps into satellite technology to create images that highlight the different moods of pockets of the population, fitness heat-maps of neighbourhoods, trending topics, transport and weather.

It has a sentiment index, so if a politician was giving a talk, for example, the system would show what people in the crowd were feeling through things like social media.

When she had her idea Ms Das was completing an MBA at Saïd Business School. She describes the support from Saïd — including money, mentorship, space to work and its business education — as “beyond useful”.

Ms Das, an Indian national, was able to remain in the UK to build the business thanks to an entrepreneur’s visa awarded by Saïd on the strength of her business plan.

Ms Das credits “the power of the university network” in helping her find staff for Gyana, which has a team of a dozen people from 11 countries, covering such diverse fields as physics, engineering and philosophy.

Her first £100,000 of investment came from a student friend in her class, and she has had mentoring support from her former tutors, including Thomas Hellmann, Saïd’s entrepreneurship professor, who also runs the Entrepreneurship Centre where Gyana is based. 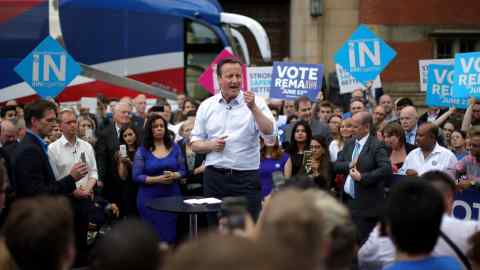 Before starting her MBA, Ms Das admits she had “no idea” about the key concepts of finance, which have since proved essential, not least in pitching the company to further investors.

The company is closing a $10m series-A funding round, having raised just over £1.2m in its seed round from two family funds, Almington Capital, in Chicago, and UK-based Quivira Capital.

Ms Das believes there is a significant market and that scale-up is essential before any competitors catch up. At the moment “we are only scratching the surface”, she says.

The company is targeting professional services companies, such as estate agents, architects and real estate developers, for which location-based data are valuable.

Gyana could be used to research the impact of a gym or grocery store on levels of health, fitness and mood in a particular neighbourhood.

The biggest challenge has been articulating this broad and ambitious vision to investors, especially in the UK, according to Ms Das.

She has found they are not altogether convinced by her grand vision and tend to prefer a small niche business plan, a five to seven-year exit under £500,000 and a quick go-to market. “Unlike [Silicon] Valley they are not that interested in unicorns or big plans,” she says.

Ms Das admits it has been a struggle to find ways around this and believes she needs to find those investors who are willing to take more of a risk. “We need to find people . . . who can see potential in long shots,” she says.

Managing her personal and professional life is also a struggle. “My husband is my co-founder, and an ex-Oxonian, and helps me a lot. But it is indeed tough,” Ms Das says. “I deal with this by starting my day with meditation and empowering myself with extra mental energy and good physical health.”

Managing and motivating people in what can be high pressure situations can also be difficult — like “hitting a moving target while one is riding a horse”.

The team is working with Nasa, using the technology that underpins Gyana, to help the space agency more efficiently interpret satellite imagery that is taken from places such as the International Space Station.

One of the goals of Gyana is to make technology more intuitive and empowering, according to Ms Das, who boasts that her company’s software allows people to explore and learn, as a child might, without any limitations or fixed data points.

“Instead of responding to one specific query, we need to open up the wide array of responses to questions,” she says. “This will broaden human imagination and intuition and help us become more powerful as a species.”