The next virus pandemic is not far away | Free to read

In a broken world struggling to recover from coronavirus, a new pandemic threatens to destroy the remnants of mankind. That is the storyline of Covid-21: Lethal Virus, a TV movie in post-production that imagines another coronavirus will emerge next year.

The low-budget film is unlikely to win any Oscars, but many scientists believe its premise is not far-fetched. The Covid-19 pandemic, which follows the Sars and Mers outbreaks, marks the third time since the turn of the century that a coronavirus is thought to have jumped from bats to humans before morphing into an epidemic.

Coronaviruses are thought to have been circulating in bats for centuries but have only recently become a leading source of zoonotic diseases, alongside other illnesses that originated in animals such as HIV, Ebola and Zika.

Scientists blame the increase in the spillover of pathogens from animals on two trends: rapid globalisation and humanity’s cavalier interaction with nature. This means disease outbreaks and pandemics are likely to emerge regularly unless the trends can be checked or reversed, they warn.

“The coronavirus pandemic is completely unsurprising,” said Aaron Bernstein, director of the Center for Climate, Health and Global Environment at Harvard University. “We knew before this happened that two-thirds, if not three-quarters, of emerging infections were occurring because of the spillover of pathogens from wild animals into people.”

Dr Bernstein said the primary reason for the crossover was the change in how people engaged with nature, such as rapid deforestation and the global wildlife trade.

“There are no free lunches in nature,” he said. “We swim in a common germ pool with other animals. If we stretch the fabric of life too far, things pop out of that germ pool and they land on us.”

Construction of logging roads to extract timber created access to deeply forested areas previously largely untouched by humans, Mr Epstein said, bringing them into contact with disease-carrying wildlife. Displacement of animals that lived in those forests also forced them to find new habitats, increasing the chance of them spreading pathogens to other species, including humans.

Joe Walston, senior vice-president at the US-based Wildlife Conservation Society, also pointed to the trade in wildlife for products such as exotic food, fur and alternative medicines.

“We have had zoonotic diseases in the past, but they’ve been rare with large periods of time between the outbreaks,” he said. “Now, the regularity . . . is increasing. And it will continue to increase until we decide to reassess our relationship with trading animals.”

Initially, Chinese health officials thought Covid-19 had jumped from an animal to a human at a Wuhan food market where wildlife was sold. More recent evidence suggests the virus originated elsewhere, but the number of people who fell sick after shopping there indicates it played a crucial role in spreading the illness, say experts.

“We know from past experience with coronaviruses, including Sars, that these viruses are able to spread within market systems,” Mr Epstein. “The Wuhan market looks to have served, perhaps, as an amplification centre, if not the exact beginning of the outbreak.”

While deforestation and the wildlife trade are blamed for diseases spilling from animals to humans, globalisation can turn outbreaks into pandemics.

“These are the matches that light the pandemic fires, but the fuel on the fire is the globalisation of humanity and the increasing population density in cities,” said Dr Bernstein.

Fifty years ago, it would have been much harder for Covid-19 to spread from Wuhan to the rest of the world. The city’s residents had neither the means nor option to travel, and its airport was built only in 1995 and did not start international flights until 2000.

Scientists think Ebola crossed into humans long before the first recorded outbreak in the Democratic Republic of Congo in 1976. The chief difference in the 2013-16 outbreak, which spread across west Africa, was that the first infection was thought to have been in a village in Guinea close to the borders of Sierra Leone and Liberia.

“There was enough connectivity, the roads were good enough that cases of Ebola — for the first time in history — made their way to capital cities where suddenly there were millions of people available to be infected,” said Mr Epstein. “It was a little campfire that was able to become a long sustained bonfire.”

Because reversing urbanisation is not a realistic option, scientists say more must be done to build public health infrastructure and disease monitoring systems. 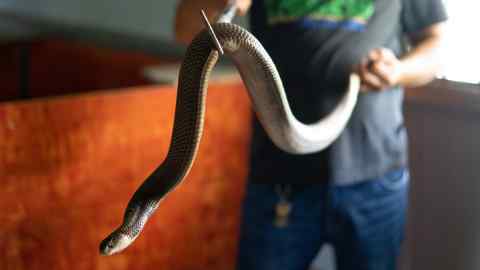 “Knowing the frequency with which new viruses are occurring and what climate change does to animal ecosystems, it’s safe to assume we’re likely to have more of these,” said Helene Gayle, chief executive of the Chicago Community Trust and a former government health official at the US Centers for Disease Control and Prevention.

Dr Gayle said the US needed to create “good [disease] surveillance systems” while acquiring the ability to develop vaccines with speed and precision.

In a recent article in the journal Science, Dr Bernstein called for governments to spend a combined $22bn a year on preventing deforestation and regulating the wildlife trade.

He also recommended spending hundreds of millions of dollars on systems to detect and control disease outbreaks, including a “library of virus genetics” that could be used to pinpoint emerging pathogens quickly enough to stop their spread.

The suggested sums are vast. But, Dr Bernstein noted, they are a fraction of the economic and human costs of Covid-19, which economists have predicted could reach $10tn-$20tn — up to a quarter of the $81tn global gross domestic product.

“The economics of this couldn’t be clearer,” he said. “Spending a fraction of what the costs are from just a few of these diseases — to reduce the risk of spillover by even a per cent — would be wildly cost-effective.”