Start a 4-week trial
US trade

Trump taunts EU on trade: what is at stake at Juncker meeting?

Despite the threats, both sides are signalling the possibility of new deals

Donald Trump has taunted European leaders ahead of a difficult meeting on Wednesday as the US and EU risk sliding into an ever more damaging trade war.

The US president took to Twitter on Tuesday morning to send the message that Jean-Claude Juncker, president of the European Commission, was only willing to talk to the US on trade now that Washington is slapping tariffs on their goods.

“Countries that have treated us unfairly on trade for years are all coming to Washington to negotiate. This should have taken place many years ago but, as the saying goes, better late than never!” he wrote.

“Tariffs are the greatest! Either a country which has treated the United States unfairly on Trade negotiates a fair deal, or it gets hit with Tariffs. It’s as simple as that — and everybody’s talking! Remember, we are the “piggy bank” that’s being robbed. All will be Great!” he added.

The Twitter posts will further complicate the scheduled meeting, which was hoped to de-escalate tensions on tariffs and slow the moves towards a damaging trade war between the two blocs.

The first round is already under way, with the US imposing a 25 per cent tariff on steel imports and a 10 per cent tariff on aluminium. The EU responded with tariffs on $3.2bn of iconic US goods, including Bourbon whiskey, peanut butter, motorcycles and blue jeans.

Round two is imminent. Mr Trump has threatened to impose a 25 per cent tariff on imported vehicles using the justification of protecting US national security. This would affect almost $50bn of European exports, with Germany hardest hit. The EU is drawing up a new list of US products to tax in retaliation.

However, despite the threats and bad blood, both sides are dangling possible new trade deals in front of each other.

Does the US have a strong case against EU trading practices?

No. The EU and US have very similar and low levels of tariffs on goods. Even though some trade is deterred by specific high tariffs on both sides of the Atlantic, the average weighted tariffs applied by the EU on US goods were 3 per cent in 2015, a little lower than the US equivalent of 3.3 per cent in the same year.

Mr Trump’s complaint in a CNBC interview last week that “for years we have been losing $150bn with the European Union and they are making money easy”, relates to the US bilateral goods trade deficit with the EU. This is a product of a healthier US economy and a surplus in services rather than unfair European trade practices.

When Steven Mnuchin, US Treasury secretary, called at the G20 meeting in Buenos Aires last weekend for trade on a “fair and reciprocal” basis, economists would say this already applies to transatlantic commerce.

Is there a potential US-EU deal on the table?

Yes, if you take politicians’ statements at face value. At the G20, Mr Mnuchin said: “If Europe believes in free trade, we’re ready to sign a free trade agreement.” He insisted that any deal required action on tariffs, non-tariff barriers and subsidies. “It has to be all three issues,” he said.

European finance ministers object to what they see as the US bullying tactic of making trade overtures “with a gun to the head”, as Bruno Le Maire, French finance minister has put it. But European officials are mostly attempting to defuse the rhetoric and seek to avoid any escalation in the trade war.

Trade Secrets
Why Trump is feeling increasingly emboldened on trade 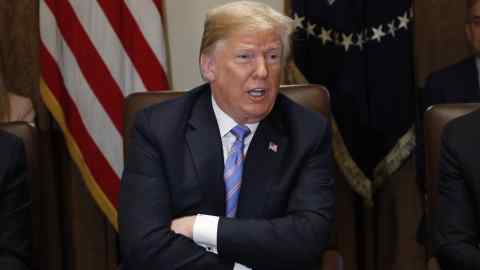 Pierre Moscovici, European economics and financial affairs commissioner, said: “We were in mutual listening mode and I hope that this is the beginning of something.”

Meanwhile, Europe has floated an idea for all leading economies to drop car tariffs globally to zero.

Is talk of a trade deal mostly for public consumption?

Sadly, yes. The signs are that Mr Trump does not want a deal but instead talks of now being a perfect time to have a trade war because the stock market and US economy are riding high. “We’re playing with the bank’s money, right? We’re [the stock market] up almost 40 per cent,” he said last week.

Talk of a trade deal between the US and the EU on the basis of tariffs, non-tariff barriers and subsidies is little short of a call to reopen the Transatlantic Trade and Investment Partnership talks, which were put on hold two years ago.

But even before Mr Trump brought an aggressive new trade stance to the White House, TTIP had hit the rocks because neither side was willing to make the necessary compromises.

“The EU and US tried to bunch together all the trade disputes they had been having for decades [in the TTIP negotiations], but the differences in regulatory culture, different levels of precaution and desire for protection in different sectors proved too high a hurdle,” said Sam Lowe, senior research fellow at the Centre for European Reform.

How bad could a US-EU trade war become?

It is very uncertain, but no one would be a winner. The direct costs to each side purely from tariffs tend to be small, but the uncertainty will generate knock-on effects from loss of confidence and disrupted supply chains.

The IMF has estimated that if a trade war hits confidence, it could knock 0.5 per cent off the global growth rate. Meanwhile, Mark Carney, Bank of England governor, cited BoE estimates suggesting a full-blown trade war could knock more than 2 per cent off global growth rates if 10 per cent tariffs were applied widely. There would also be knock-on effects for confidence, he said, citing Britain’s soggy economy since the Brexit vote.

“The experience of Brexit underscores that the impact of a global trade war will be greater the more business confidence is affected, the more financial conditions tighten and — most fundamentally — the more permanent the loss of openness is expected to be,” Mr Carney said.