Tantalising glimpse of an EU compromise on freedom of movement

In April 2005, the mayor of Maubeuge, a town in northern France, sent a list of local plumbers to Frits Bolkestein, the straight-talking former Dutch EU commissioner. Mr Bolkestein was the author of a controversial EU directive that opened up local services — from hairdressing to ski lessons — to competition across the bloc. In a press conference, he had declared that he was looking forward to using the services of a “Polish plumber” because he couldn’t find a good local one for his holiday home near Maubeuge.

His comments, unsurprisingly, caused outrage in France. A band of guerrilla electricians cut off the power supply to his property in protest. When the Bolkestein directive was finally adopted by MEPs in 2006 there were mass protests in Strasbourg.

The controversy in western Europe about the impact on wages and working standards of “Polish plumbers” — now a shorthand term for all workers from lower-wage EU economies — has not abated since. Last month, MEPs finally agreed on a revision of the Posted Workers directive. Its aim is simple — to limit wage competition when workers from central or eastern EU countries are posted by employers to other, higher-wage economies in the EU.

At the same time, various member states are deploying caveats to limit freedom of movement. Belgium has expelled thousands of unemployed EU citizens. In Germany, EU nationals have to apply for a residence card if they wish to work. This card can be withdrawn for various reasons, after which the holder is required to leave Germany or be forcibly expelled, and is automatically denied re-entry. In France, some local and regional authorities have even insisted — contrary to EU law — that the use of the French language should be compulsory on public building sites.

All this exposes the orthodoxy that has long prevailed in diplomatic and administrative circles, in Brussels and other EU capitals, as a myth — namely, that continental concern is only about migration from outside the EU and that the British are unique in their preoccupation with the movement of people within the bloc.

World
France and Italy ramp up dispute over migration 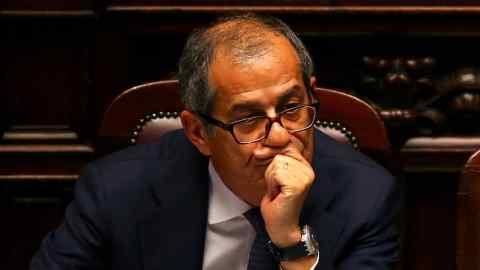 In truth, the saboteurs who cut off Commissioner Bolkestein’s power lines are unlikely to have made a distinction between workers from eastern European countries and far-off nations elsewhere. Nor are the millions of voters who have, in recent elections, supported anti-immigration parties in Poland, Hungary, Austria, Slovenia and now Italy. A general impression that the EU’s collective approach to immigration is serving them poorly is what counts.

Political leaders recognise this. Speaking to a gathering of centre-right parties in Munich earlier this month, Germany’s chancellor Angela Merkel declared: “If we are unable to come up with a common response to migration challenges, the very foundations of the EU will be at stake.”

But she and fellow EU leaders should now go one step further, as some believe in private. As they seek to reinforce the EU’s external borders and adopt a more rational and humane way to accommodate asylum seekers, they should also strengthen the caveats that apply to freedom of movement.

The belief that freedom of movement is an untouchable principle cannot remain unchallenged. Member states already apply heavy, lawful limits to it. And in February 2016, negotiating with David Cameron who was then UK prime minister, the EU27 agreed that “free movement of workers may be restricted by measures proportionate to the legitimate aim pursued”.

Most tantalisingly of all, as the wheels come off UK prime minister Theresa May’s ever-more-chaotic approach to Brexit, an overture from the rest of the EU to reform external and internal immigration could be just the compromise that is needed to pave the way for a wider rapprochement between the UK and the EU.

The writer is a former UK deputy prime minister Donald Trump provoked outrage this week by separating families at the US-Mexico border, before making a U-turn on the policy, while Spain allowed a boat with hundreds of migrants on board to dock after Italy and Malta refused them. Here’s the best of our comment and analysis