Upheaval in Italian markets blindsides those who had disregarded political dangers

Until this weekend, many investors thought eurozone politics were inevitably messy but no longer had the power to trigger volatile and disorderly markets. Italy has forced a rapid and painful reappraisal.

Those exposed to eurozone markets, and Italy in particular, are nursing heavy paper losses after near unrelenting selling in bonds and equities since Friday. The shift in markets has been profound, ensnaring the debt of other peripheral countries such as Portugal and hurting banks as investors contemplate the possibility of Italy’s political turbulence escalating into another eurozone crisis.

The scale of the moves in Italian debt has stunned some. Italy’s two-year government bond price has plunged over the past three trading days, sending its yield soaring from 0.27 per cent to as high as 2.72 per cent on Tuesday. The 10-year bond yield has jumped from 2.4 per cent to a high of 3.39 per cent over the same period.

“Things could get worse before they get better,” said Luke Hickmore, senior investment manager at Aberdeen Standard Investments. “Italian yields at this level are really only reflecting the uncertainty in the country’s politics. If second-order impacts, like leaving the euro, were being priced in — then yields would be much higher.”

Hefty selling has engulfed Italian bank bonds and the country’s blue-chip equity index, which has fallen more than 7 per cent in the past week. Since banks represent nearly half the FTSE MIB, the bourse is now down for the year and been stripped of its status as the best-performing major European share market in 2018.

The pressure on Italian markets prompted Ignazio Visco, governor of the Bank of Italy, to warn that Italy is “a few short steps away” from losing the “asset of trust.” And there is little to suggest investors can expect much respite from volatility as they await signs of a circuit breaker that lures buyers back to the bond and share markets.

“It is almost impossible to say what the fair value of BTPs (as Italian bonds are known) is because it is currently driven by politics and also very poor sentiment and almost no liquidity,” said David Tan, global head of rates at JPMorgan Asset Management. “We have to watch by the sidelines while the fire burns itself out.”

Buying periphery sovereign debt, and especially Italy, had been very popular with large European funds since the start of the year, according to a fund manager who did not want to be named. “There have been revived inflows from cross-Europe asset managers. The risk premium was very low,” this person said.

That lack of a risk premium duly left debt owners exposed when Italian yields began to shift upwards earlier this month. As the selling accelerated in recent days, many investors were blindsided by the fast-moving political developments, leaving them reluctant to trade.

An investor at a major European asset manager identified three catalysts for easing the febrile mood in markets: “Valuations bringing out the domestic buyers, stability in the news flow, or [European Central Bank] action — though that is very unlikely.”

The ECB’s room for manoeuvre is limited. Since January, the central bank has been buying fewer bonds under its quantitative easing programme and was expected to call time on such support measures later this year.

Alberto Gallo of Algebris Investments, and who in recent weeks has shifted from owning Italian debt to being net short, said: “Normally at this point the ECB would step in but we may be moving towards a clear confrontation between the ECB and Italian populist parties.”

Even the abrupt surge in yields may not prove enticing at this juncture.

One hedge fund manager in London said he had begun shorting Italian debt last week, but had been reluctant to build a large position because of ongoing political uncertainty. He said the jump in short-dated Italian debt yields make it appear superficially attractive, but that for the same reason he was unwilling to buy.

“What we are seeing in Italian debt seems to be more of a buyers’ strike, with Italian banks not seemingly willing to step in and support the market. All the macro hedge funds are putting on short positions but it doesn’t seem at the moment like this is being done in large amounts,” this person said. 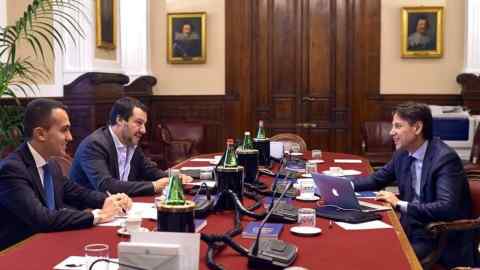 Unlike during the eurozone debt crisis of 2011, investors outside the eurozone have only limited exposures to periphery countries’ sovereign debt, suggesting losses are likely to be more regionally concentrated than in the past. “The [bond]-holding structure suggests that foreign selling will not be as protracted as in 2010 and ’11, which should stabilise the front end eventually,” said Giovanni Montalti, an analyst at UBS.

Still, as the likelihood of new elections raises the possibility that the vote will be a referendum on Italy’s membership of the euro, the worry is that Italian yields could still have further room to rise before eurozone buyers emerge.

An auction of €5.5bn of six-month debt on Tuesday was a striking illustration of how rapidly sentiment has changed. It came at a yield of 1.213 per cent; when Italy last sold six-month debt at the end of April, the yield was minus 0.42 per cent. With €270bn of debt set to mature by the end of this year, Italy needs to refinance 14 per cent of its total borrowings by the start of 2019. Although yields are still low by historic standards, the sell-off will feed through into the country’s debt-servicing costs — potentially threatening its economic and fiscal outlook.

Over the weekend, Italy’s President Sergio Mattarella pointed to “alarmed investors” as he blocked the appointment of a Eurosceptic finance minister. Forty-eight hours on and it is hard to find many investors confident they know how to price the country’s political risk.

Video: Italians on their guard against damage to democracy

Get alerts on Italian politics when a new story is published 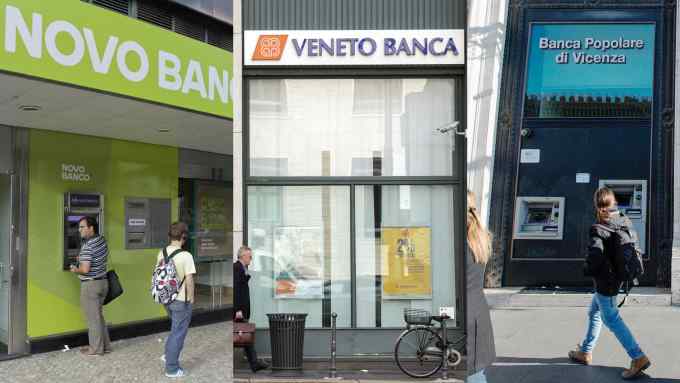 Italy has finally formed a government but it has been a turbulent week in the markets, with the effects felt across the eurozone. What lies ahead for the bloc’s third largest economy? Here’s the best of our opinion and analysis