Arash Massoudi in London and Richard Waters in San Francisco

Saudi Arabia has slashed its exposure to Tesla less than four months after the carmaker’s chief executive Elon Musk settled fraud charges over his claim the kingdom was ready to back a management buyout.

The Saudi Public Investment Fund hedged most of its 4.9 per cent stake in Tesla with the help of bankers at JPMorgan Chase after the market closed on January 17, according to four people with direct knowledge of the trade.

The arrangement means that, although it still holds the shares, the Saudi sovereign wealth fund is left with little exposure should the price fall. Its potential gains are also capped if the stock rises, freezing its $2.9bn bet on the company.

The move, through a hedging programme put in place this month, marks the latest twist in the relationship between Mr Musk and the Saudi state fund overseen by the powerful Crown Prince Mohammed bin Salman.

“To the best of my knowledge, there has been no communication with PIF for months,” Mr Musk said in an email to the Financial Times. “I thought they had probably sold their shares. We don’t know if they own any at all.”

The FT reported in August that the Saudis had built a 4.9 per cent stake, making it one of Tesla’s top-five shareholders. Minutes after the FT revealed that investment, Mr Musk tweeted he was close to arranging a buyout of Tesla, precipitating a months-long crisis that resulted in civil charges from US regulators.

The Tesla chief later claimed the Saudis had been ready to back his buyout plan, giving him the confidence to declare he had “funding secured”. However, the Securities and Exchange Commission charged Mr Musk with making “false and misleading statements”, leading to a settlement in which he paid a personal fine of $20m and agreed to step down as chairman.

The new hedging arrangement has turned out to be well-timed. A day after it was put in place, the stock fell sharply when Mr Musk revealed Tesla was cutting 7 per cent of its workforce and warned that it was facing a “very difficult” period.

On the day of Saudi Arabia’s hedge, Tesla shares closed at $347.26, valuing the PIF shares at $2.9bn. The stock price has since fallen about 15 per cent. The Saudis and JPMorgan declined to comment.

Tesla’s stock is a battleground for short-sellers and those who believe in Mr Musk’s vision for the company, which means every piece of information — including tweets — from the company or its founder has the potential to send shares moving wildly. Mr Musk’s claim he had full backing for a buyout produced a spike in Tesla’s shares, dealing out big losses to investors who had bet against the company.

Saudi Arabia was regarded as an unlikely Tesla backer given its dependence on oil, but under Prince Mohammed the kingdom has been looking to diversify its economy and holdings away from oil.

The FT previously reported that the Saudi sovereign wealth fund initially approached Mr Musk about acquiring newly issued shares in the business but was rebuffed.

Instead, it bought the shares in the open market in April and May when Tesla shares traded below $300. The hedge at $347.26 means the Saudis are probably sitting on a gain from their investment. Tesla shares fell on Monday after the FT revealed the Saudi hedge, dropping as much as 2 per cent before recovering in afternoon trading. 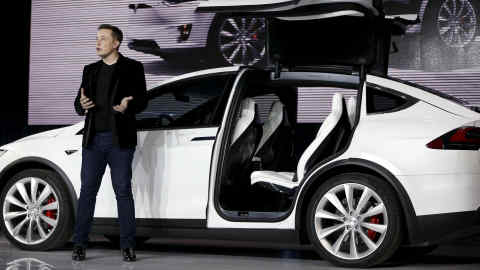 Mr Musk has claimed the Saudi fund had approached him multiple times about taking the company private. But the SEC concluded he “did not have an adequate basis in fact” for claiming he was close to a buyout and that “investor support [was] confirmed”.

More recently, the high-profile Saudi bet on Tesla became a focal point in the fallout from the murder of journalist Jamal Khashoggi in October in the Saudi consulate in Istanbul. Asked in an interview weeks after the incident about whether the carmaker would take further investment from Saudi Arabia in the wake of the killing, Mr Musk said he “probably would not”.

The derivative used to put on the hedge is known as an equity collar, a bespoke instrument that is costly to finance but has become popular with Middle Eastern and Asian investors.

The people with direct knowledge of the trade did not give the Saudi fund’s rationale for putting the collar in place. Such hedges are normally used to protect large holdings from volatile price swings; locking in profits without selling shares would allow Saudi investors to exert influence at the company without having to be entirely subject to its share price fluctuations.