The publisher of The New York Times has raised the possibility that the Trump administration withheld information that one of the newspaper’s journalists faced arrest while on assignment in Egypt.

Recounting an incident from two years ago, AG Sulzberger said a US government official called the newspaper warning that the Egyptian government was planning to arrest Declan Walsh, a Times reporter.

Mr Sulzberger said the official believed the Trump administration “intended to sit on the information and let the arrest be carried out”, and had contacted the Times without White House permission for fear of punishment.

“Unable to count on our own government to prevent the arrest or help free Declan if he were imprisoned, we turned to his native country, Ireland, for help,” Mr Sulzberger said on Monday evening at Brown University in Providence, Rhode Island.

“Within an hour, Irish diplomats travelled to Declan’s house and safely escorted him to the airport before Egyptian forces could detain him.”

This isn’t just a problem for reporters; it’s a problem for everyone, because this is how authoritarian leaders bury critical information, hide corruption, even justify genocide

The speech marked the latest escalation of tension between the White House and the 168-year-old newspaper. The US president has accused the paper of peddling “fake news”, describing it as “failing” and an “enemy of the people”.

Mr Trump also has lashed out at media organisations such as CNN, MSNBC, The Washington Post, and even Fox News. Mr Trump in August tweeted that Fox News “isn’t working for us any more”.

Mr Sulzberger on Monday slammed Mr Trump for his “anti-press rhetoric”, arguing that this had contributed to the targeting of journalists by countries across the globe.

“This isn’t just a problem for reporters; it’s a problem for everyone, because this is how authoritarian leaders bury critical information, hide corruption, even justify genocide,” he said.

Mr Sulzberger also sparred with Mr Trump this summer, after the president accused the newspaper of treason for its reporting about US cyber attacks on Russia’s power grid. In an opinion piece published in The New York Times, Mr Sulzberger, the scion of the family that has run the paper for more than a century, said the president had “crossed a dangerous line”. 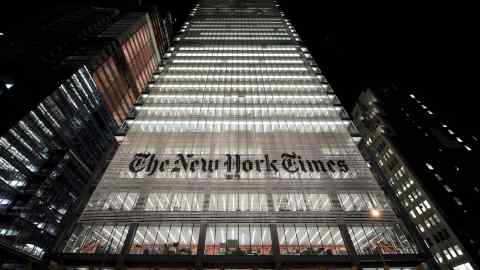 The news media has suffered a decline in public confidence in recent years, a phenomenon that Mr Sulzberger argued was “planted right here, in a country that has long prided itself on being the fiercest defender of free expression and a free press”.

Mr Trump’s attacks on journalists have particularly resonated with his voters, according to polls. Some 48 per cent of Republicans polled by Ipsos last year agreed with the idea that “the news media is the enemy of the American people”.