Why HS2 rail line is way over budget and badly delayed

Unexpected mix of soil conditions, miscalculated land values and poor governance are all to blame

We’ll send you a myFT Daily Digest email rounding up the latest HS2 news every morning.

The managers of Britain’s flagship infrastructure project have found a new excuse for the ballooning costs of the contentious High Speed 2 rail project: they were unable to dig in a straight line through the English countryside.

Planners working on the line failed to anticipate the challenges of passing through porous salt-mines, chalky rubble and ancient woodlands, partly because the ground conditions were “significantly more challenging than predicted”, according to HS2’s chairman.

Capable of the highest speeds in the world and running below ground level or in tunnels for two-thirds of its length in the first phase to Birmingham, HS2 was always ambitious. But few expected its costs to spiral out of control before a single meter of track had been laid.

Earlier this month, HS2 announced that the projected bill for the new railway had soared by £26bn to £88bn.

The explosion in costs caps a decade of political and financial problems for the proposed railway, which was first sold as an alternative to a third runway at Heathrow or an extension to the existing high-speed rail link to Europe, but now has no direct connection to either.

Unforeseen complications with ground conditions, miscalculated land values and poor governance have all helped push up the price. Already under fire for mismanagement and conflict of interest concerns, HS2 Ltd, the taxpayer-funded body charged with delivering the project, stands accused of either failing to understand the financial consequences of the engineering challenge it had accepted or trying to keep the true cost from the public.

More than £7.4bn has already been spent on the line, including the cost of expropriating 900 homes, farms and properties at a cost of £2.2bn.

Ten years after the controversial infrastructure project was agreed, Boris Johnson, the prime minister, has ordered a review that will decide by December whether construction of the line can begin — or whether the project will be scaled back or cancelled.

Should it go ahead, the first phase of HS2 will run from London to Birmingham; a second Y-shaped section will go on to Leeds and Manchester, but is awaiting parliamentary approval. The entire project would not be completed until 2040 — if there were no more delays.

HS2 argues that “transformational” benefits of the line, which could carry 100m passengers a year, are underestimated.

But the controversy over the railway comes at a time when growth in passenger numbers is declining across the UK network, throwing further into question a project predicated on the need for additional capacity.

Groundworks have driven up costs

Having committed to 50km of tunnelling on the route to Birmingham, partly to fend off angry Conservative voters in the picturesque Chiltern Hills, HS2 engineers found that digging through hundreds of different soil types was more laborious than they first thought.

A crucial mis-step by the company appears to have been the failure to carry out extensive studies of ground conditions prior to the HS2 bill, which received parliamentary approval in 2017.

Instead, estimates were derived from “desktop drawings . . . and without the benefit of any investigation of ground conditions or similar levels of detail across all areas of scope”, said Allan Cook, chairman of HS2. As a result, he added, the “stations, railway systems and integration plans are all less well developed than would be expected at this stage”.

HS2 said it could not undertake extensive studies before the line was approved by parliament because it “didn’t yet have the legal powers to access land”.

But the ramifications of the omission are extensive. Several of the soils are soft and fine, requiring additional stabilising with concrete piles. The quick change in soil types along the route — there are more than 20 varieties along just one 20 mile stretch of the central section — is also causing difficulties.

Additional time is also needed to let parts of the earth settle after “ground heave” — caused when the surface soil is removed, swelling the clay and potentially cracking bridges and tunnels.

Critics argue that these costs could have been avoided had planners paid closer attention a decade ago to what lay in the path of the planned rail route.

“There have been issues recognised and pointed out to HS2 all the way through, since 2010,” said Haydon Bailey, a chartered geologist and honorary lecturer at Birmingham university who advises the Chiltern Society, a community lobby group.

He accused HS2 engineers at the Commons inquiry ahead of the parliamentary bill of relying on the last geological map of the Aylesbury area, which was published in 1923 — though this was disputed by HS2, which said the map was updated in 1990 and that this was “just the starting point for study”.

It is not the first time HS2 has been criticised for failing to carry out accurate assessments. Whistleblowers argue they were pushed out of the organisation after pressing for more detailed cost analysis of property purchases on what has become the biggest land acquisition programme since the second world war.

Former staff members, including Doug Thornton, one of the company’s six directors of land and property in the project’s first five years, say that HS2 had “absolutely no idea” how many parcels of land needed to be bought. Mr Thornton said he had been asked to value roughly 11,000 sites in just a month before the budget was put before MPs. He was dismissed shortly after.

His analysis was effectively confirmed by the National Audit Office last year, which found that HS2 had severely underestimated property costs and that land and property owners were not being paid on time, causing substantial emotional and financial distress.

Budgets balloon amid a culture of secrecy

Ballooning budgets and a weak grip on planning jarred with HS2’s decision to pay lavish salaries and bonuses to senior managers. Last year it emerged that nearly a quarter of the 1,346 staff were paid more than £100,000 in 2018, with 15 on more than £250,000 — though HS2 said the number of such highly paid employees has subsequently fallen. Mark Thurston, the chief executive, is Britain’s highest paid civil servant, and was paid £651,488 last year.

HS2 maintains that high salaries are justified by the need to “employ the right level of expertise”. But the failure of corporate governance were underscored two years ago when the company made £1.8m in redundancy payments that had not been authorised by the Department for Transport. 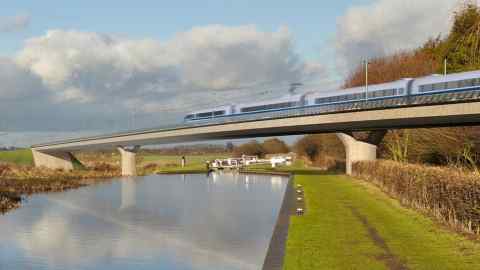 There have also been conflict of interest scandals at the company. In 2017 engineering group CH2M — now Jacobs — handed back a £170m contract to design the second phase of HS2 after Mace, a losing rival in the tender, threatened legal action. Mace pointed out that Mr Thurston was a former CH2M employee — as was his predecessor, Roy Hill, who had filled the role on a temporary basis.

Several former contractors and employees allege that HS2 has a culture of secrecy driven by the need to get approval for the project at any cost. More than 300 contractors, consultants and local authorities involved in the project have signed non-disclosure agreements, according to a freedom of information request by New Civil Engineer.

One contractor concluded: “There needs to be more public assessment and there has been none.”