Renault is considering introducing a battery-swapping capability in its electric cars, potentially becoming the first big carmaker to embrace the technology.

Chief executive Luca de Meo told the Financial Times’ Future of the Car Summit on Tuesday he is assessing plans to adopt the technology, which would significantly cut waiting times at recharging stations.

The technology allows a driver to replace spent batteries with recharged ones within minutes at dedicated stations, resurrecting an idea first introduced by the French carmaker more than a decade ago.

“I’ve asked our engineers to find the solution to go back to the original idea that was pioneered by Renault around 2010/11 and maybe we’ll see the thing coming on some of the cars.

“It’s not decided, but I see it as an interesting opportunity. We need to find a pragmatic solution, but from a business point of view, there’s a point separating the battery from the car.”

De Meo, who opened the three-day FT virtual event where Stellantis chief executive Carlos Tavares and Jaguar Land Rover boss Thierry Bolloré are due to speak on Wednesday, also said Renault was on track to hit its 2022 cost-cutting targets later this year.

The battery-swapping technology also allows manufacturers to decouple the cost of batteries from new electric vehicles, preventing drivers from being concerned about depreciating battery capacity or value.

While none of the largest carmakers have adopted the technology, there are signs the system could work.

Chinese electric vehicle start-up Nio is at present the industry leader, having carried out more than 1m swaps so far since launching its service.

The brand plans to double its Chinese network to more than 500 sites in 2021, and also wants to open a swapping station in Norway later this year to spearhead its foray into the European market. 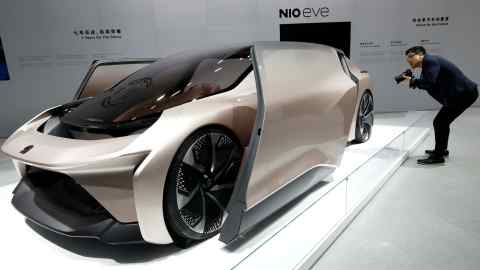 De Meo said there was “potential upside” in finding a solution to the safety issues that arose from separating the high-voltage battery from the car that would pave the way for a battery-swapping service.

Renault, which was one of the earliest brands to launch an electric vehicle with the battery-powered Zoe, is on a drive to increase electric vehicle sales and to strengthen the business by cutting factory space and overhauling its stable of brands.

De Meo, a former Audi executive, told the FT summit that the group’s Alpine brand would become an all-electric marque that was “a mix between a mini-Ferrari and a mini-Tesla”, although he does not plan to widen the nameplate to become a premium brand with a full suite of vehicle types.

“I know how difficult it is to create from scratch a premium brand because it’s not only about doing good cars, it’s about everything: technology, distribution, our reputation and the different segments,” he told the digital summit.

The group would also focus its first electric vehicle production efforts in France, with hybrid models made elsewhere, he added.

Renault’s home nation would become “an ecosystem that is more centred on electric vehicles”, he said. “France is a particularly attractive place especially to produce electric vehicles because we have competence, so I don’t have to reproduce stuff to produce an electric engine.”

Get alerts on Renault SA when a new story is published