China and Huawei propose reinvention of the internet

China has suggested a radical change to the way the internet works to the UN, in a proposal that claims to enable cutting-edge technologies such as holograms and self-driving cars but which critics say will also bake authoritarianism into the architecture underpinning the web.

The proposal has caused concerns among western countries including the UK, Sweden and the US, who believe the system would splinter the global internet and give state-run internet service providers granular control over citizens’ internet use. It has gained the support of Russia, and potentially Saudi Arabia, according to western representatives at the ITU.

“Below the surface, there is a huge battle going on over what the internet will look like,” said a UK delegate to the ITU, who asked not to be named.

“You’ve got these two competing visions: one which is very free and open and . . . government hands-off . . . and one which is much more controlled and regulated by governments.”

Huawei has said that parts of the technology for the new network architecture are already being built, with the help of multiple states and companies, but would not name those involved. It has also said elements will be ready to be tested by early 2021.

In a PowerPoint presentation and an official standard proposal obtained by the Financial Times, Huawei describes the existing internet infrastructure that underpins global networks — known as TCP/IP — as “unstable” and “vastly insufficient” to meet the requirements of the digital world by 2030, including self-driving cars, the ubiquitous internet of things and “holo-sense teleportation”.

Instead, the Chinese proposals suggest the ITU take a “long-term view” and “shoulder the responsibility of a top-down design for the future network”.

Huawei said that New IP is being developed purely to meet the technical requirements of a rapidly-evolving digital world and that it has not built any type of control into its design. It said it was leading a group at the ITU focused on future network technology. “The research and innovation of New IP is open to scientists and engineers worldwide to participate in and contribute to,” added a spokesperson.

FT Magazine
The battle to control the internet 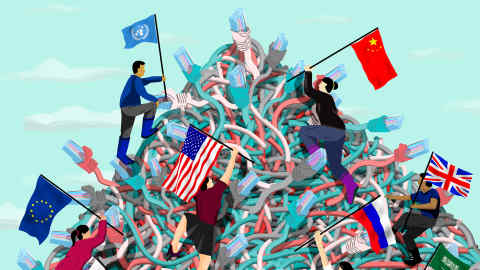 The ITU is currently led by Chinese telecoms engineer Houlin Zhao, who was nominated to the position by China’s MIIT in 2014.

But a forthcoming paper for Nato by Oxford Information Labs, a cyber security company, whose authors are also UK delegates to the ITU, warns that New IP will enable “fine-grained controls in the foundations of the network” and that the Chinese approach “will lead to more centralised, top-down control of the internet and potentially even its users, with implications on security and human rights”.

Standards ratified in the ITU, which comprises nearly 200 member states, are commonly adopted by developing nations in Africa, the Middle East and Asia, where the Chinese government has agreed to supply infrastructure and surveillance tech under its “Belt and Road Initiative”, according to experts.

Huawei and other co-developers are planning to push through the standardisation of New IP at a major ITU telecommunication conference in India in November.