Investors brace for test of nerves as inflation worries mount

For too long, more than a year, managing money has been relatively plain sailing, with stocks rising higher. This is instilling an anxious sense that something has to go wrong, and putting pressure on some of the stock markets’ frothier elements.

Earlier this month, Janet Yellen was responsible for flicking away a little of that froth. At an event hosted by the Atlantic magazine, the former Federal Reserve chair, now US Treasury Secretary, uttered words that struck fear in the hearts of some market participants: “It may be that interest rates will have to rise somewhat to make sure our economy doesn’t overheat.”

It is almost comical that this should cause any market reaction at all. The Fed slashed rates to zero and turned on the stimulus hose in the teeth of the coronavirus crisis last year. Now, happily, vaccination rates in the US are high and infection rates are falling. Business is getting back to normal, quickly. Quickly enough, in fact, to cause bottlenecks and supply problems in everything from lumber to labour.

It does not take a rocket scientist to see how this might pan out. Making predictions is foolish, but I am prepared to stick my neck out here: the next move in US interest rates will be higher, not lower.

And yet: bring out the smelling salts. After Yellen’s comments, some of the technology stocks that have sparkled over the past 12 months swooned, and the Nasdaq Composite ended the day down by nearly 2 per cent. Yellen herself quickly clarified her remarks. She was not “predicting or recommending” a rise in rates, which is no longer in her domain anyway.

Some analysts described the Treasury secretary’s words as a volatility-stoking mis-step. Cooler heads saw it as a statement of the obvious. The market reaction just underscores how thin-skinned some investors have become and how carefully monetary and fiscal policymakers need to choose their words.

“Markets seem determined to live in the past,” wrote Paul Donovan, chief economist at UBS Wealth Management. “Consumer price inflation in every economy is telling us about the oil price a year ago. This is not a concern, but markets want to worry about something.”

Market movements this week again suggested that urge to fret is strong. On Tuesday, high-growth tech stocks dropped in anticipation that Wednesday’s US inflation reading would be high. On Wednesday, they dropped again when inflation was indeed shown to be running hot.

The latest assessment of US consumer prices showed a 4.2 per cent ascent in April from a year ago — the chunkiest reading since September 2008. Some of the details were even more striking; prices for used cars and trucks jumped 10 per cent in April alone, accounting for a large slice of the gains in the overall index.

Again, though, none of this should be a huge surprise.

“It looks like Wall Street is climbing the wall of worry,” said Gregory Perdon, co-chief investment officer at private bank Arbuthnot Latham. “The bears are constantly looking for signs that the world is going to end. They come up with all the potential excuses. The reality is that the only question that matters is whether the reopening is going OK or not. And it’s going OK. And Europe is pulling it together.”

The reasonable assumption always runs that the Fed likes delivering unexpected stimulus. It does not like shocking the system with unforeseen tightening measures that constrain financial conditions. So while the central bank has committed to keeping policy super accommodative even in the event of above-target inflation, some rate setters have started mentally preparing the market for an eventual return to normal. The past few days and weeks show that investors are going to have to learn to live with this.

The volatility is centred in whizz-bang tech stocks, which feels like the right place. This is bad news if you are, for example, Ark’s Cathie Wood. Her flagship Innovation fund tracking technology stocks has dropped by more than one-third from its peak in February. 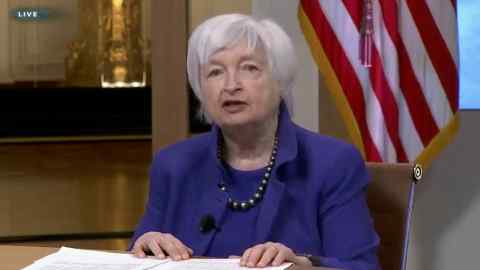 Stocks closely tied to bitcoin and to newly-listed US companies are also suffering a rough run. This is all a catch-up with the bond market shock of the first quarter. Fixed income specialists, a dour bunch at the best of times, moved to price in a pick-up in inflation earlier in the year. Notably, while 10-year US yields did rise on Wednesday after the inflation data release, they did not hit new highs.

Investors in companies that are not yet turning a profit are on shaky ground after a spectacular run. For everyone else, aside from those who truly believe the inflation pick-up will get out of hand, now is the time to brace for frequent tests of nerve.

Get alerts on US Inflation when a new story is published