The ESG spotlight has turned to how companies treat their employees, customers and suppliers

As the coronavirus pandemic escalated in March, two British companies landed in the spotlight over their treatment of employees and customers.

Mike Ashley’s Frasers Group was targeted on social media after attempting to keep open its Sports Direct outlets despite a government order to shut all non-essential shops, as well as raising prices on some sporting equipment. Pub chain Wetherspoon suffered a backlash too, including graffiti sprawled on one of its London premises, after suggesting staff should not be paid after its pubs closed and that its workers should move to supermarkets.

Shareholders in the companies also snapped to attention. “I was very taken aback,” says one senior figure at a UK asset manager. “That [behaviour] may damage their business in the long term.”

The Covid-19 epidemic has shifted investor focus on how companies treat their employees, customers and suppliers like never before. In recent years, asset managers have piled resources into developing their environmental, social and governance credentials, arguing these issues have a material impact on investment performance.

However, social factors — which range from employee rights to treating suppliers fairly — have been overshadowed by environmental and governance issues. Investors have emphasised governance worries, such as around board composition, for years, while environmental concerns climbed up the agenda after the 2015 Paris agreement to tackle climate change.

“Now the ‘S’ [in ESG] is coming to the fore,” says Sébastien Thevoux-Chabuel, a portfolio manager at Comgest, the French asset manager.

Colin Baines, investment engagement manager at Friends Provident Foundation, a UK non-profit that recently ran a so-called ESG Olympics to find an asset manager that took sustainability seriously, says the S has definitely been “the poor relation” of environmental and governance issues. “There has been real resistance from some asset managers to taking meaningful action. However, I would expect it to rocket up the agenda as a result of the current crisis,” he adds.

Big investors are also aware that many companies are in a fight for survival and huge job cuts are inevitable. But those that are battling through by stripping costs to the bone need to make sure that workforces are not saddled with too much of the burden, especially when businesses are receiving government handouts and senior managers continue to enjoy high pay.

In March, more than 280 investors, with $8.2tn in assets under management, called on companies to protect their workforces and their communities during the crisis, including offering paid leave, putting additional health and safety measures in place and maintaining supplier relationships.

“Workers must be protected during the Covid-19 pandemic and its aftermath,” said New York City Comptroller Scott Stringer. “As shareholders, we expect companies to protect the health, safety and economic stability of their workers. The long-term success of companies depends on the long-term success of employees, and this call to action is not just the right thing to do, but the smart thing to do.”

Attention on treating stakeholders fairly has become more prominent over the past year. Last August, the Business Roundtable, a US trade body, dropped the “shareholder primacy” creed that had driven US capitalism for decades and instead urged companies to consider the environment and workers’ wellbeing alongside their pursuit of profits.

The coronavirus outbreak marks the first big test businesses face when it comes to the idea of stakeholder capitalism. Government measures to tackle the pandemic have left whole sectors unable to operate, with many companies generating little or no revenue.

Investors such as Robeco and Impax Asset Management say they have long considered social issues as part of investment decisions. But other investors have found it challenging.

Neville White, head of responsible investment policy at EdenTree Investment Management, says: “The ‘S’ has troubled quite a few investors because it is quite hard to measure. Talking about human rights and labour rights can seem quite amorphous.”

One of the reasons for this is because of a dearth of available and comparable data. “On the social side, it has been quite difficult to get robust data on this. On the environmental side, there has been a big development in data [in recent years],” says Michael Lewis, head of ESG thematic research at DWS.

This has meant that some companies have been able to hide behind positive public declarations about how they value their employees, suppliers and communities. But such statements are now being put to the test as businesses have been forced to react to government-imposed measures to stop the spread of the virus.

Mr Lewis points to data from Just Capital, which ranks companies on the issues that Americans care about most, which found that just over half of the US’s largest employers were telling staff to work from home, while more than a third were offering paid sick leave.

“It is easy to make nice statements [about how you value stakeholders] during the good times,” says Mr Thevoux-Chabuel. “Just as Warren Buffett said: ‘it is when the tide is leaving that you know who was swimming naked’. And it is during these times you see which companies are living up to their words.”

The outbreak has also shifted attention to industries that have largely escaped attention over ESG issues in recent years. Mr Lewis points out that oil, gas, miners, utilities and carmakers have come under intense scrutiny because of their role in global warming, but the coronavirus pandemic means the services sector, financials and healthcare are now under the spotlight.

“We are becoming more knowledgeable about what companies are doing. This is changing a shift in our sector focus,” Mr Lewis says.

Masja Zandbergen, head of sustainability integration at Robeco, says it is clear that issues such as health and safety and flexible working are not just relevant for a small number of sectors.

“We really believe that companies and the response they have to the coronavirus crisis are a proxy for their response to human capital management,” she adds.

The new focus on social issues will result in changes to discussions between investors and boards, Mr Lewis predicts. When investors speak to directors about environmental issues, they often put a focus on tackling carbon emissions by changing their capital expenditure plans to become greener. Now, he says, the same will happen for social issues, with companies facing shareholder pressure to ensure employees have access to healthcare and paid leave and suppliers are treated fairly.

Mr Baines of Friends Provident Foundation, however, says investors will need to go beyond employee and supplier rights. “It also necessitates action on more uncomfortable issues such as aggressive tax avoidance and decent work more generally.” 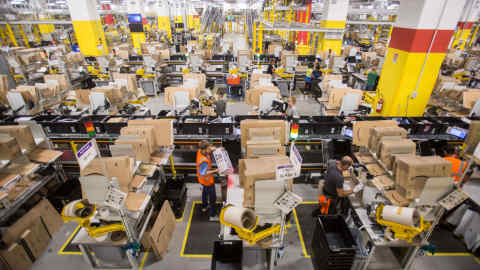 He adds: “Aggressive tax avoidance is a real blind spot in ESG . . . It is noteworthy that some of the companies named [in a tax transparency report by Principles for Responsible Investment] for failing to substantively respond to investors on the issue, such as Amazon and Alphabet, are also among the top holdings in many ESG funds. This would indicate a failure to meaningfully integrate the ‘S’ and must change.”

Amazon also faced criticism recently over its treatment of warehouse workers during the pandemic.

Mr Lewis agrees there will be challenges when it comes to how companies and investors grapple with social issues in the future. He says, for example, that while companies can step up when it comes to looking after their own employees, it is often more challenging to tackle supply chain issues in faraway countries. “The further companies go from their own sites, the oversight they have can be compromised. There are always hazards there.”

The devastating impact of coronavirus has already shifted conversations between investors, the public and companies. In April, Legal & General Investment Management, the UK’s largest asset manager, urged companies to treat staff and suppliers well, warning that those who failed to do so would be held to account.

EdenTree’s Mr White says the pandemic has changed how investors think about social issues and the way businesses view labour and human resources. The public, too, is having a rethink about the role of companies, as the events at Wetherspoons and Sports Direct revealed.

“The ‘S’ might become far more important because the relationship between governments, taxpayers, shareholders and companies is going to shift because of this,” says Mr White. “There will be an expectation from society that businesses behave differently.”