ECB divisions open up over pledge to persist with negative rates

The European Central Bank’s decision to become more tolerant of inflation before raising interest rates has been criticised by some of its more hawkish policymakers, an early indication of the divisions in its debate over when to scale back bond-buying.

After its latest policy-setting meeting on Thursday, the ECB said it would keep buying bonds and maintain its deeply negative interest rates in an attempt to shift the eurozone economy out of its persistent pattern of sluggish inflation. The bank added that it was prepared to tolerate a moderate and transitory overshoot of its price growth target.

The German and Belgian bank heads, who sit on the ECB’s 25-person governing council, objected to the wording of the stance, according to people familiar with the discussions.

Jens Weidmann, president of Germany’s Bundesbank, complained that the new conditions set by the ECB were too aggressive and increased the risk of inflation surging above its intended mark.

Klaas Knot, president of the Dutch central bank, called for the ECB to separate the timing of when it will stop buying bonds from its new rate guidance, those familiar with the discussions said. Another council member said the idea was dropped after policymakers decided to postpone a discussion of the asset purchase plans until autumn.

Speaking in a press conference after the meeting, Christine Lagarde, ECB president, said there had been “minor divergence” on the guidance but it had still won the support of “an overwhelming majority”.

Some ECB rate-setters have called for a reduction of its €1.85tn programme of coronavirus pandemic-related bond purchases. But the central bank left its guidance on asset purchases unchanged and Lagarde said it was “totally premature” to discuss tapering them.

In its announcement of the policy decision, the ECB said its revised guidance would “underline its commitment to maintaining a persistently accommodative monetary policy stance to meet its inflation target”.

The German and Dutch central banks declined to comment and the Belgian central bank could not be reached.

Investors said the guidance, published two weeks after the ECB unveiled a new strategy that increased its official inflation target to 2 per cent, made it more likely to keep its ultra-loose policy in place for longer.

Martin Wolburg, senior economist at Generali Investments, said the ECB’s shift meant there was “now leeway for it to push the first rate rise beyond 2024”, which would be a decade after it first cut rates below zero.

Eurozone government bond yields fell slightly following the announcement before retrenching. Germany’s 10-year yield was 0.04 percentage points lower at minus 0.43 per cent, while Italy’s 10-year yield fell a similar amount to 0.64 per cent. Bond yields fall as their prices rise. The euro dipped against the US dollar, hitting a three-month low of $1.1762. 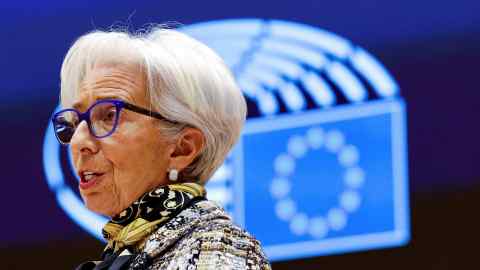 Elga Bartsch, head of macro research at the BlackRock Investment Institute, said the ECB had delivered “a dovish surprise” that was likely to be followed by “an upward adjustment” of its asset purchase plans later this year.

Lagarde said there was still “some way to go before the fallout from the pandemic on inflation is eliminated”, suggesting the ECB was unlikely to taper its bond-buying soon. But she denied the new wording implied low rates for longer, saying it would help the eurozone economy hit its target.

The medium-term outlook for eurozone inflation was “subdued” despite expectations for “strong growth” in the third quarter, she said, adding that the spread of the Delta variant was “a growing source of uncertainty”.

The ECB said it was prepared to tolerate a moderate and transitory overshoot of its inflation target as a “persistent” policy was necessary when rates were close to the lowest point at which cuts were effective — as they are now.

The ECB added: “This may also imply a transitory period in which inflation is moderately above target.”

Although inflation rose to 1.9 per cent in June, most investors remain sceptical about the likelihood that the bank will meet its new goal.

“This was a bit like old wine in a new bottle; the communication has changed somewhat but in terms of substance the ECB remains very dovish, putting a cap on any tapering speculations,” said Carsten Brzeski, head of macro research at ING.

Some of the world’s other big central banks, such as those of Canada and Australia, have decided to slow the pace of their Covid-related stimulus programmes. Others such as the US Federal Reserve are still debating when to wind down.