Water shortages in May have intensified over past 3 years, US Drought Monitor reports

The US west coast state of California is moving into a summer drought that threatens to spark another season of wildfires, as climate change pushes up seasonal temperatures across the nation.

California governor Gavin Newsom, this week extended a drought emergency notice originally declared in April to cover an area representing about a third of the state’s population, as conditions have worsened.

The state experienced its sixth warmest April on record this year, according to the US Drought Monitor, with water scarcity expected to continue over the summer.

Water shortages during the month of May have become increasingly extreme in California over the past three years, the US Drought Monitor found.

“This is going to be an incredibly bad drought year in California, and likely will be the single worst drought year across the broader western US since 2002,” said Ben Cook, research scientist at the Lamont-Doherty Earth Observatory at Columbia University.

“The fire season is already off to a bad start compared to last year and we expect this elevated fire risk to continue at least through the fall,” he said.

Temperatures across much of the US have increased over the past 30 years, rising by about 0.55C or more in many areas, compared with the average for the 20th century, according to the latest version of long-term climate data released every 10 years by the US National Oceanic and Atmospheric Administration.

The data, the latest of which covered the period 1991 to 2020, indicates that much of the US has experienced temperatures rising progressively higher than the average for the 20th century — with the latest 30 years showing the most extreme warming of all since the first set of records in the series, which spanned the years 1901 to 1930.

“The influence of long-term global warming is obvious,” said the NOAA.

Average rainfall during the past 30 years also decreased in parts of the west of the country while increasing elsewhere, NOAA found.

At least some of that wetness, relative to the 20th century average, is linked to overall climate warming and “wetting” of the atmosphere that occurs as rising temperatures cause more water to evaporate from the ocean and land surface.

In California, dry soils and a warmer than average spring this year caused an “historic and unanticipated” reduction in the volume of water flowing into the state’s major reservoirs, several of which were “extremely low,” Newsom’s office warned this week. 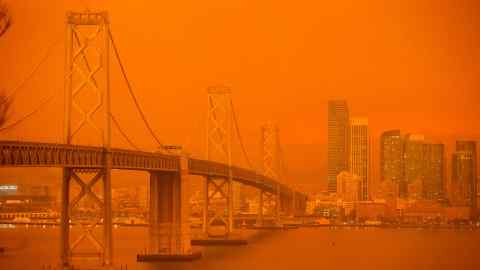 Water stored in mountain snowpacks usually runs downstream into rivers and reservoirs as the snow melts. But much of the snowpack that had melted had seeped into “very dry ground” rather than making its way into watercourses, Newsom’s office said.

Droughts and wildfires threaten the state’s agricultural industry — particularly water-intensive crops, such as almonds — as well as its citizens, infrastructure and natural environment.

Since the 1960s, California’s rainy season has become “shorter and sharper”, with delays of about a month likely to exacerbate droughts and prolong the wildfire season, found a study published this year in the journal Geophysical Research Letters.