Malvika Neeraj, a 29-year-old doctor at a government-run hospital in south Mumbai, spends much of her day turning away patients.

With coronavirus spreading through India’s financial capital, her 400-bed hospital has been operating at below half its capacity because there are not enough doctors and nurses.

“The biggest part of my job is telling people, ‘we don’t have enough beds. I’m really sorry because you need to go somewhere else’,” said Dr Neeraj, whose salary has been repeatedly delayed during the crisis. “It hurts.”

A number of her colleagues became sick with Covid-19, and Dr Neeraj noticed that she had a persistent headache. “I never paid attention to it,” she said. “I thought it was because of a lack of sleep or something like that.”

But on Friday, a test confirmed that she too had contracted the virus, she said. Dr Neeraj, who said she was experiencing only mild symptoms, is herself confined to a hospital ward for health workers. “This is part of the job,” she added.

Mumbai, with a population of about 20m, has emerged as the country’s coronavirus hotspot with more than 18,000 cases, a fifth of all confirmed infections.

Even as India prepares to ease its lockdown, the national caseload is rising fast and hospitals in Mumbai have faced a surge in suspected Covid-19 patients. Doctors said it risked overwhelming India’s health infrastructure that had been crippled by decades of under-investment.

India spends only about 1 per cent of its gross domestic product on healthcare, one of the lowest levels in the world. There is also a chronic shortage of doctors and the country does not fare well on important health metrics such as maternal and infant mortality.

India’s coronavirus infection and death tolls still lag well behind the US or in western Europe, though at more than 90,000 confirmed cases it has overtaken China. The curve of new infections has also not flattened despite nearly two months of nationwide lockdown.

India’s healthcare capability varies greatly from state to state. The southern state of Kerala has been praised for its early success in limiting the number of infections to about 500, despite being the first hit.

Maharashtra, Mumbai’s state, also has one of the country’s better-equipped healthcare systems. Yet the percentage of positive test results there continues to rise.

In cities such as Mumbai, crowded living conditions, shoddy infrastructure and poverty have complicated efforts to contain the disease. Some 40 per cent of the population live in slums. Dharavi, the city’s largest with 800,000 residents, has suffered a particularly alarming outbreak.

One doctor said that more than half of his government hospital’s ventilators were still waiting to be repaired because, like many doctors, maintenance contractors had not been paid.

Mobile phone videos taken in Mumbai hospitals have shown dead bodies in wards and patients being forced to share beds. While the footage sparked public outrage and political recrimination, doctors said it reflected how the virus had led to bleak conditions in some government hospitals.

“In the end [doctors] are under immense mental as well as physical stress,” said Rushabh Chheda, a neurosurgeon working at Sion Hospital, where one of the videos was filmed.

“It’s not a pleasant sight when you enter a ward and you see patients gasping for air and falling dead, and still they’re giving their best.” 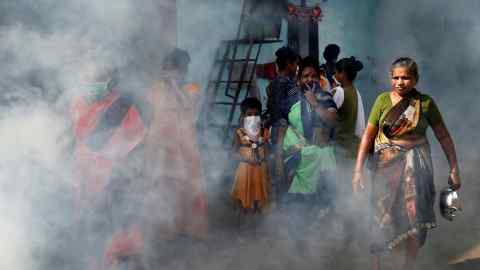 Local authorities did not respond to a request for comment.

As officials across the country begin reopening their cities, doctors fear Mumbai’s monsoon season will exacerbate the crisis. The start of the rains around June leads to outbreaks of diseases such as dengue and malaria, which result in waves of patients arriving at hospitals. That annual cycle would bring an added set of challenges this summer, they said.

“In non-Covid times, our healthcare infrastructure is usually compromised in terms of its ability to deliver care,” said Sanjay Nagral, a surgeon who works at both a private and government hospital in Mumbai.

“In a pandemic situation that was obviously going to be a huge challenge, and that’s exactly, unfortunately, what has happened.”