If you think the same, join us
Donald Trump

Courtney Weaver in Washington and Robert Armstrong in New York

A US judge has refused to block House Democrats from subpoenaing Donald Trump’s financial records from his accounting firm, rejecting the president’s arguments that congressional investigators were overstepping their authority.

The House of Representatives oversight committee issued a subpoena to the accounting firm, Mazars USA, after Michael Cohen, the president’s former personal lawyer, told Congress that Mr Trump routinely inflated or underestimated his assets for his financial benefit.

Amit Mehta, a US district judge, said on Monday he would not intervene on behalf of Mr Trump or his business to block the subpoena issued to the accounting firm, while giving Mr Trump’s lawyers a week to appeal against the decision.

“According to the oversight committee, it believes that the requested records will aid its consideration of strengthening ethics and disclosure laws, as well as amending the penalties for violating such laws,” said Mr Mehta. “These are facially valid legislative purposes, and it is not for the court to question whether the committee’s actions are truly motivated by political considerations.”

The judge said the subpoena would also allow Congress to verify that Mr Trump had not violated the foreign emoluments clause of the US constitution, which prevents US officials from accepting financial benefits from foreign governments.

Speaking outside the White House, Mr Trump said: “It’s totally the wrong decision by, obviously, an Obama-appointed judge.” Lawyers for the president filed a formal notice of appeal on Tuesday.

Separately, the House ways and means committee is fighting to subpoena Mr Trump’s tax returns. In that case, the president and his lawyers have also sought to fight back using claims of congressional over-reach.

Earlier on Monday, Mr Trump took to Twitter to defend his relationship with Deutsche Bank after a New York Times report that said in 2016 and 2017 a bank employee flagged as potentially suspicious a series of transactions involving entities controlled by the president and by his son-in-law Jared Kushner.

“I built a great business and don’t need banks, but if I did they would be there,” the president said. “Deutsche Bank . . . was very good and highly professional to deal with — and if for any reason I didn’t like them, I would have gone elsewhere . . . there was always plenty of money around and banks to choose from.”

Deutsche, according to the report, declined to pass information on to justice department regulators. The employee, Tammy McFadden, was subsequently sacked and has lodged complaints with the Securities and Exchange Commission

The German bank has denied that Ms McFadden’s concerns were ignored or that she was fired because she made trouble for a big client. “At no time was an investigator prevented from escalating activity identified as potentially suspicious,” it said in a statement. “Furthermore, the suggestion that anyone was reassigned or fired in an effort to quash concerns relating to any client is categorically false.”

Deutsche said it had “increased our anti-financial crime staff and enhanced our controls in recent years”, adding that it took compliance with anti-money laundering laws “very seriously”. 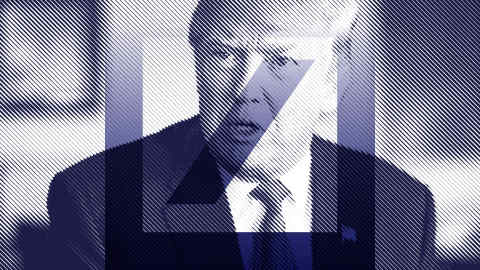 Deutsche has been fined by both US and European regulators in recent years for violating anti-money laundering regulations and sanctions rules, and remains under investigation by several authorities over allegations of similar breaches.

The bank’s links to Mr Trump are sensitive because of political interest in the US president’s financial history and the German bank’s repeated run-ins with regulators in the US, where it has regularly failed Federal Reserve stress tests.

Last month, Mr Trump sued Deutsche to stop it from handing over financial records in response to congressional subpoenas issued by Democrats asking for documents on its business relationship to the Trump Organization.

Mr Trump has been a Deutsche client since the mid-1990s, and he owed the bank $300m at the time of his inauguration.

The relationship has not always been smooth. In 2008, Mr Trump sued the bank, and was sued in return, over $40m in personal guarantees he made on a loan funding the construction of the Trump International Hotel & Tower in downtown Chicago.

He said the failure of Lehman Brothers was an unforeseeable event that should have freed him from his obligations. Deutsche has also financed projects for Mr Trump in Miami and Washington.