France was the first country to give employees the right to digitally disconnect from work. Now the idea is being taken up across Europe

In the latest series of Netflix hit Emily in Paris, its young American heroine is scolded for her work-all-hours attitude and inability to disconnect.

“You know, we’re not allowed to take work calls on weekends,” one of her French colleagues says when she interrupts his chess match to talk about her latest marketing strategy.

But no such ban actually exists in France. The country’s pioneering attempt in 2017 to enshrine a “right to disconnect” has so far had a limited impact, with the pandemic even raising expectations that employees should be “always on”.

There are no hard and fast rules on how employers should implement the guidelines and out-of-hours work is still habitual in many companies, especially those that lack a strong union presence, or in some high-pressure sectors such as finance. Companies with fewer than 50 employees are let off the hook.

According to a survey by the consultancy Empreinte Humaine, French workers’ stress levels have shot up since the pandemic, with about a third of salaried staff developing signs of burnout, three times more than before the crisis. The rules also fail to address the possible stigma attached to employees who invoke their right to switch off, and the negative effect this might have on their career. 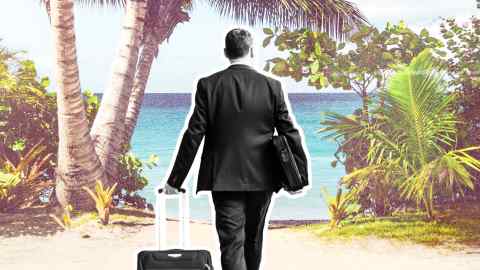 However, France’s lead on trying to enshrine these principles is being cast in a new light as other countries have implemented similar disconnection rights. Italy and Spain followed, in 2017 and 2018 respectively, with their own regulations around a right to disconnect and flexible work. Last year, Portugal introduced a law that forbids companies from contacting employees outside working hours and this year Belgium extended this right to its civil servants. Meanwhile, the EU is drafting a directive aimed at protecting people from work-related digital overload.

“At the time there was a lot of humour . . . [about] the idea that only the French could imagine this,” says Bruno Mettling, the former head of human resources at telecoms group Orange, who helped shape the 2017 law.

France is known, for instance, for its 35-hour-week, protected by law, although in practice many employees, including knowledge workers, work longer hours, and accrue overtime.

“The issues around disconnecting are really coming into focus in Europe, especially since the Covid-19 crisis and the rollout of homeworking,” Mettling says.

In France, the right to disconnect means an employee cannot be found at fault for not having been connected out of hours, giving them some legal protection. And workers have brought some legal cases to argue for their out-of-hours work to be recognised, either through extra pay or time off.

“It has at least reinforced the position of an employee who refused to respond . . . it’s about an awareness of a reasonable use of connectivity,” says Mettling, who now runs Topics, a consultancy which advises companies on workplace issues such as talent management and cultural change.

Under the law, companies cannot refuse to implement charters or other guidelines around disconnecting if asked to do so by staff and unions, and hundreds of agreements of this type have been struck since 2017.

At the time there was a lot of humour . . . [about] the idea that only the French could imagine this

But most include enough flexibility to allow for cases when employees do need to be connected for specific projects or urgent matters, and they put the onus on employees to remember to disconnect. There are no sanctions for companies that do not pursue these kinds of initiatives.

However, buy-in among senior managers and executives on the right to disconnect has increased.

“It used to not even be really present in people’s minds,” says Jean-Luc Molins, national secretary of the engineers and senior manager branch of the CGT union, who was also involved in helping to shape the French law. “Managers didn’t understand the question. When we would say ‘right to disconnect’, they didn’t understand exactly what you were talking about.”

Molins highlights that the number of managers who think the right to disconnect is a good idea has risen to 69 per cent, from 60 per cent pre-pandemic, according to surveys commissioned by the union.

Despite the law, Molins says the situation since the pandemic has actually worsened, adding that three out of four workers in France at a manager level “are connected for professional reasons in their rest time”, its polling showed.

Some companies were aware before the pandemic of their employees feeling unable to switch off and tried to come up with imaginative solutions to help them manage the tyranny of technology, particularly emails.

German truck and carmaker Daimler brought in a system in 2014 allowing workers in its home market to set their emails to “auto-delete” when on holiday, triggering an automatic warning to senders and giving them a forwarding address.

In France, the local arm of German insurer Allianz had tried to promote a “good behaviour” charter well before the right to disconnect law came in. The pandemic has prompted the group to rethink the rules again.

“When we moved into a hybrid model, with homeworking and lockdowns, we had some co-workers raising the alarm, saying, ‘I can’t seem to be able to stop [working]’,” says Cécile Deman-Enel, a human resources specialist at Allianz. Now it encourages employees to schedule meetings at acceptable times within the working day — so not over lunch hours, for example.

As the pandemic accelerated the number of people working more flexibly from home, and exposed the limited impact of legislation in solving the problem of work intruding on personal time, Mettling says that beyond a right to switch off, employers now need to work on promoting a duty to disconnect. This means helping workers learn how to set boundaries through training and awareness campaigns.

“It’s when you’re tempted to send an email because you finally have five minutes over the weekend to answer something you got on Friday,” he says. “You need an alarm bell to go off in your head saying, ‘you’re only going to bother your colleague, it can wait’.”

Back on Netflix, Emily learns that lesson eventually, in her own way — at one point putting off her next Instagram post to enjoy the moment on a luxury yacht in the south of France.