The G7 advanced economies have struck what they have termed a “historic agreement” on taxing multinationals in a bid to create unstoppable momentum for a global deal.

A communique issued on Saturday showed that the US, Japan, Germany, France, UK, Italy and Canada had found enough compromise both to stop companies shifting profits to low tax jurisdictions and ensure the largest multinationals pay more tax where they operate.

The deal was hailed by finance ministers and marks a significant step forward in negotiations that started in 2013.

Rishi Sunak, UK chancellor, welcomed the deal as chair of the group this year. “My finance counterparts and I have come to a historic agreement on global tax reform requiring the largest multinational tech giants to pay their fair share of tax in the UK”, he said.

The UK priority in the talks has been raising more revenue from companies such as Apple, Google and Facebook.

Sunak’s enthusiasm was shared by other G7 finance ministers.

Janet Yellen, US treasury secretary, said the agreement was a “significant, unprecedented commitment” to a global minimum corporate tax of at least 15 per cent, which will increase corporate tax revenues significantly in the US. It would “ensure fairness for the middle class and working people in the US and around the world,” she said.

We want the international tax reform process to succeed and recognise this could mean Facebook paying more tax, and in different places

Olaf Scholz, the German finance minister, said the deal was “very good news for tax justice and solidarity and bad news for tax havens throughout the world”.

Bruno Le Maire, his French counterpart, said the G7 countries had, “risen to the challenge of this historical moment” saying the deal paved the way for a global accord at the G20 in Venice in July.

Italy’s prime minister Mario Draghi called it a “historic step towards a fairer and more equitable society for our citizens”.

The detail of the first part of the agreement, a significant US concession by the Biden administration, made it clear that “the largest global companies” with profit margins of at least 10 per cent would, in future have to allocate 20 per cent of their global profits to countries where they make their sales.

If implemented this would overturn a century of international corporate taxation, where profits are taxed only where companies have a physical presence.

Google, Amazon and Facebook all said they welcomed the G7’s move. “We want the international tax reform process to succeed and recognise this could mean Facebook paying more tax, and in different places,” said Nick Clegg, vice-president for global affairs at Facebook. 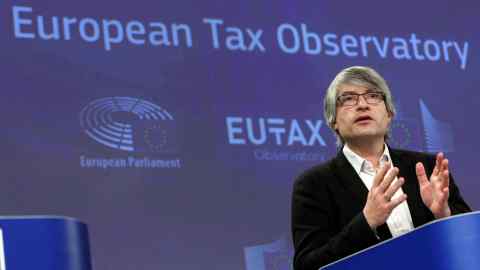 The definition of the largest global companies is still to be ironed out. This part of the deal will require a global accord later this year.

In return for this concession, the US has gained agreement from the rest of the G7 for each country to impose a minimum global corporate tax rate of at least 15 per cent.

This will reduce the incentive for large companies to declare profits in tax havens or low tax jurisdictions such as Ireland because the country in which the company is headquartered will be able to top up corporate tax payments to the global minimum effective level.

The US is expected to be the largest beneficiary of this second pillar of the deal.

There was haggling through Friday night over whether the agreement would set the global minimum at 15 per cent or “at least” 15 per cent, with France, among others, calling for the potentially higher rate in a bid to collect more revenues from its largest companies.

One of the most contentious issues had been a US demand for France, the UK and Italy to drop their new digital taxes in return for gaining taxing rights in this deal. Janet Yellen, US treasury secretary, had wanted this to be immediate, while the European countries insisted they would abolish these taxes once any global agreement had been sealed and ratified.

The communique showed that this part of the deal was still to be tied down with specific commitments. “We will provide for appropriate co-ordination between the application of the new international tax rules and the removal of all Digital Services Taxes, and other relevant similar measures, on all companies,” it said.

They said they backed the development of a consistent reporting standard based on the Task Force on Climate-related Financial Disclosures, a reporting framework that will become mandatory for some UK companies next year. 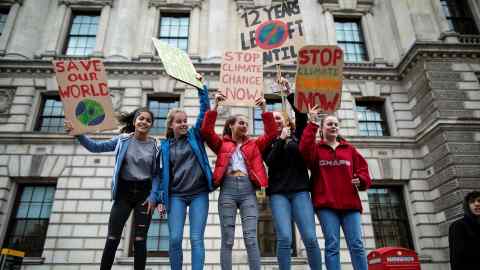 On Friday, European Central Bank president Christine Lagarde noted that the TCFD, which has been spearheaded by former Bank of England governor Mark Carney, was “a private sector initiative in the main, with voluntary observance”.

She urged policymakers to set clear rules about which companies should disclose their climate related risks, and how.

G7 finance ministers also committed to increasing their climate finance contributions through to 2025, though they did not specify by how much.

Get alerts on International tax when a new story is published