Jamie Dimon has thrown his weight behind Donald Trump’s move to relax financial regulations, saying that the slew of new rules put in place since the crisis has essentially “solved” the problem of banks being “too big to fail”.

In his annual letter to shareholders, the chairman and chief executive of JPMorgan Chase argued that the big US banks have “dramatically” boosted capital, liquidity and risk controls in recent years, while taking a series of steps to ensure they could be safely wound down without burdening the taxpayer.

As a result, he wrote, it was time to take a good look at ways to alleviate the regulatory burden on the big banks, which have been labouring under a regime which “is unnecessarily complex, costly and sometimes confusing”.

Dodd-Frank and other laws should not be thrown out entirely, Mr Dimon wrote, but it was “appropriate to open up the rule book in the light of day” and “rework” parts of it that did not work as well as they could.

“Regulations must be flexible enough to allow banks to act as a bulwark against [market panics], rather than forcing financial institutions into a defensive crouch that will only make things worse,” he said.

The remarks are in tune with the new Republican administration, which has promised to make life a little easier for the big US banks by reviewing the thicket of rules and regulations that were put in place under President Barack Obama.

Shares in JPMorgan, the biggest US bank by assets, and its cohort have rallied strongly since Mr Trump was elected in November, boosted by talk of higher interest rates and lower taxes, in addition to more relaxed supervision.

In one of his first acts after moving into the White House in January, Mr Trump ordered financial regulatory agencies to report back within a few months on measures to lighten the regulatory load — a pledge the president echoed on Tuesday, at a gathering of chief executives in Washington, by promising “a major haircut” on regulation.

Mr Dimon has long been the most outspoken of the big bank chiefs, often using his shareholder letter as a way of challenging the regulatory architecture put in place since the 2008 crisis.

In the weeks after the presidential election, Mr Dimon was approached by members of Mr Trump’s transition team to serve as Treasury secretary but declined, saying he was unsuited to the role, according to people familiar with the discussions. 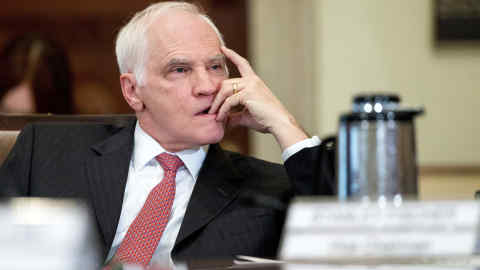 In December Mr Dimon was named chairman of the Business Roundtable, a group of almost 200 CEOs, which is among the most prominent lobbying groups in Washington. Mr Dimon, chief executive of JPMorgan for the past 11 years and chairman for 10, is also a member of Mr Trump’s strategic and policy forum.

In his letter last year, Mr Dimon mounted a robust defence of the biggest US banks, saying attempts to undermine them could cost America its global leadership in financial services — most likely to China.

Despite what Mr Dimon described on Tuesday as “extraordinarily difficult legal, regulatory and political environments” since the crisis, JPMorgan has delivered record profits in six of the past seven years.

JPMorgan is due to open US banks’ first-quarter reporting season on April 13.