The UK government should proceed with the full High Speed 2 rail line from London to Leeds and Manchester despite the potential for further cost increases, according to an early draft of the official review into the controversial project.

Douglas Oakervee, who was commissioned by Prime Minister Boris Johnson to assess the project, known as HS2, has suggested that cost savings could be found by cutting the number of trains per hour from a maximum of 18 to 14.

But Mr Oakervee has rejected the idea of cutting back the eastern leg of the £88bn project’s second phase, from Birmingham to Leeds, which was discussed by the 10-person panel advising the review.

The former chair of HS2 has also ruled out the idea of ending the line at Old Oak Common in west London instead of Euston in the heart of the capital, according to the leaked document in The Times. Instead he has suggested further stations, for example at Calvert in Buckinghamshire to connect with a new east-west line from Oxford to Cambridge.

The report suggests that the bill could be cut by £4bn by asking private developers to contribute towards the cost of building stations. The new stations will attract housing, offices and retail development.

Mr Oakervee appears to have ignored the question of whether speeds should be cut to save money, another idea discussed by the panel. Trains on the line will be able to run at up to 250mph although most would be likely to travel at 225mph.

The draft document was meant to be published in the autumn but was put off until after the general election, with its findings set to be handed to the transport secretary in the new government.

Department for Transport officials said Mr Oakervee had not finalised his report before the election was called. “No copy of this has been provided to the department,” said one. “He will deliver it to the new government, and any views ahead of that are speculation.”

The draft report broadly endorses the scheme, saying that its main purpose is to provide much-needed extra capacity on the railway system rather than high speeds.

The government was forced to announce this summer that the project was about £30bn over budget and that the second phase, beyond Birmingham, would come in up to seven years late, with a completion date of up to 2040. The first phase is now delayed by five years to 2031.

That prompted Mr Johnson to commission Mr Oakervee to conduct a review.

The Oakervee draft report suggests that HS2 has already spent about £9bn, of which up to £3bn in land and property costs could be recovered if the scheme was cancelled. The government’s net cost of cancellation would be £2.5bn to £3.6bn, it said.

It also said that the economic benefits of the scheme had dropped from £2.30 per £1 spent in 2017 to a much more modest £1.30. Finally the report suggests that HS2’s approach to procurement had “inflated prices” for the civil engineering works on phase one; it has urged a new approach to ensure that contracts are on “acceptable commercial terms”.

The only big loser from the draft review appears to be Staffordshire. The document suggests scrapping a connection to the West Coast main line which would allow compatible trains from the north to run through Stoke and Stafford and on to Birmingham and London, reducing journey times. Conservative-led Staffordshire county council had fought hard to get a junction at Handsacre included when the route was being finalised earlier this decade. 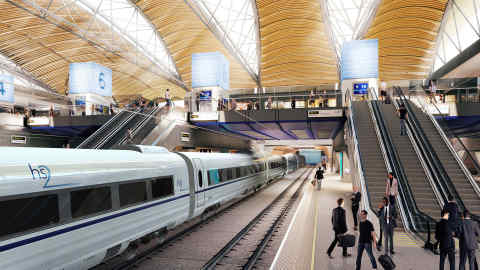 Politicians and business leaders in the Midlands have long argued that the economic impact of joining cities such as Nottingham, Leicester and Leeds with faster rail links has not been taken into account and will be pleased with the recommendation for a fresh assessment.

Henri Murison, director of the Northern Powerhouse Partnership, welcomed the leak, saying: “The Northern Powerhouse independent review on HS2 said that there were no identified credible alternatives to HS2 in order to deliver the same capacity, and that it has the potential to unlock greater growth in [the] North and Midlands. It is welcome that their recommendations are mirrored by the government’s own Oakervee Review.”

HS2 is one of the country’s most controversial infrastructure projects in recent history. It has been beset by delays, contract scandals and concerns over poor management, as well as allegations by whistleblowers that parliament was misled on its budget for land purchases.

Scores of people have also had property seized to make way for the line but have been paid late or are still waiting, in some cases threatening their livelihoods.

Earlier this year the House of Lords economic affairs committee called for the work on the line to be paused until the economic case for the project had been made, saying the costs were out of control.

Tony Berkeley, deputy chairman of the Oakervee review and a long-term critic of the project, said he could not “support its conclusions or recommendations” and had “serious problems with its lack of balance”.

In a letter to Mr Oakervee seen by the Financial Times, he accused the panel of failing to look at the pros and cons of alternative options and ignoring eviidence from the House of Lords committee.

Mr Berkeley also questioned whether HS2, the DfT and the Treasury were really “fit for purpose to take the project forward”, pointing out the massive increase in projected cost.