A holiday credit card trick that will save you money

Never opt to pay in sterling abroad, you could end up paying 8 per cent more
Claer Barrett

Are you ready for a holiday? Having toiled solidly through a month-long heatwave in London, I have a horrible feeling that it will end up tipping down for the precious weeks we manage to snatch away from the capital.

Regardless, I never feel like I am truly on vacation until I’ve arrived at our destination (usually in Italy), ordered my first Aperol Spritz and taken a deep sip. And relax!

However good it tastes, you may find yourself plunged back into a stressful situation when the bill arrives. Typically, when you put your card into a foreign payment terminal, it will ask you to make a decision: “Do you want to pay in pounds or euros?”

Pick the wrong one, and you could end up paying nearly 8 per cent more than you need to, according to new research into the phenomenon that is “dynamic currency conversion”.

So before you jet off, repeat this mantra: never pay in pounds abroad, always pick the local currency. Now that’s lodged in your head, I’ll explain why.

Dynamic currency conversion — in my view, a fancy name for a rip-off — is widespread in Europe and parts of Asia, but less so in the Americas.

European “chip and pin” card transactions in shops, restaurants and hotels and cash withdrawals from ATMs are likely to give you a choice between GBP and EUR. Psychologically, opting to pay the amount shown in pounds could seem like the right choice. You know where you are with pounds. But the exchange rate that you are locking into is likely to be a shocker.

The average conversion rate on “dynamic” transactions is 7.7 per cent, according to a study by FairFX, the currency group. After analysing hundreds of thousands of card transactions this year, it found that nearly a quarter of card spending abroad happens “dynamically” and estimates this will cost British tourists nearly £500m in additional charges this year. That’s a lot of Aperol Spritz. 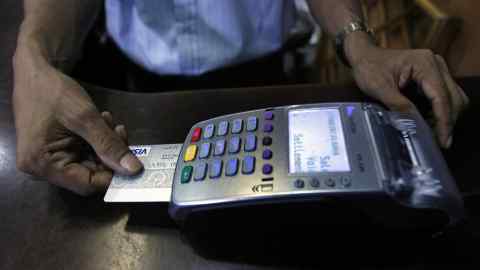 “People like to pay in their home currency as they instantly understand how much it costs,” says James Hickman, chief commercial officer at FairFX. “What they don’t understand is how much they are paying for that convenience.”

The upside is split between the restaurant, shop or hotel and the company from which they rent their payment terminals.

Mr Hickman says the “hidden” nature of poor conversion rates prevents tourists from understanding the extent to which they are being had. After all, who is going to compare conversion rates on their smartphone while under pressure to pay and return the terminal? So far, financial regulators around the world have done little to police the rise of “dynamic” conversion. But this is a holiday that needs to end.

It is also not the only holiday currency pitfall for those spending on plastic.

Most UK-issued debit and credit cards will apply a currency conversion fee of about 3 per cent to non-sterling transactions, which will appear on your final bill. This is likely to be less than the “dynamic” charge, but beware — some debit cards also charge a fixed fee of up to £4.50 per transaction on overseas spending and cash withdrawals (step forward TSB).

Time for some good news. With some pre-trip planning, it is possible to avoid these charges and get the “pure” Mastercard or Visa conversion rate, with no fees.

You have three options:

A must for frequent travellers, fee-free cards will cut the cost of two major holiday purchases — the hotel and hire car — which you will almost certainly need a credit card to guarantee. If you’re booking online in the UK, make sure the fee-free card is the one you use.

The Barclaycard Platinum Travel Card offers fee-free transactions and ATM withdrawals overseas, but you must pay the balance in full to avoid interest charges on the cash (otherwise 19.9 per cent APR).

The Halifax Clarity credit card has the same perks, but even if you pay off the balance in full, you will still be charged interest on the cash withdrawals from the day they are made (APR 18.9 per cent). There is currently a £20 cashback offer which may offset this cost.

Obviously, there is little point getting a credit card to save money on currency fees if you fail to clear the balance and get clobbered for the interest.

In a bid to boost customer numbers, challenger banks have some tempting options and there is no need to do a full switch, you can just open an additional current account.

Metro Bank’s debit card charges no fees on spending or ATM withdrawals in Europe, and the bank offers same-day account opening in its branches, meaning you can walk away with a card before you fly.

For those travelling further afield, app-based banks Starling and Monzo are also worth checking out. Starling offers fee-free overseas spending and unlimited ATM withdrawals; Monzo has fee-free spending, but now caps cash at £200 per month and charges 3 per cent above this rate.

Finally, the Revolut app’s standard service has no monthly fee or foreign transaction fees on its Visa card, with up to £200 per month fee-free ATM withdrawals. A delivery fee applies.

I love the functionality of these services. You get instant notifications on your smartphone when you spend or withdraw cash and can keep on top of your budget, plus it’s easy to disable cards on the app if you misplace them.

These digital perks are also available on pre-paid cards, but be aware that “guaranteeing” payments for hotels or hire cars may not be possible.

The most competitive providers include FairFX, Caxton and Revolut, but each has different currency conversion rates and fees depending on how you use them. Most have an app through which you can load money and remotely disable the card — making them a good choice to give to travelling children.

Finally, while most of your holiday spending will happen on plastic, I guarantee that you will come home with a pocketful of foreign coins. Consider donating them to the Alzheimer’s Society. Enter your postcode on their website, and the nearest drop-off point will be revealed. As well as “recycling” old coins and notes, it also accepts old mobile phones, meaning you can give your kitchen drawer a thorough post-holiday clear out.