Top 10: The most influential BAME tech leaders in the UK

Individuals who championed diversity in 2018
November 14, 2018
Jump to comments section Print this page

Whom did we miss? Nominate your picks for 2019.

At EY, Adrian Joseph works across areas such as tax, audit and consulting. Achievements include reaching a 50/50 gender balance in the data analytics team and a 50/50 BAME balance in financial hires. But he says “there is a lot more work to do in terms of sex, disability and LGBT diversity, and I hope to continue playing a part”.

Mr Ilube’s career has included roles at Goldman Sachs, PwC and the London Stock Exchange. He was named Britain’s most influential black person in the 2017 Powerlist and was awarded a CBE in 2018 for services to technology and philanthropy.

His other positions include non-executive director of the BBC and chair of the African Gifted Foundation, an education charity. Mr Ilube also launched Africa’s first science and technology school for girls, in Ghana.

With more than 20 years experience, Mr Akwue’s career spans design, advertising, social media, digital marketing and media. A passionate champion of diversity and inclusion, he is a trustee at Black Cultural Archives, and co-founded The Great British Diversity Experiment.

Nneka Abulokwe is one of the first black professionals to sit on the board of a top five European IT services organisation. During her 25-year career she has delivered large-scale IT projects for governments and private institutions across the world. Ms Abulokwe has received several professional awards and fellowships.

In 2017, she founded MicroMax Consulting, a consultancy which advises global boards on strategies and helps them create positive digital cultures.

As the son of a Chinese father and Australian mother, Bill Liao experienced the strengths of two strong and successful cultures in his home, but school was tough.

The bullying was relentless: “I was the only half-Chinese in the school. You name it, it happened. My one triumph was not ending up in hospital.”

But he says he was saved by tech and co-founded Xing, a European early social network; CoderDojo, a global movement of free, volunteer-led computer programming clubs; and RebelBio, an accelerator programme to fast track medical innovations.

“I want to give something back that would help all young people, and particularly BAME kids like the young me,” he says.

June Angelides was this year named the 15th most influential woman in tech by Computer Weekly. Providing immersive learning, Mums in Technology encourages new mothers to take their children to school with them while they learn to code.

She founded the company in 2015 when on maternity leave from Silicon Valley Bank, where she was an associate for entrepreneur banking.

Most recently, Ms Angelides was appointed chair of the Future Skills Programme, and joined the investment team at Samos Investments, a venture capital firm which focuses on high-growth European businesses.

She is also a founding ambassador for the FiftyFiftyPledge, a UK initiative to promote gender diversity.

Andy Ayim says the allocation of venture capital is heavily skewed with only 0.2 per cent of VC funding going to black women — so founders from diverse backgrounds are not provided with equal opportunities.

For seven years Mr Ayim has been building businesses with this belief in equal opportunity driving him to help underestimated founders create and scale their business.

He is also a member of UKBlackTech and a senior product manager at Investec.

Chelsea Chen brings her diverse global experience, including marketing and strategic planning to Emotech. The company was founded in 2014 and develops emotional AI — their robot Olly was reportedly the first with personality.

Ms Chen believes openness and communication can maximise the use of technology to change the world. She is also an active speaker on both emotional AI and women in tech.

After more than 20 years in the telecoms industry, Raj Kalia is now responsible for local full fibre networks and superfast broadband at the digital infrastructure arm of the UK’s Department for Digital, Culture, Media & Sport (DCMS).

Mr Kalia is an active part of the BAME network in the DCMS. “I am a firm believer in equally championing a range of topics not just diversity,” he says.

Kush Kanodia is a disabled BAME champion. He is able to walk today only thanks to assistive technology. A torch bearer for the London 2012 Paralympic Games, he is an entrepreneur who has developed a portfolio career helping social enterprises, non-profit organisations and charities including the Centre for Access to Football in Europe. His early career included a stint at Morgan Stanley, where he managed European data operations.

This article has been amended to show Adrian Joseph is no longer a board member for Business in the Community. 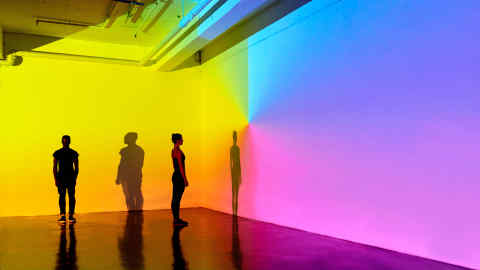