As parts of the world slowly emerge from lockdown, Kelly Chaaya is preparing to start her internship at a global bank. But the masters in finance student at HEC Paris will not be going into Citibank’s London office — instead her work will be done remotely.

Despite the unusual circumstances and economic uncertainty caused by the coronavirus pandemic, Ms Chaaya is optimistic about her prospects in the finance industry. “There will be some changes . . . but it is not going to be as impacted as other sectors, such as the media,” she says.

But those completing their MiF courses now join many other graduates who will have the difficult task of developing a career during a period of global economic shock.

Sentiment about internships and job offers is mixed among business schools and students, so it is difficult to predict how the landscape for MiF graduates will shift over the coming months. Broadly, though, there is a feeling that the finance industry will hold steady.

Olivier Bossard, executive director of HEC’s MiF, says the only factual observation he can make for the business school’s graduates is that companies are delaying or shortening summer internships. “The big investment banks are actually playing a very fair-play game with our graduates,” he says.

When it comes to job offers, those hiring from HEC are “still fully committed” to take people, Prof Bossard adds. “Only three firms so far have acknowledged that they would not be able to honour their commitments.”

Overall he does not expect big changes with investment banks. He points out that the pandemic has created a crisis in the real economy. “Relative to 2008, the banks are in a much better shape: more liquidity, better capital adequacy, risks are more under control,” he says. While things are alarming, “it is not, at least for now, a dramatic situation specific to banks, or the financial sector.” Prof Bossard is more concerned about the consulting sector, which he believes could be hit by cost-saving measures.

Anna Purchas, head of people at professional services firm KPMG, says that at this stage it is difficult to predict how the jobs market in consulting will shift for MiF graduates. But “some areas of the business, such as restructuring, are going to be very, very hot,” she says, “and that is an area where a strong analytical background and understanding of business is incredibly helpful”.

The company has cancelled its summer internship scheme as it did not think it could offer its candidates the best experience, but some of those due to take part have been offered places for the 2021 graduate intake.

In the US, however, Peter Cappelli, director of the Center for Human Resources at Wharton Business School, says internships are being rescinded. He adds that, while the companies cancelling placements have not finalised decisions on job offers, “my guess is that those will be rescinded as well”.

Even so, Prof Cappelli thinks the finance sector could be less affected than others “because finance and investing goes on”.

Christian Dummett, head of London Business School’s career centre, says the job market is always changing. In finance, asset classes and subsectors fall in and out of favour, while technology has disrupted traditional businesses. “Crises can accelerate this,” he says. But he believes that “coronavirus is more likely to affect the way we work — from home, less travel — rather than roles per se.”

Given that MiF graduates face uncertainty and could be competing against greater numbers of students for fewer jobs, what skills do they need to ensure a long-term career and how can they develop them while studying?

Coronavirus is more likely to affect the way we work — from home, less travel — rather than roles per se

Casper Quint, an MiF student due to graduate later this year from London Business School, recommends that as soon as students begin their programme, they should start to develop an idea of what they want to do. “Investment banking has a very different recruitment process from, for example, fintech,” he says.

LBS’s career centre helped him plan his approach, while he also says students should “reach out to alumni”.

Ms Purchas believes a core skill is showing adaptability. Graduates need to keep an eye on where the market is growing and where it is contracting, and think about how they can position themselves.

“When I think about my career, it has been a portfolio career,” she says. “I think that really is the way for people to think about their careers. There will be phases. You can learn from each [one], build on it and move across.”

She adds that, while they are doing their MiF programme, students should also be networking and learning from their peers, so they can demonstrate that they can thrive among people from diverse backgrounds.

Ms Chaaya says that while no one expects MiF students to be geniuses, they do need to know a lot about the technical aspects, as well as curious — “ask questions”, she advises. When interviews begin to become conversations rather than feeling like a grilling, the likelihood of success increases.

Despite the prospect of a tough period ahead, she recommends finance to anyone interested in working with numbers. There is always work, she says, “in the good times and bad times”. 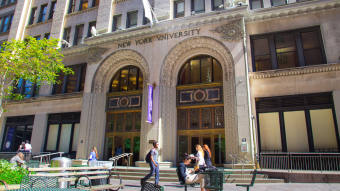 The FT’s 2020 ranking of the world’s best masters in finance programmes. Plus: how schools are learning to live with coronavirus; job prospects for this year’s graduates; why ESG gives teachers a headache; Hong Kong dean on the challenges ahead