Should colonial art be returned home?

In 2006, Neil MacGregor, then director of the British Museum, confidently asserted “repatriation is yesterday’s question”. He was speaking against the backdrop of a loan of historic east African artefacts to the National Museums of Kenya. MacGregor argued that circulating historic artefacts in such a way made issues of ownership redundant. At the time, others disagreed; 12 years later, the question is emphatically today’s.

In the context of acrimonious debate over immigration, globalisation, sovereignty, history, race and historic injustice, it was only a matter of time before a new generation of activists turned to museums. Now they have. Two weeks ago, Rapa Nui (Easter Island) elders and representatives visited the British Museum, seeking the return of one of its most famous statues. While campaigners from Australia have focused on artefacts in Cambridge and London associated with Captain Cook’s contacts with Aboriginal people at Botany Bay, the Republic of Benin has requested the return of works looted from the Royal Palaces of Abomey by colonial armies in 1892, held in the Musée du quai Branly — Jacques Chirac, France’s national institution for world art.

French legal frameworks were thought to exclude the possibility of repatriation of objects in the national collections. President Emmanuel Macron, who described colonialism as a “crime against humanity” during his election campaign, shattered this understanding late last year. In an address in Burkina Faso he announced “the temporary or definitive restitution of African cultural heritage to Africa” was a priority. Last month an official report went further calling for a change in the law paving the way for a return of artworks.

Given the frequency with which the case for returning the Parthenon Marbles to Athens is restated, it cannot really be said that repatriation was ever “yesterday’s question”. But apparently similar claims are actually very different. Some are from local communities with specific reasons for seeking to recover artefacts. Others are from national governments and touch on issues of sovereignty. All need to be considered on a case-by-case basis.

The single most ambitious museum development in Europe is that of the Humboldt Forum, a showcase of world cultures in the centre of Berlin. Most such projects generate debate, and the Forum’s architectural and curatorial concepts have been periodically questioned over its long gestation. But less than two years ago, what had been a marginal protest erupted across German media with the resignation from an advisory council of the historian Bénédicte Savoy, who asked “how much blood [was] dripping” from the ethnographic artefacts in the German national collections.

The Forum, which sought to exemplify the relativism and cosmopolitanism of the travellers and scholars Alexander and Wilhelm von Humboldt, as well as the inclusive ethos now generally articulated across the museum sector, was denounced as an expression of colonial violence. In response, the institution launched a project to clarify which of the tens of thousands of artefacts in its collection were looted rather than legitimately acquired.

In France, Macron’s Burkina Faso statement resonated with sea changes across the museum sector. Especially in ethnography and world cultures institutions, curators are increasingly committed to close collaboration with communities, rightly reflective upon histories of colonialism and collecting, and supportive of the redistribution of works, through loans or outright repatriation.

The president soon afterwards commissioned Savoy, together with the Senegalese economist Felwine Sarr, to produce a report. Macron asked for a “profound reflection upon our national collections”, towards “decisive action in support of the circulation of works and the sharing of knowledge of the contexts in which they were created, and also taken, sometimes pillaged, saved or destroyed”.

The resulting document, published on November 23, offers both rather less and much more than this. A passionate, sometimes eloquent polemic, it dismisses the project of circulation that Macron had cited, and that MacGregor celebrated. As collections cannot be dissociated from the historic crime of colonialism, whether actually looted or not, there is just one appropriate course of action, the authors insist: restitution, the return of works to their rightful owners. They envisage a process that commences swiftly, is wide-ranging and is moreover not time-limited. The implication is that the bulk of the African material in Paris’s Musée du quai Branly — Jacques Chirac should be seen as eligible for restitution, and ideally would return.

There are two common misunderstandings about the holdings of ethnographic museums. The first is that everything was stolen. Although the institutions were certainly products of the colonial era, and were established across many countries from the 1860s onwards, their collections are in fact heterogeneous and extraordinarily complex. They do include works such as the Benin Bronzes, some thousands of which were notoriously looted at the time of the sacking of the palace in Benin City (in Edo State, Nigeria, not to be confused with the Republic of Benin) in 1897. But they are made up, too, of extensive collections made from the late 18th century onward by European explorers, Christian missionaries, aristocratic travellers, traders and scientists, as well as colonial officials and the colonial military.

In some cases, travellers were dependent on indigenous people for personal security and hospitality; ethnographic fieldworkers, in particular, always needed to establish rapport and secure the active co-operation of the peoples they were attempting to study. The pieces they received were typically willingly bartered, by locals who themselves sought novel and prestigious or useful European products. Over centuries, too, local leaders made in effect diplomatic gifts to Europeans, sometimes of exceptionally sacred things.

The second general misconception is that peoples around the world, whose historic heritage is so richly represented in European museums, all want historic artefacts to be returned, or consider conditions right for return, just now. Some do feel strongly that objects made by their ancestors, some seen even as embodiments of their ancestors, only belong at home. But many Christians from the Pacific, for example, are ambivalent, typically regarding historic artefacts as still powerful — and dangerous. When Reverend Ikan Rove, from New Georgia in the Solomon Islands, visited the stores of the British Museum in 2005, he was insistent that objects formerly managed through taboos and ritual protocols could not now be looked after. “They may come back to life, and attack us, if we take them back,” he said.

Others are mindful of challenging political environments. Paul Nchoji Nkwi, an eminent Cameroonian academic, has remarked of African works in European and North American museums, “Let them stay where they are, for the time being.” Shayne Williams, a Sydney-region Aboriginal elder, has affirmed that artefacts obtained at the time of first contact by Captain Cook amount to “national treasure” for indigenous people, but fears that return would “spark local cultural dispute over whose family allegedly owns them” and is concerned about the “risk of illegal appropriation”. In his vision, “cultural exchange and partnership . . . may create greater space for the matter of repatriation to be considered closely and carefully over time”.

More affirmatively, the Maori sculptor and contemporary artist Lyonel Grant has stated that the extraordinary Maori meeting house of Rauru, in Hamburg, is “the very, very best ambassador we could ever have” in Germany. Most recently, Enotie Ogbebor, an internationally renowned Benin City artist, has stressed in reference to the Benin Bronzes that “some of them must come back”, while others should continue to represent the achievements of the kingdom in the world’s great museums. His aspiration is to see exhibitions of Picasso and Van Gogh, as well as of the art of Benin, displayed on tour at a new museum in Benin City.

InterviewLife & Arts
Artist Thierry Oussou: ‘If you take the king’s throne you take their place’ 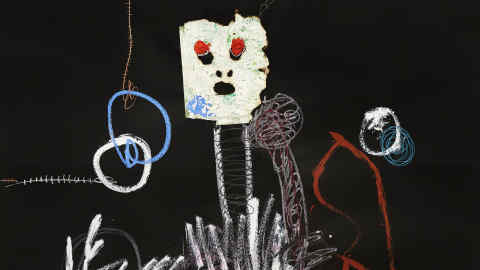 The debate unleashed in Germany models colonialism on another great historic crime. For decades, histories of empire were comparatively neglected in public discourse in the country, preoccupied as it was with Nazism and East-West division. Much consideration has been given to Raubkunst, art appropriated by the Nazis, subject to an uneven and erratic process of restitution. The German debate and the Sarr-Savoy report alike address what is sometimes explicitly referred to as colonial Raubkunst, loot that also ought to be returned. The extrapolation is understandable, but profoundly distorting.

Much polemic has been startlingly indifferent to the question of what might happen to works that are restituted. There are strong and dynamic museums and cultural centres in Oceania, Africa and among native American communities today, but also many nations in which the indifference of governments has resulted in neglected, under-visited and insecure museums. Yet the institutions have much to contribute, for example in support of the UN’s Sustainable Development Goals. They will only engage visitors and be socially effective if there is continuing investment in staff, skills and facilities. Hence, alongside the return of artefacts, European nations need to be open to partnerships that are responsive to local views as to how cultural institutions can support contemporary practitioners, communities, economies and nations.

The Sarr-Savoy report, and many activists, have derided the notion that art works and artefacts could be loaned back to countries of origin — this is seen as a tactic of retention that fails to acknowledge the collections’ criminal origins. But there are positive arguments for loans, which can be negotiated on a longer-term basis, within existing frameworks, obviating the need for protracted deliberation or legislative change. Temporary transfers — which can be extended and renewed — moreover provide a basis for co-stewardship and co-curation, for dialogue and deeper collaboration, that will also inform and enrich new displays in European museums, many situated in highly multicultural cities. Those museums’ visitors include members of the global diaspora, some from the same nations that art works originate from, as well as refugees who can only access their heritage through such collections.

Hartmut Dorgerloh, the general director of the Humboldt Forum, has conceded that “looted art must always be returned”. If public benefit rather than commitment to historic redress drove discussions about the future care and destinations of artefacts, this would not be so obvious. Some looted works cannot or should not be sent back, because of insecure conditions or because communities do not want them. But many works that were not looted could also appropriately be returned, if their identities and stories have much to offer locally.

The language of adversarial politics should not obscure the magnificence of the creations at issue. Whether spectacular or quotidian things, the artefacts and art works that grace the collections of European museums speak of our common humanity, the distinctive values and narratives of many cultures, and the histories of colonial engagement that have — for better or worse — connected the peoples of the world over recent centuries. Macron’s advocacy of circulation and the sharing of knowledge should be seen as inspiring. Some collections were made in the wrong way for the wrong reasons, but they now constitute compelling expressions of human creativity — they exemplify both what we share and what makes us distinctive, and the difficult histories behind the global order we all now inhabit. Museums already engage, to a greater extent than is widely recognised, in dialogue and exchange. There is scope to do so much more.

The writer is director of the Museum of Archaeology and Anthropology in Cambridge and author of ‘The Return of Curiosity: What Museums are Good for in the Twenty-First Century’