Shares in Toshiba staged their biggest one-day nosedive in more than four decades on Thursday as concerns over huge writedowns on the company’s nuclear business prompted fears of a full-blown crisis at Japan’s industrial conglomerate.

The share price slide, which scythed away more than a quarter of Toshiba’s market value at one stage, continued despite media reports — later confirmed to the Financial Times — that the company had held meetings with the Development Bank of Japan that could ultimately lead to an injection of state-backed capital.

After an initial fall of more than 9 per cent in the morning session, driven by Japanese media reports that the scale of the company’s writedowns could climb as high as $6bn, the market extended the sell-off to as much as 26 per cent. By the afternoon close, the shares were down 16 per cent — a reflection, said one Tokyo-based broker, of the fact that “the market still has no firm grip on the size of these writedowns, and suspects that Toshiba doesn’t either”.

Toshiba’s latest woes came to light on December 27 when the company admitted it would have to make writedowns of “several billion dollars” related to US unit Westinghouse’s $229m acquisition last year of Stone & Webster, the nuclear construction subsidiary of Chicago Bridge & Iron.

Toshiba shares are 51 per cent below their level when the writedown problem first emerged.

Best of the Big Read 2017
Shrinking to survive 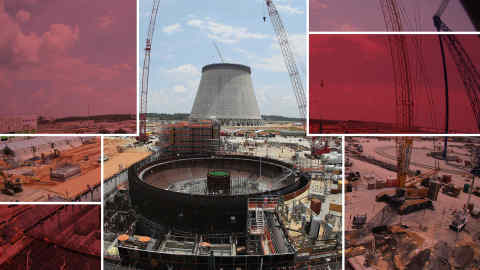 The range indicated by Toshiba suggested the scale of the writedowns was between $1bn and $4.5bn. But analysts have since estimated that the total writedown, to be announced by mid-February, could be between $5bn and $8bn.

Even the low end of that range would largely wipe out Toshiba’s ¥363bn ($3.2bn) of shareholder equity and leave the company scrambling for options.

As the writedown crisis has deepened, credit rating agencies have downgraded Toshiba. Some analysts have highlighted what they see as an increasing risk that a company that has been at the heart of Japan’s industrial progress could be delisted from the Tokyo Stock Exchange.

In another signal of distress, Toshiba convened an emergency meeting of its bank lenders in early January. Several regional banks have reportedly expressed “concerns” over extending loans to the conglomerate.

To help address a bigger-than-expected hole in its balance sheet, Toshiba has turned to the DBJ for financial support, but the state-owned lender has not yet decided how much funding will be provided or what form it will take, according to a person familiar with the talks.

The former leader in Japan’s global corporate expansion and technological innovation has faced humiliation after humiliation from soured investments, nuclear disaster and scandal. And after sell-offs, writedowns and a boardroom clear-out Toshiba’s troubles do not appear to be over yet, say Leo Lewis and Kana Inagaki

The Nikkei newspaper reported on Thursday that the DBJ was considering an investment in Toshiba’s Nand flash memory business through a fund jointly run with Sumitomo Mitsui Banking Corp.

Toshiba declined to comment on talks with the DBJ and added it was continuing to calculate the exact size of the writedown.

The company confirmed on Wednesday that it was considering spinning off its lucrative Nand memory business, which generated 15 per cent of the group’s ¥5.7tn annual revenue and has an estimated value of about ¥1.5tn.

Get alerts on Toshiba Corp when a new story is published