We’ll send you a myFT Daily Digest email rounding up the latest US insurance industry news every morning.

US state legislators and lawyers have threatened to force the payment of coronavirus-related insurance claims that the industry insists are excluded from its policies and could pose an “existential threat” to their business.

Members of Congress are also debating the need for legislation requiring insurers to pay for shutdowns caused by the virus, and bills that would have the same effect have been introduced in several states.

Insurers, which in the US are largely regulated at the state level, insist that their policies exclude pandemic coverage and that retroactive amendments would leave the industry insolvent.

“The losses involved would simply swamp the ability to pay,” said Joseph Wayland, general counsel for the US insurer Chubb. “It is an existential threat to the industry if it had to take responsibility for a risk it never underwrote and never charged for.” The chair of Lloyd’s of London, Bruce Carnegie-Brown, said that such a change would put the industry “in jeopardy”.

Earlier this month, a bipartisan group of US Congress people wrote to insurance trade associations urging them to “work with your member companies . . . to recognise financial loss due to Covid-19 as part of policyholders’ business interruption coverage”.

Will Kiley, spokesman for Republican Brian Fitzpatrick of Pennsylvania, who signed the letter, said the congressman was working with a bipartisan group from the House small business and financial services committees on a bill that would include federal support for insurers.

“The business interruption provision we are drafting is prospective, not retroactive, and will be federally backstopped in a public-private partnership,” said Mr Kiley.

Nydia Velázquez, a New York Democrat, said she was glad the letter, which she led, “did not go unheeded” and that while lawmakers had not seen specific proposals, she appreciated the industry’s “desire to be part of the solution”.

The legislative process is more advanced at the state level. Bills have been proposed in New Jersey, Massachusetts and Ohio.

New Jersey State assemblyman Roy Freiman, a Democrat, said there were enough votes in the assembly to pass a bill requiring insurers to pay out to businesses with fewer than 100 employees, but that he was delaying a vote while negotiations with industry groups continued.

“Business people envisioned a situation like this when they bought the insurance,” Mr Freiman told the Financial Times. “They didn’t opt in or opt out. They didn’t have a choice.”

Mr Freiman said that, having worked in insurance for decades, he knows that the industry provides a social good “but if they continue to take a hard stance, continue to quote chapter and verse, they will make Darth Vader look like Mother Teresa”. 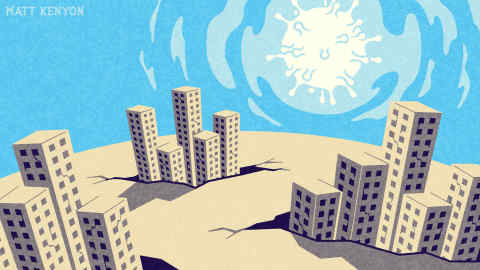 David Sampson, chief executive of the American Property Casualty Insurance Association, said the industry was taking measures such as temporary suspension of premium payments, to ease the burden on business, and would work with lawmakers in coming weeks as they weigh the need for another stimulus.

But, Mr Sampson said, the cost to cover small businesses with 100 or fewer employees across the US would run to $110bn-$290bn a month, rising to $900bn a month if the threshold was raised to 500 employees. Given that the industry only held $800bn in surplus capital, “you would be basically creating a solvency crisis”.

Lawyers representing policyholders contest the claim that pandemic risk was never insured. Robin Cohen of the law firm McKool Smith, said that “overwhelmingly, the coverage I am seeing does not have a virus exclusion”.

Instead, she argued, the policies required that there be physical damage to the business, and whether virus-related shutdowns met that criteria was the key legal issue. As for the industry’s claim that it would be left bankrupt, she said: “They say that in every disaster, from Hurricane Sandy to 9/11”.

In the UK, the chair of parliament’s Treasury Committee wrote to the Association of British Insurers last week, asking how much the industry was likely to pay out and how flexible it was prepared to be.

Video: Coronavirus: can we protect markets and companies?