Morgan Stanley has become the latest elite Wall Street bank to turn to Main Street for its future growth, adding stock trading millennials to its customer base with the $13bn acquisition of online trading platform ETrade.

The deal — the largest by a global bank since the financial crisis and the second biggest by Morgan Stanley — comes as rival Goldman Sachs chases American consumers with its mass market wealth management business and online bank.

It also comes at a time of consolidation in the US wealth management market, most notably November’s $26bn merger between ETrade’s rivals Charles Schwab and TD Ameritrade, in the wake of falling fees from stock trading.

ETrade has more than 5.2m clients with assets totalling around $360bn on the platform, and Morgan Stanley described those clients as a “pipeline of emerging wealth”.

The bank’s existing wealth management business, formed through decades of acquisitions including a $13.5bn deal to buy Smith Barney in 2009, manages around $2.7tn of assets for 3m typically wealthy clients.

After the deal, Morgan Stanley will make 57 per cent of its pre-tax profits from wealth management and investment management — less cyclical businesses that, since the financial crisis, investors have been valuing more highly than investment banking.

Analysts and investors have long pointed to the need for consolidation in financial services, so that institutions can achieve economies of scale and diversify.

Mr Gorman insisted that deal was “not about being bigger, it’s about strategy”. He also gave short shrift to suggestions that the deal was a reaction to the Schwab Ameritrade merger. “I first called and spoke to ETrade in 2002 when I was at Merrill Lynch,” he told analysts.

Chief financial officer Jon Pruzan told analysts that the deal would “modestly” hurt earnings per share in 2021, before breaking even in 2022 and improving earnings in 2023.

“The break-even period is long, but that’s not really the way we looked on it,” he said.

Under the terms of the all-stock deal, investors will receive 1.0432 Morgan Stanley shares for each that they own in ETrade. Shares in ETrade surged 24 per cent in mid-morning trading in New York, while Morgan Stanley, fell almost 4 per cent. 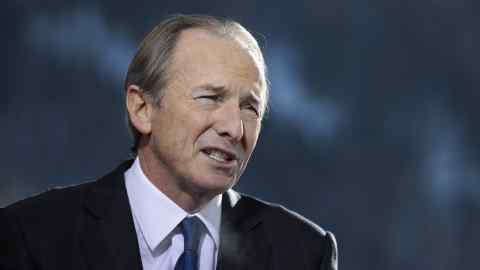 Analysts drew attention to the fact that the deal would reduce Morgan Stanley’s tangible book value per share by 10 per cent since the deal was struck at 16 times ETrade’s earnings and the bank only trades at 10 times earnings.

Still, commentary was largely supportive. Glenn Schorr, analyst at Evercore ISI, told clients it had “plenty of strategic positives”, including putting Morgan Stanley in a position to service “the full wealth spectrum” and giving them “consumerfacing tech platforms”.

ETrade, which was advised by JPMorgan, did not run a formal auction process after talks with Morgan Stanley began. While analysts speculated that Goldman Sachs would be a natural bidder for the company, it never expressed interest, one person involved in the deal said, though there was at least one other company circling.

The deal is still subject to regulatory approval. Mr Gorman told analysts that this was “not something we would have put to big chance”, but would not be drawn on whether regulators had implied they were happy for big banks to do mergers and acquisitions generally.

Get alerts on Morgan Stanley when a new story is published