ECB will struggle to rein in the euro, say investors

We’ll send you a myFT Daily Digest email rounding up the latest Euro news every morning.

The recent rise in the euro is causing consternation at the European Central Bank, but investors say its policymakers could have a tough task on their hands in trying to weaken the currency.

Senior officials at the ECB have become more unsettled at the euro’s gains since the coronavirus pandemic rocked the world’s financial markets earlier this year. The currency has risen from $1.06 against the dollar at its March low to briefly top $1.20 last week. A stronger euro weighs on the region’s economy by making exports less competitive, while also lowering the price of imports — at a time when the eurozone is already experiencing deflation for the first time in four years.

The euro’s rise is expected to trigger a further cut in the ECB’s forecast for inflation at its policy meeting on Thursday, taking it even further below its target of just under 2 per cent. But investors warn there may be little that the bank’s president, Christine Lagarde, and her colleagues can do to affect the exchange rate. The euro’s strength, they say, is largely the product of a big policy shift from the US Federal Reserve this year — as well as a show of support for Europe’s €750bn coronavirus recovery fund, established in July.

“For the ECB, trying to weaken the euro is an increasingly Sisyphean task,” said Peter Kinsella, head of FX strategy at Swiss asset manager Union Bancaire Privée. “It’s one thing for Lagarde to talk the euro down this week, but it’s less clear what they can actually do.”

Investors do not think the ECB has much room to lower interest rates from the current minus 0.5 per cent. The market is pricing in a further 0.1 percentage point cut in the deposit rate by next year, according to Nomura analysts. But they forecast the central bank will leave rates unchanged and instead increase its €1.35tn emergency bond-buying programme in an attempt to alleviate the deflationary pressure.

While most ECB policymakers agree that the euro’s recent rise is unwelcome, there is no clear consensus on what they should do about it. “We have to think how we are going to see off an unnatural appreciation of the euro,” said one member of the ECB’s governing council, speaking on condition of anonymity. “There is no immediate need to act forcefully — we are still awaiting signs of how the recovery is progressing.”

Although some council members take comfort from the idea that the euro’s strength reflects investors’ confidence in the EU’s response to the pandemic, others worry about it being outmanoeuvred by an increasingly dovish Fed.

The US central bank’s move to cut interest rates to near-zero in the face of the Covid-19 crisis reduced the appeal of holding dollar assets. The Fed’s shift last month to an average inflation target has weakened the greenback further and increased pressure on the ECB to respond with its own strategic review, which is due to be completed next year.

ExplainerMarket Questions
Will the ECB’s Lagarde try to talk down the euro? 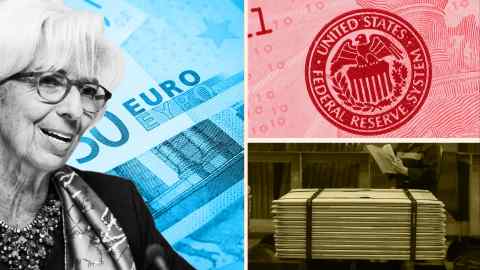 “The ECB has a huge challenge ahead in terms of containing euro strength against the dollar under the new Fed approach,” said Krishna Guha, head of global policy and central bank strategy at Evercore ISI.

The council member said the ECB had to “watch that US policy is not adversely affecting our own eurozone recovery”, adding: “I hope the governing council is not overly rigid in deciding and implementing the strategic review.”

Other policymakers are more relaxed about euro strength. Isabel Schnabel, an ECB executive director, said last week that any loss of competitiveness for eurozone exporters would be offset by the boost to global trade and growth from a weaker US dollar. “What we have seen is a reversal of previous safe-haven flows,” she told Reuters. “This is actually a good sign.”

Most economists expect Ms Lagarde to attempt a balancing act this week — talking down the euro by stressing how the central bank is prepared to loosen policy further if needed, but without announcing any big changes.

Bets on a stronger euro are close to their highest level on record, according to data from the US Commodity Futures Trading Commission. This bullishness creates the potential, analysts argue, for a pullback from the current level of just above $1.18.

But some investors are sticking to their guns.

“Verbal intervention lasts a day or two, but then the market is back to focusing on policy,” said Kacper Brzezniak, a portfolio manager at Allianz Global Investors. “On that front, I’m not sure there’s all that much they can do” to weaken the euro, he said.

Policymakers and politicians elsewhere in the world can “play the same game”, Mr Brzezniak added. “If Lagarde mentions the euro, I have no doubt that other central banks will start to talk about their own currencies, and Donald Trump will probably start talking about the dollar again.”

Video: What if inflation returns? | Charts that Count