Arsenal has the chance to lift its first European trophy in 25 years next week at the Europa League final in Baku, Azerbaijan. It also offers an opportunity for vindication of the London football club’s business model under Stan Kroenke’s ownership.

Victory over local rivals Chelsea would secure a place in next season’s Champions League — and a share of its €2bn prize fund. That compares with the €510m that is distributed among participants in the lesser Europa League.

Yet Vinai Venkatesham, the club’s new managing director and a speaker at the Financial Times Business of Football summit on Tuesday, says that of more pressing importance is retaining its place among England’s so-called big six clubs — and the firepower that brings to spend big on players.

Arsenal’s lack of silverware in recent years has resulted in antipathy among some fans, who accuse Mr Kroenke of chronic under-investment in players. Mr Venkatesham said it was a “misconception” that Mr Kroenke was an absentee owner. Instead, the American billionaire and his team are in daily contact with Arsenal executives.

He does, however, admit that the need to raise revenues is crucial.

Failure to qualify for the Champions League in the past two seasons has led to revenues falling from £419m in 2017 to £389.1m last year. The drop means Arsenal could soon be overtaken by bitter north London rivals Tottenham Hotspur, finalists in this season’s Champions League, in the rankings of the world’s highest-earning football clubs.

Mr Venkatesham insists that Arsenal has a “robust” business model: one more reliant on being a contender for the English Premier League, where it shares in roughly £8bn in multiyear broadcast rights, than keeping a regular place in the continent’s most prestigious club tournament.

Arsenal last won the Premier League in 2004. Next season, it will benefit from a new kit deal with German sportswear group Adidas and a renewed shirt and stadium sponsorship with gulf airline Emirates.

Mr Venkatesham, who took the post as the club’s main business leader at the start of the season, declined to provide financial details, saying only that they were worth more than current contracts. Last season, Arsenal earned £107m from sponsorship deals.

In the year to May 31 2018, Arsenal spent £205.9m on wages, up from £172m a year earlier. Mr Venkatesham says Arsenal will continue to spend heavily on players, vowing not to reduce the overall wage bill. Instead, the club is searching for better “efficiency” within its recruitment strategy.

In 2012, it acquired analytics company StatDNA, which is tasked with identifying undervalued players in the transfer market. The club is also investing in its academy to develop young players, so as not to rely overly on expensive foreign imports.

“Every penny that we generate as a club is available for us to spend against our ambition,” he said. “So, whether that is on wages or transfer fees — that’s where all the money goes. It doesn’t go anywhere else.”

Lunch with the FT
Brazil’s Ronaldo on owning a club, fame and playing under Berlusconi 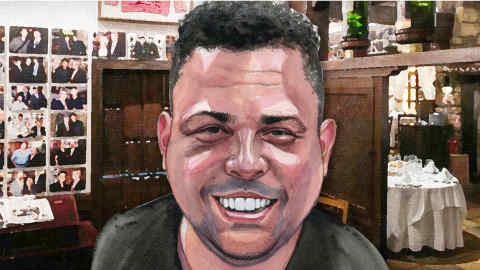 With the club’s focus on the Premier League for revenues, Mr Venkatesham railed against proposed changes to the Champions League and their potential threat to Arsenal’s finances.

It emerged this month that Uefa, European football’s governing body, is proposing a promotion and relegation system to ensure the best sides stay within the competition each season.

While Arsenal would be likely to benefit, Mr Venkatesham criticised the proposals, saying they threaten the primacy of the English Premier League as the most valuable club competition in world football.