A leading Hong Kong official has said senior members of the city’s government are finding it increasingly difficult to bank with foreign institutions as tensions mount between China and the US over the territory’s future.

Bernard Chan, convener of the Executive Council, the de facto cabinet that advises Carrie Lam, Hong Kong’s chief executive, said a US bank recently informed him it was closing his account and refunding his money. He declined to name the bank but said other senior officials were facing a similar issue.

Mr Chan’s comments follow growing acrimony between the US and China after Beijing imposed a national security law on Hong Kong that punishes crimes such as subversion with up to life imprisonment.

The US has retaliated with the Hong Kong Autonomy Act, under which Washington is expected to slap sanctions on mainland Chinese and Hong Kong officials who were involved in the implementation of the security law. Banks doing business with sanctioned officials risk being locked out of the US financial system.

They sent me the letter . . . saying thank you very much, we don’t want to do business, simple as that

The FT reported this month that US and European banks in Hong Kong have conducted emergency audits of their clients to identify Chinese and Hong Kong officials and corporates that could face US sanctions.

Mr Chan, who is also president of insurance company Asia Financial, said that while his account with the US bank was closed “recently”, just before the national security law was announced, the problem was becoming more common.

Banks have long had strict policies to deal with politically exposed clients but the US law would make them even “more cautious” in their dealings with local officials, Mr Chan said.

“They sent me the letter and sent me back the money, saying thank you very much, we don’t want to do business, simple as that,” he said. “I am so sure it’s not just me, I even talked to . . . government civil servants, [banks] don’t want some of them, too.”

Banks operating in the territory needed to avoid violating both the US legislation and the city’s national security law, which made it illegal to co-operate with foreign sanctions regimes, lawyers said.

Mr Chan said after talks with bankers he was not surprised they would be combing their customer lists not only for officials but also for pro-democracy activists. “It’s too much hassle for them,” he said.

Hong Kong pro-democracy activist Joshua Wong said HSBC recently questioned him about royalty income from the sales of a book that he was receiving in a personal account held with the bank. The account was still open, he said.

HSBC declined to comment. The bank said a previous decision to close an account that was used for fundraising for anti-government protests was due to compliance with anti-money laundering regulations. 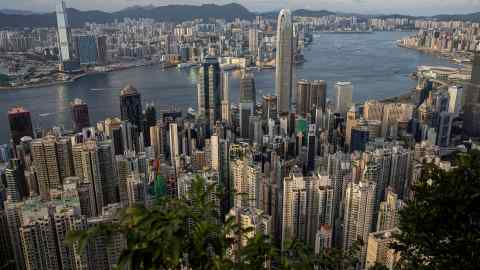 Global banks and funds operating in Hong Kong have been pressing regulators for clarity on whether closing an official’s bank account to comply with US sanctions would constitute a violation of the security law.

While Mr Chan said he could imagine why banks were “freaking out”, they should not expect “black and white” answers from the government on how to comply with both laws. That was a matter for the justice department and the courts.

“Closing a bank account is not endangering national security . . . unless there is proof that the US government is instructing the banks and telling the banks that this way is going to put pressure on the Hong Kong government,” he said.

Standard Chartered and HSBC publicly supported the national security law before its details were released.

StanChart, which has retail operations in the city, did not respond to a request for comment. Citibank, which also has retail branches in Hong Kong, declined to comment. A person familiar with the matter said Citibank was not the US institution that closed Mr Chan's account.