Seaside towns appear to have been some of the biggest beneficiaries of UK government measures to stimulate activity in high streets and restaurants, according to research by a public policy institute.

Bournemouth and Southend experienced the largest increase in visitor numbers during the first weeks of the “eat out to help out” scheme in early August, a study by the Centre for Cities said. Footfall rose more than 20 percentage points in the two town centres during periods when discounts for diners were active compared with previous weeks.

“The centres of coastal towns have seen some of the biggest increases in footfall over the summer,” said Lahari Ramuni, a researcher at the institute. “However, whereas the impact of lockdown was mixed for places by the coast, the biggest city centres have seen the biggest dips in footfall and they haven’t yet recovered.”

Data from mobile phone signals allowed the Centre for Cities to calculate trends in visitor numbers from Monday to Wednesday when the “eat out to help out” scheme was active. Warm weather and more people taking British holidays led to a stark contrast between seaside towns and some of the nation’s larger cities. London and Manchester city centres recorded only 3 and 6 percentage-point gains respectively in visitor numbers during the discount times in early August.

One Bournemouth restaurant owner questioned the effectiveness of discounts in the summer. “No one is going abroad this year so people are flocking to Bournemouth,” he told the Financial Times. “Government guidelines mean I only have half the space which I’m not struggling to fill. If [‘eat out to help out’] were available in January when people are not here that would be great but that’s why I haven’t signed up.”

“Eat out to help out” entitles diners to a 50 per cent discount on food and non-alcoholic drinks up to the value of £10. The Centre for Cities’ findings chime with official figures released this week that showed about 85,000 restaurants had taken part, serving an estimated 35m discounted meals in the scheme’s first two weeks.

Chris Giles
Higher prices hint at the impact of coronavirus 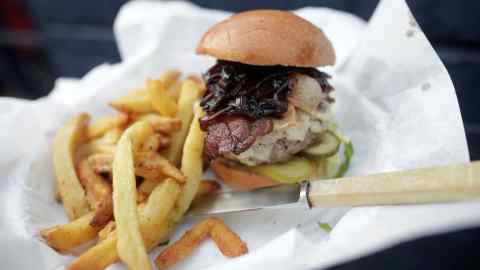 The scheme is part of a wider package of measures to help the hospitality and leisure sectors, among the areas of the economy hit hardest by the pandemic.

Workers’ reluctance to return to offices appears to be hindering the recovery for retail and hospitality businesses in larger cities. Weekday footfall in London and Manchester rose just 1 percentage point in early August compared with the previous month, the Centre for Cities said. Weekday footfall in Leeds, Bristol and Nottingham was unchanged, while Birmingham registered a decline.

With the “eat out to help out” scheme due to end on August 31, the outlook for restaurants and other hospitality venues remains uncertain. “A question mark remains over whether the footfall increase that we have seen this summer can be sustained into the autumn without the good weather and government incentive — particularly with so many people still working from home,” said Andrew Carter, the institute’s chief executive.

Video: Is it time to go back to the neighbourhood restaurant?