A pharma executive has defended his decision to raise the price of an antibiotic mixture to more than $2,000 a bottle, arguing there was a “moral requirement to sell the product at the highest price”.

Last month, Nostrum Laboratories, a small Missouri-based drugmaker, more than quadrupled the price of a bottle of nitrofurantoin from $474.75 to $2,392, according to Elsevier’s Gold Standard drug database.

Nitrofurantoin is an antibiotic used to treat bladder infections that was first marketed in 1953, which appears on the World Health Organization’s list of essential medicines. It comes in a tablet form as well as a liquid version that Nostrum makes.

In an interview, Nirmal Mulye, Nostrum chief executive, said he had priced the product according to market dynamics, adding: “I think it is a moral requirement to make money when you can . . . to sell the product for the highest price.”

Mr Mulye said Nostrum was responding to a price rise from Casper Pharma, which makes a branded version of the product known as Furadantin. Casper increased the price of its product by 182 per cent between the end of 2015 and March 2018, taking a bottle to $2,800, according to the Elsevier database.

Casper did not respond to a request for comment.

“The point here is the only other choice is the brand at the higher price. It is still a saving regardless of whether it is a big one or not,” said Mr Mulye.

Mr Mulye compared his decision to increase the price to an art dealer that sells “a painting for half a billion* dollars” and said he was in “this business to make money”.

David Crow
Trump is losing the war on drug prices 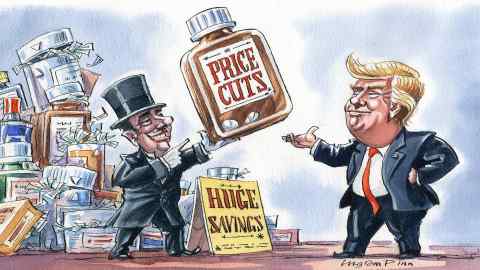 He also defended the actions of Martin Shkreli, who became infamous in 2015 for his decision to raise the price of an Aids and cancer drug from $13.50 to $750 per tablet. Shkreli was jailed earlier this year on unrelated fraud charges.

“I agree with Martin Shkreli that when he raised the price of his drug he was within his rights because he had to reward his shareholders,” said Mr Mulye.

Mr Mulye pointed out that Shkreli was able to increase the price of Daraprim so dramatically because his company was the only one making it.

“If he’s the only one selling it then he can make as much money as he can,” said Mr Mulye. “This is a capitalist economy and if you can’t make money you can’t stay in business.”

He added: “We have to make money when we can. The price of iPhones goes up, the price of cars goes up, hotel rooms are very expensive.”

Companies such as Nostrum and Casper have been able to raise the price of the antibiotic so dramatically due to supply shortages of the liquid version that were prompted by new rules on impurities from the US Food and Drug Administration.

Several suppliers, including Nostrum, removed their versions of the drug from the market to reformulate them to comply with the FDA regulations. The medicine now appears on a list of drug shortages that is maintained by the American Society of Health-System Pharmacists, although it is not on the FDA’s list of shortages.

The liquid version of nitrofurantoin has also been marketed by Amneal at a price of $486.94, although a spokesperson for the drugmaker said it had “put the product on tentative unavailable status”.

In a follow-up LinkedIn message after the initial interview, Mr Mulye said Nostrum had not yet started re-shipping the product, and that the price could change again “according to market conditions”.

Mr Mulye also launched an unusually outspoken attack on the FDA — which he described as “incompetent and corrupt” — and dismissed the new rules on impurities as a “piece of nonsense”.

He said Nostrum had lost money for several years and hit out at an increase in the fees that drugmakers must pay to the regulator, which he said were tantamount to “highway robbery”.

Liquid versions of antibiotics are normally given to people who cannot take pills — like children or the elderly — and they tend to cost more because they are complicated to make. However, nitrofurantoin costs significantly less in other countries such as the UK, where a slightly larger bottle is priced at £446.95.

The 404 per cent price increase for Nostrum’s product comes as Donald Trump’s administration declares victory in its battle against the soaring cost of prescription drugs in the US.

In July, Pfizer reversed price increases on 100 products after Mr Trump took to Twitter to say the company should be “ashamed” of the move, while several other drugmakers have promised restraint.

However, Michael Rea, chief executive of RX Savings Solutions, which makes software to help employers and patients lower their drug bills, said the Nostrum price increase showed it was “business as usual in the drug pricing world — contrary to what we hear out of Washington”.

He added: “The public shaming effect is waning and triple-digit price increases are not uncommon.”

What would Hippocrates make of drug price rises? / From Dr Michael Pravica, Henderson, NV, US