Get the newsletter now
Venezuela

Vanessa Silva in Caracas and Gideon Long in Bogotá

Venezuelans awoke to new petrol prices on Monday — and the realisation that for the first time in decades they will have to pay close to market rates if they want to fill up their tanks more than a few times a month.

The revolutionary socialist government unveiled its pricing regime over the weekend, risking the ire of people who are already suffering terrible hardships, and who for years have taken free petrol for granted in one of the most oil-rich nations on earth.

In the past, fuel price rises have triggered outrage and protests, most notably during the infamous “Caracazo” riots of 1989 in which hundreds died.

The new system comes as Venezuela suffers acute petrol shortages. Although it sits on some of the largest oil reserves in the world, its refineries are dilapidated due to chronic mismanagement. It is struggling to import chemicals because of US sanctions and has lost its capacity to turn its domestic heavy crude into gasoline.

The last of five oil tankers carrying petrol from Iran reached Venezuela at the weekend. Those supplies will help the country for a few weeks, and on Monday Tehran said it was “ready to send more ships” if Caracas asks. The US has urged other countries not to co-operate with the trade.

However, anyone who wants more will have to buy it from one of 200 designated petrol stations and pay 50 US cents per litre, only slightly cheaper than in the US and many countries in Latin America. They will be able to pay in dollars, an indication of how the US currency has permeated most aspects of Venezuelan life.

Furthermore, to get their heavily subsidised initial quota, people will need a valid “Fatherland Card”, a voluntary carnet introduced by President Nicolás Maduro in 2017. Many government opponents refuse to register for the card, saying the Maduro regime uses it to exercise totalitarian control.

“This is one more government joke,” said 66-year-old engineer Antonio Linares as he queued for petrol in Caracas on Monday. “You can’t divide the population in two, and that’s what they’re trying to do. I don’t have a Fatherland Card and I hope I don’t have to get one.”

At many petrol pumps, there was more confusion than anger. It is unclear how the government will enforce the quotas. Drivers of state vehicles and trucks can still fill up for free, offering a golden opportunity for arbitrage. Critics fear those with access to free fuel will siphon it off and sell it at inflated prices.

“On Saturday I was about to pay $4 a litre on the black market because I haven’t had petrol since March,” said 37-year-old Jennifer Silva as she waited in line. “How can it be that as an oil-producing country we’re importing petrol?”

Meanwhile, Venezuela has suffered another blow in its bid to sell its crude oil abroad.

Caracas used to sell much of its oil to the US, but Washington’s sanctions put a stop to that. Then Rosneft, Russia’s state-owned oil company, stepped in, acting as an intermediary for sales of Venezuelan crude, until the US sanctioned Rosneft’s trading arm in February. Rosneft responded by transferring its Venezuelan assets to a new state-controlled Russian entity. 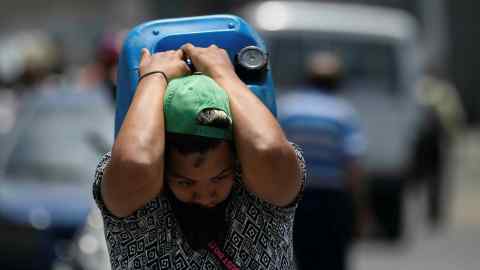 Since then, two Mexican companies appear to have taken up the slack: Libre Abordo, and its partner, Schlager Business Group.

Russ Dallen, the head of Caracas Capital, an investment bank, said the two groups bought almost 80 per cent of Venezuela’s oil in April and May as other potential buyers shied away due to the fear of sanctions.

But in a statement on Sunday Libre Abordo said it was now bankrupt and Mr Maduro “has announced the end of our exchange agreements”. It said it had been forced out of the Venezuelan market by “international political pressure”, and complained of “the pressure the US government has exerted to halt our operations”.

“This bankruptcy doesn’t surprise me at all,” said Gonzalo Monroy, a Mexican energy analyst. “There are quite clear consequences if you try to challenge them [the US] and do business with Venezuela.”

Venezuela’s oil output has crashed during 21 years of leftwing rule. A founding member of Opec, the country used to supply about 15 per cent of the world’s oil. Now it accounts for less than 1 per cent.

Having produced more than 3m barrels a day in its heyday, its output has dropped to about 600,000 bpd, and it is struggling to sell at a profit due to US sanctions and depressed demand amid the coronavirus pandemic.

Get alerts on Venezuela when a new story is published