For the world’s central bankers gathered in Jackson Hole, there was a sense that things would never be the same again.

The developed world had experienced a “regime shift” in economic conditions, James Bullard, president of the St Louis Federal Reserve, told the Financial Times. “Something is going on, and that’s causing I think a total rethink of central banking and all our cherished notions about what we think we’re doing,” he said. “We just have to stop thinking that next year things are going to be normal.”

Interest rates are not going back up anytime soon, the role of the dollar is under scrutiny both as a haven asset and as a medium of exchange, and trade uncertainty has become a permanent feature of policymaking.

Policymakers acknowledged they had reached a turning point in the way they viewed the global system. They cannot rely on the tools they used before the financial crisis to shape the economic environment, and the US can no longer be considered a predictable actor in economic or trade policy — even though there is no imminent replacement for the US dollar in sight.

The gathering at Wyoming came as US president Donald Trump on Friday vowed to raise tariffs on $250bn worth of Chinese imports. His threat capped a tumultuous day on the world’s financial markets that began with Beijing announcing new levies on $75bn of US imports and saw Jay Powell, Federal Reserve chairman, caution that it was not the central bank’s job to run trade policy.

The resulting market sell-off suggested investors were waking up to the reality that there will be no deal between the world’s two largest economies and no clear end to the trade conflict, just continued uncertainty. 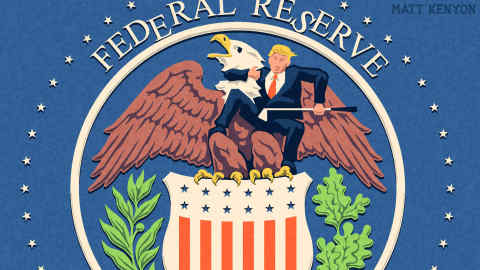 He said it was becoming clear that there had been two long-term changes to the underlying economic environment. The first is that central banks will not be able to return to the policies they relied on before the global financial crisis. Policy rates will not rise again to 5 per cent and central bank balance sheets will not soon return to zero.

This problem is worse for Europe and Japan than it is for the US, but given the interconnectedness of the global economy it is relevant around the world.

The second shift highlighted by Mr Bullard is that for businesses, the Fed and global central bankers, the US is no longer in trade negotiations. It is in a period of extended trade uncertainty, with long-term consequences for corporate investment.

Both Mr Bullard and Robert Kaplan, president of the Dallas Fed, pointed to Mr Trump’s trade policy on Mexico — rather than China — as a crucial driver of this uncertainty. In May Mr Trump threatened tariffs on the US’s neighbour, a country with which he had already negotiated a new trade deal to modify Nafta.

For companies in the Dallas Fed’s district, with supply chains that reach across the border, Mr Kaplan said, “the light went on and they shifted their stance”.

“We have to position ourselves understanding that we could wake up any day of the week and have a trade surprise even with people we have agreements with — and that’s not just with China,” he said.

For the first time in years, according to Mr Kaplan, central bankers are dealing with a problem that monetary policy did not cause and cannot fix. “The fulcrum for what’s happening and the direction of the economy is more about trade policy,” he said.

And there is another aspect of the US role in the global economic system that preoccupied Jackson Hole attendees: the status of the dollar in the international monetary system.

The US accounts for only 10 per cent of global trade and 15 per cent of global gross domestic product but the dollar is used to price half of trade invoices and two-thirds of global securities issuance, said Mark Carney, the Bank of England governor. He argued that this created distortions in the global monetary system that undermined the effectiveness of policymaking.

Adair Turner
Central banks have lost much of their clout 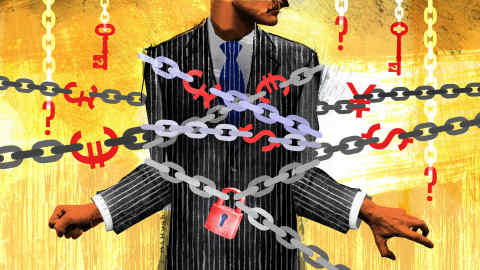 Maurice Obstfeld, a former chief economist of the IMF now at the University of California, Berkeley, said that when other countries could predict US behaviour, they were more willing to cede control of the global monetary system to Washington. But that approach is coming under increasing scrutiny. “When the US was viewed as a responsible leader of the world economy, there was less concern,” he said.

Sebnem Kalemli-Ozcan from the University of Maryland said US monetary policy pushed investment in and out of developing economies in ways that their own central banks could not control.

Mr Carney made the radical suggestion that a private or state-run digital currency could serve as a global counterbalance to the dollar. But he and others acknowledged that there was no realistic mechanism to decouple the global economy from the US dollar in the short term.

“The best [policy] would be: get rid of this political uncertainty,” said Mr Bullard. “Then you wouldn’t have this issue.”