‘Loss and damage’ debate set to dominate at COP27

We’ll send you a myFT Daily Digest email rounding up the latest COP27 news every morning.

World leaders attending this month’s UN climate summit are gearing up for a renewed battle over whether rich countries should provide financial support to developing nations, to help them cope with the consequences of rising global temperatures.

The question of so-called “loss and damage” funding for developing nations has been contentious for years, with rich countries reluctant to accept financial responsibility for climate change caused by industrial activity and offer compensation to poorer countries.

But many developing countries, such as the low-lying Pacific island states vulnerable to sea level rise, are stepping up their demands. They want to see the creation of an international loss and damage finance facility — a type of fund — at November’s COP27 UN summit, hosted by Egypt.

“Wealthier countries bear a moral responsibility” to help poorer nations recover, adapt and build resilience to disasters, said António Guterres, UN secretary-general in October. “Let’s not forget that 80 per cent of emissions driving this type of climate destruction are from the G20.”

Alex Scott, an analyst at environmental think-tank E3G, says the UN summit will be a test of how willing governments are to grasp what’s needed to address growing climate impacts — particularly after the recent devastating floods in Pakistan.

Without some movement on the subject of paying for loss and damage, “the legitimacy of [the UN process] will be challenged,” argues Laurence Tubiana, chief executive of the European Climate Foundation.

While last year’s COP26 summit in Glasgow attracted much fanfare, and was attended by political and business leaders from around the world, the conference in Sharm el-Sheikh is expected to be a more procedural and low-key event.

The Egyptian presidency wants to place the focus on the implementation of the wide range of promises made since the 2015 Paris accord, which broadly divide into efforts to reduce emissions, adapt to climate change, and provide money to help the most vulnerable countries do both.

“The number one priority is implementation,” says Wael Aboulmagd, Egypt’s COP27 ambassador. “Everyone has to be part of the conversation.”

However, only a handful of countries had updated their emissions reduction plans by the end of October, despite pledging in the COP26 agreement to “revisit and strengthen” them by the end of 2022.

Current pledges by nations that have signed the agreement put the world on track for a temperature rise of between 2.4C and 2.6C by 2100, the UN Environment Programme said in October, which is above the Paris Agreement’s redline target of 2C. Ideally, warming would be limited to 1.5C, though temperatures have already risen by at least 1.1C since pre-industrial times.

Aboulmagd said in a recent briefing that the Egyptian team had been “working the telephones” to encourage countries to upgrade their pledges.

Rich nations had promised to mobilise $100bn a year in support of poorer countries by 2020. But research shows they fell short, at $83.3bn. Most recent estimates by US climate envoy John Kerry suggest the figure may have since reached $90bn. But, in addition to subscribing to the full amount, signatories need to agree on a new target for climate-related financial aid to be delivered from 2025.

Meanwhile, China and the so-called Group of 77 — a coalition of developing nations at the UN — will propose that loss and damage financing be included as an important topic for discussion on the official COP27 agenda, which is due to be finalised at the start of the summit.

In Glasgow last year, rich nations rejected a proposal for a loss and damage finance facility, although countries agreed to start a “dialogue” on the issue.

While the calls for the creation of such a facility have grown increasingly loud in the run-up to the talks in Egypt, anything included in the final COP27 agreement will require the unanimous approval of more than 190 parties to the Paris Agreement.

Nevertheless, the Egyptian hosts say they are committed to making progress on the issue, and have appointed ministers from Chile and Germany — including Jennifer Morgan, the former executive director of Greenpeace who is now Germany’s climate envoy — to co-ordinate discussions on the subject at COP27.

Vulnerable countries will be hoping these talks are fruitful, as they did not leave Glasgow with “any amount of satisfaction” on loss and damage, says Aboulmagd. “We all have a collective obligation to ensure that this issue is addressed, and particularly the funding side of it.”

Conrod Hunte, deputy chair and lead climate negotiator for the Alliance of Small Island Developing States, says it is important that any agreement on loss and damage includes a financing element. “We’re reaching our breaking point, our limit, both literally and figuratively,” he says.

However, during New York climate week, in September, Kerry pushed back on the need for financing specifically for loss and damage, arguing the focus should instead be on so-called mitigation projects. He has since said the US is prepared to discuss loss and damage financing at COP27. The EU is expected to resist the idea of creating a fund.

We’re reaching our breaking point, our limit, both literally and figuratively

Reaching a unanimous agreement — let alone one that includes a decision on compensation — is always a challenge at the COP, but it is likely to be particularly difficult this year given the geopolitical context.

Poorer populous nations, such as India, have stressed the need for financial support if they are to transform their energy systems and economies to limit greenhouse gas emissions, while richer nations are now also scrambling to provide support to their own citizens amid a worsening cost of living crisis, with their budgets already depleted by pandemic support measures.

Yet scientists and international bodies such as the IMF have outlined the grave cost to all countries of backsliding on decarbonisation and climate change commitments, and said rich nations must provide support for the most vulnerable. Climate justice is expected to be an especially prominent topic at an African-hosted COP, as a result.

Speaking at the Africa Adaptation summit in September, Moussa Faki Mahamat, chair of the African Union Commission, said there was “a strong imbalance between Africa’s responsibility [for climate change] and the volume of resources it receives” for mitigating and adapting to the crisis. “This is where one of the most shocking injustices towards our continent resides.”

E3G’s Scott says the world is at “a multi-crisis moment” — but COP27 must demonstrate progress and co-operation among leaders on climate finance, reducing emissions and transforming the real economy.

“It’s possible that it will be very disappointing and then the story out of COP27 is one of failure and lack of coming to grips with the scale of the challenge,” she warns. That would only pile the pressure on to next year, when it is likely that geopolitical events and energy crises “still won’t have let up”.

READ MOREManaging Climate Change
Why act now on climate change? Look at the disasters around you 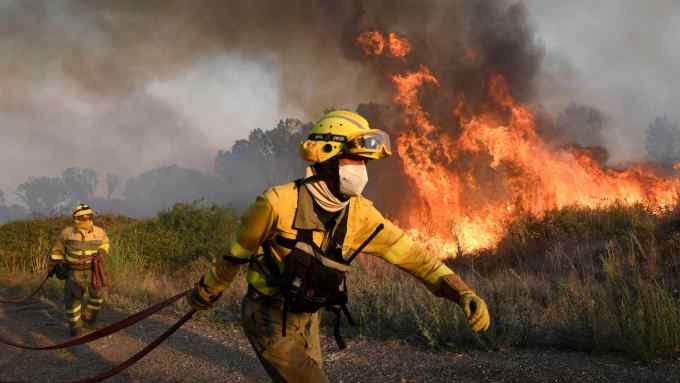