US delegation to press Turkey for Syrian ceasefire

Demetri Sevastopulo and Aime Williams in Washington, Laura Pitel in Ankara and Henry Foy in Moscow

Donald Trump said he was being “very tough” on Turkey as a high-level delegation led by his vice-president prepared to fly to Ankara on a mission to persuade Turkish president Recep Tayyip Erdogan to end his military incursion in north-east Syria.

Mr Trump is attempting to repair the damage done last week when he appeared to give Mr Erdogan a green light to launch an attack on US-backed Kurdish forces in Syria who had been critical allies in the campaign to defeat Isis jihadis.

“We’re being very tough on Turkey, ” Mr Trump said on Tuesday afternoon. “We’re asking for a ceasefire. We put the strongest sanctions you can imagine.”

US officials have spent the past week scrambling to respond after Mr Trump ordered the withdrawal of dozens of US special forces who had been operating in the border area where Turkey launched its incursion.

In recent days, US officials have argued that Mr Trump had no choice since Mr Erdogan was adamant that he would proceed. But Democrats and Republicans have slammed the president for what most view as a bungled policy move by the US president that resulted in Turkey beginning its military operation on Wednesday last week.

In a sign of the seriousness of the situation, Mike Pence, the US vice-president, will be joined on his trip to Turkey by Mike Pompeo, secretary of state, Robert O’Brien, the new White House national security adviser, and James Jeffrey, the state department envoy for Syria policy. Mr Pence is expected to meet Mr Erdogan on Thursday, according to his office.

Video: US imposes sanctions on Turkey

“Vice-President Pence will reiterate President Trump’s commitment to maintain punishing economic sanctions on Turkey until a resolution is reached,” his office said. “The ongoing violence in the region severely undermines the [anti-Isis] . . . campaign, endangers civilians and religious minorities, and threatens the security of the entire region.”

In the meantime, the Kremlin said Mr Erdogan had accepted an invitation to visit Moscow “in the coming days” in a call late on Tuesday with his Russian counterpart Vladimir Putin, in which the two leaders had noted “the need to prevent conflicts between units of the Turkish army and the armed forces of the Syrian government”.

Earlier on Tuesday Russia deployed troops in north-eastern Syria to help reassert control over the territory in the wake of Turkey’s military onslaught against Kurdish forces, labelling Ankara’s incursion “unacceptable”.

Alexander Lavrentiev, President Putin’s special envoy for Syria, said that Ankara’s offensive had not been agreed with Russia, despite the Kremlin having emerged as the most influential foreign power in Syria.

In the harshest comments yet from a Russian official, Mr Lavrentiev said Moscow had “always believed that any military operation in Syrian territory is unacceptable”.

He said that the security of the Turkish-Syrian border “should be ensured . . . by way of deploying government forces along the entire border” — a suggestion that directly conflicts with Ankara’s plan to control a 32km-deep stretch of territory in the country’s north-east.

The warning from Moscow and the announcement that Russian soldiers had been deployed on the front line between Syrian and Turkish troops came two days after Kurdish forces struck an emergency deal with the Syrian regime in order to ward off a Turkish assault against them.

That pact has seen Syrian leader Bashar al-Assad, backed by Russian firepower, re-establish a military presence in several northern towns that had been controlled by US-backed Kurdish forces under the Syrian Democratic Forces umbrella.

Mr Erdogan insisted on Tuesday that Ankara was proceeding with its plan to assert control over a 480km stretch of the border from the Syrian town of Manbij, east of the Euphrates river, to the Iraqi border. He vowed to secure the region “within a short time”.

But the strong words from Russia served as a reminder of the constraints likely to be imposed by other foreign powers. They came less than 24 hours after Mr Trump announced US sanctions on Ankara.

Sinan Ulgen, chairman of the Istanbul-based think-tank Edam, said that, from a military perspective, Mr Erdogan could control the whole border region if he wanted to. But he added: “The obstacle is of a more political nature, about what happens if he decides to do it.”

Kerim Has, a Moscow-based analyst of Russia-Turkey relations, said he believed that Mr Erdogan had hoped to gain “much more territory” after launching his offensive last week but had been boxed in by the rapidly shifting dynamics and the demands of Washington and Moscow. “Ankara, in my opinion, doesn’t have any choice other than reaching a deal with Russia and the US,” he said.

The Pentagon has begun withdrawing weapons and equipment from air bases in northern Syria, and will proceed to move 1,000 troops out of the country, in line with the desire by Mr Trump to remove the US from “endless wars” in the Middle East.

Despite a pledge by Mr Erdogan to send Turkey-backed Syrian rebel groups into Manbij, the Syrian army moved into the border town on Tuesday, filling a vacuum left by US forces whose bases there had been part of an effort to assuage Turkey’s security concerns.

Roula Khalaf
The Syria debacle: what Trump and Obama have in common 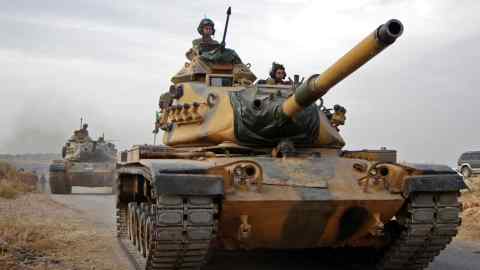 At least 160,000 people have fled a week-long Turkish military advance into north-eastern Syria, launched by Mr Erdogan against Syrian Kurdish forces linked to Kurdish militants who have waged an insurgency inside Turkey for four decades.

Sign up here to the new podcast from Gideon Rachman, the FT’s chief foreign affairs columnist, and listen in on his conversations with the decision makers and thinkers from all over the globe who are shaping world affairs