Max Seddon in Moscow and Valerie Hopkins in Budapest

A Moscow-based development bank’s imminent move to Hungary has alarmed western diplomats, who fear that Budapest is drawing closer to the Kremlin as it finds itself increasingly at odds with Brussels.

The International Investment Bank — which styles itself as a smaller version of the European Bank of Reconstruction and Development — is due to relocate its headquarters to Hungary in the second half of this year.

Hungary has touted IIB’s relocation — which was decided following a request by prime minister Viktor Orban to Russian president Vladimir Putin — as part of its push to make Budapest a global financial hub.

But Mr Orban’s critics fear the move, and the privileges and incentives offered to IIB, underline the central European country’s drift away from the EU towards Russia’s orbit.

Opposition MP Zita Gurmai called the bank “Putin’s Trojan horse” while the US state department has warned that Russia would use the IIB “to expand its malign influence in Hungary and across the region”.

Mr Kosov’s father was the top operative in Budapest for the KGB throughout the 1970s; his mother was described by Russia’s Tass news agency as “one of the most extraordinary spies of the 20th century”.

In an FT interview, Mr Kosov dismissed criticism of the IIB plan as “black propaganda” and accused its detractors of “total ignorance” of the bank’s operations. “The bank is completely free from any influence of Russian secret services — or those of the EU and Nato,” he said. “As they say in Russia, a son is not responsible for his parents.”

The Hungarian government and the EBRD declined to comment on the IIB’s move.

As Hungary’s ties with Brussels fray over Budapest’s threats to judicial and media independence, its relationship with Russia has blossomed.

Kremlin-run Rosatom is building two Russia-financed nuclear reactors for €12.5bn in Hungary just as the US is becoming increasingly concerned about eastern and central European reliance on Russian energy.

Observers say Mr Orban may also be searching for alternative sources of financing amid concerns that the EU will disburse less money in the next budget cycle because of a Brussels proposal to link funds with rule of law benchmarks.

Mr Kosov said IIB was “outside politics” and too small to finance large deals. IIB has just 100 employees and €1.3bn in assets — compared with the EBRD’s €41.4bn.

Its critics argue that the bank’s small size raises questions over Mr Orban’s motives in wooing it.

“I don’t remember a single precedent of Hungary receiving such an institution in Budapest,” said Andras Deak, a Russia expert at the Hungarian Academy of Sciences’ Institute of World Economics. “This is happening on an EU territory in the time of financial sanctions against Russia.” 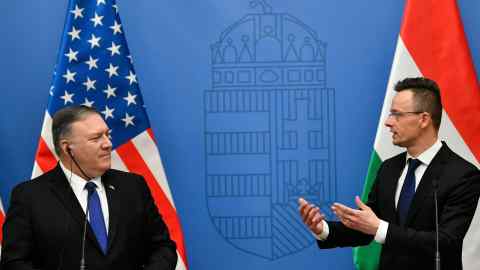 Mr Kosov said the reluctance of commercial banks to lend to small and medium-sized businesses had created a niche for IIB, which recently saw S&P upgrade its long-term rating to A-.

Its existing projects in the EU include a foie gras producer in Hungary, an overhaul of a small Slovak town and various greenfield developments.

Mr Orban has agreed to grant IIB a broad range of privileges, including complete immunity from any regulatory or prosecutorial authority, diplomatic status for the bank’s building, employees and guests, and Hungarian funds for the bank’s headquarters, including renovation and rental costs.

Mr Kosov denied Budapest was giving the bank special treatment. “We don’t have any privileges or immunities that any other UN-recognised organisation doesn’t have,” he said.

The bank’s history as part of the Soviet machinery has aroused the most criticism.

Founded in 1970, IIB was originally a financing agency for Comecon, the Soviet-led economic bloc. It foundered after the USSR’s collapse, requiring Russia to prop it up until 2012, when Mr Kosov was hired to launch a turnround plan.

Among IIB’s nine shareholders are former communist EU states including Hungary, Romania and Bulgaria, as well as Cuba and Vietnam, which continue to be governed by communist regimes. Together, the EU countries have the largest share in the bank, but Russia remains the largest individual shareholder.

In his first stint as prime minister in the 1990s, Mr Orban withdrew Hungary from the IIB over suspicions about its opaque operations. His subsequent decision to rejoin was a sign of IIB’s revival, Mr Kosov argued. “They were the first to see it change,” he said.

In Hungary, the IIB is still perceived as a Cold War-era cover institution for the KGB, said Andras Racz of the Budapest-based think-tank Political Capital. “This murky past is probably part of the reason so many people are concerned,” he said.

Mr Kosov himself spent several years in the USSR’s London embassy — in which capacity he said he met Margaret Thatcher “many times” and reviewed “key documents” — but denied he had worked for the KGB, pointing to his survival of a mass expulsion of diplomats in a Cold War spying scandal.

“That’s why they let me stay and work there,” he said.