Asking Opec to help save the US oil sector was not part of Donald Trump’s vision of “American energy dominance”. The US president’s role in brokering a deal between Saudi Arabia and Russia to end a damaging price war was intended to prop up oil.

Instead the deal fell flat, unable to overcome the collapse in global demand due to coronavirus, and with it went the shale revolution that transformed the US into the world’s top oil producer. The defining moment arrived on what traders have dubbed crude’s “Black Monday” when US oil prices plunged below zero for the first time, leaving even hardened oil executives wondering how a business forced to effectively pay customers to take their oil could recover.

The industry, whose growth allowed Mr Trump to boast of cutting US dependence on Middle Eastern oil and freed his hand to sanction energy exporters from Iran to Russia, is now on its knees. Producers across the US oil patch, many with higher costs than international rivals, are in acute distress, pleading for Washington to ease the pain by cutting foreign oil imports or including them in coronavirus bailouts to stave off bankruptcy and job losses.

“If I go out of business or shut wells it’s not just me,” says the head of one small oil producer, “it’s the five guys who service the wells, truck the oil, lease their trucks — and the community that depends on their tax dollars.”

Senators from oil-producing states, including Ted Cruz of Texas, are imploring the US government to include domestic energy producers in credit facilities for failing companies. A letter they sent on Tuesday said it could be the difference between “maintaining our domestic energy production” and “shedding more US jobs and returning to dependence on foreign sources of oil”.

Support of some kind now looks inevitable. But whatever form it takes, the retreat of the US oil sector looks likely to be every bit as stunning as its rise in recent years.

American production reached almost 13m barrels at the end of 2019 — the third year of increases that allowed the US, on its own, to meet the total additional annual oil needs of an expanding global economy. Since 2008, American oil production has more than doubled.

But output will be down to 11m b/d by 2021, according to the US Energy Information Administration. Scott Sheffield, head of Pioneer Natural Resources, one of the biggest shale producers in the US, told the Financial Times ahead of the US-brokered Saudi-Russia deal that at $10 a barrel, production would fall to 7m b/d — implying a drop greater than the total produced by Iraq, Opec's second-biggest producer. Even at $35 a barrel, output would end up 3m b/d lower, said Mr Sheffield.

That would be a serious blow to an industry that Mr Trump heralded in January’s State of the Union address for having made the country “energy independent”. By April, with prices in a tailspin, the EIA forecast that the US would “return to being a net importer of crude oil and petroleum products in the third quarter of 2020”.

Meghan O’Sullivan, the head of the geopolitics programme at Harvard’s Kennedy School, says the shale revolution had bolstered the US internationally by “altering the global strategic environment in a way that made it more conducive to US interests”.

“The global energy abundance that was in large part due to American shale . . . helped US allies and, on the whole, tended to harm its adversaries, from Iran to Russia to Venezuela,” she adds.

The economic fallout of the oil crash is potentially damaging for Mr Trump in an election year. The American Petroleum Institute, a lobby group for big oil companies, claims its sector accounts for 10 per cent of US gross domestic product, although other estimates are more modest. A recent paper from the Congressional Research Service said oil’s share of the trade deficit had plunged from almost half in December 2010 to minus 0.1 per cent in December 2019.

Those gains are now in doubt as big producers — from ExxonMobil to shale specialists like Continental Resources — slash capital expenditure or pledge production cuts. Already, the sector has axed about $53bn from planned spending of around $130bn this year, according to Rystad Energy. The number of rigs operating in US shale fields has dropped by 40 per cent in the past four weeks, according to Enverus, a data company. Output has fallen by 900,000 b/d over the same period, says the EIA.

Oil has bounced back to near $20 a barrel in recent days but is still less than half the price needed by most shale producers to break even, so deeper losses are inevitable. Ryan Duman, an analyst at consultancy Wood Mackenzie, says the US could shed between 2m and 3m b/d of output by the end of 2020 — far more than was lost in the 2015-16 price collapse. “[And] companies entered this downturn in much more fragile shape,” he adds.

Whiting Petroleum became the first big shale producer of this crisis to file for Chapter 11 on April 1. But the number of bankruptcies was trending higher before the price downturn, say lawyers at Haynes and Boone, which specialises in restructuring. A surge is now likely.

As the rigs are hauled in for hibernation, an entire supply chain — from fracking crews to catering companies — will bear the brunt. Almost 90 per cent of producers’ capex is used to pay oilfield services companies that actually do the work. Schlumberger, Baker Hughes, and Halliburton, the world’s three biggest service providers, are now slashing their own spending.

As many as 220,000 jobs could be lost in this sector, says Matthew Fitzsimmons, a Rystad analyst.

The pain will stretch from the multinational groups to local operators. Whiting’s filing lists 25 contractors it has not yet paid. Schlumberger, with an enterprise value of $37bn, is owed $9m. CS Welding, a family business in North Dakota, is owed $1.5m.

The sector is divided over how to respond. The API, which represents big oil, insists the free market should rule. Executives from smaller shale producers disagree, and say larger rivals are happy to see the distress spread so they can snap up stricken assets.

Some continue to blame foreign oil suppliers, pointing to vessels laden with Saudi crude sailing towards the US, despite a glut that threatens to overwhelm storage tanks.

Harold Hamm, a Trump confidant who runs Continental Resources, wants tariffs on oil imports. Other producers are demanding tax credits or for the government to buy their crude. Texas regulators are debating whether to revive a decades-old mechanism to enforce production limits.

“This is going to be a protracted and structural shift,” says Matt Portillo, at investment bank Tudor, Pickering, Holt & Company. Of dozens of operators in the shale patch now, he expects just 10 to 15 to survive.

The longer-term question is whether, as shale consolidates and the weaker companies are winnowed out, the business can grow again.

In 2015-16, shale producers outlasted an earlier Saudi price war by lopping almost 50 per cent from their costs and roping in investors to underwrite a spectacular new growth phase. As Opec began cutting supply again, US production leapt by almost 4m b/d in just three and a half years.

But that success masked Wall Street’s growing disenchantment with a sector that seemed to prioritise output growth over profitability. Shale executives may blame the pandemic and Saudi Arabia for their distress, but investors had already soured on the industry. Crimping costs this time will be much harder.

Some investors think another harsh consolidation in shale is much-needed. The bankruptcies and takeovers will put the shale rocks in fewer hands, but ones able to reach into deeper pockets: ExxonMobil, Chevron and a few other large independent producers with the heft to survive the downturn.

“The trade Wall Street is setting up for now is focused on producers that can survive this meltdown and clean up if the commodity rips higher due to the significant shut-ins,” says Andrew Gillick at RS Energy Group.

Those betting a diminished shale industry, and reduced production, might usher in a new era of $100-oil prices may yet be disappointed.

Riyadh and Moscow will keenly watch shale’s struggle, with an eye on capturing a bigger share of the market and — ultimately — a rebound in prices. The irony of Mr Trump emerging as the crucial go-between for the cartel’s production deal this month would have delighted the Russian executives who encouraged the Kremlin to take American oil down a peg or two.

News in-depthThe Big Read
Texas: how the home of US oil and gas fell in love with solar power 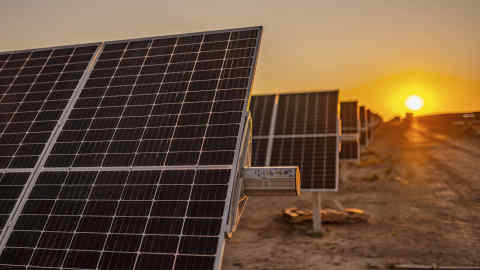 Getting the US entwined in the deal also serves Saudi interests. Anas Alhajji, an adviser to oil producer countries, says Mr Trump’s involvement “finally killed” the so-called “Nopec” legislation in Congress, which would open Opec producers to antitrust suits in the US. “In fact, the President of the United States cheering the agreement of Opec+ was the final nail in the Nopec coffin,” he says.

But while both Saudi Arabia and Russia will see benefits from shale contracting, it is not without risks to them.

US policymakers blame Saudi Arabia, not Mr Trump, for oil’s collapse. The longer the price drop endures, the more likely are measures targeting the kingdom. “I don’t see a big change in American attitudes toward foreign oil supplies, which Americans — from the president down — want to minimise,” says Ms O’Sullivan. Oil-state senators have threatened to withdraw military aid for the kingdom. Moscow, already bristling under US energy sanctions, may find lower prices make it easier for Washington to impose more restrictions.

Neither have they succeeded in completely removing shale from the equation. Government budgets in Riyadh and Moscow are far more reliant on oil revenues than Washington’s.

Wall Street might be less likely to pour cash into shale this time if prices start climbing, but a rally to the $80-level Riyadh needs to balance its budget would be a different matter. Shale can still grow again — at the right price.

“If Russia and Saudi Arabia think they can close shale, they’re wrong,” says Amy Myers Jaffe of the Council on Foreign Relations. “All they can do is change the ownership.”