G20 drops vow to resist all forms of protectionism

Finance ministers from the world’s biggest economies have dropped pledges to renounce protectionism in a meeting marked by tension over trade between the US and others including China.

G20 finance ministers meeting in the German resort town of Baden-Baden noted the importance of trade to the global economy but dropped tougher language from last year that vowed to “resist all forms of protectionism”.

We have reached an impasse

The new communiqué said: “We are working to strengthen the contribution of trade to our economies. We will strive to reduce excessive global imbalances, promote greater inclusiveness and fairness and reduce inequality in our pursuit of economic growth.”

The watered-down commitments on free trade reflected the anti-globalisation mood that Donald Trump has brought to Washington and came in the first G20 meetings between Steven Mnuchin, the new US Treasury secretary, and his foreign counterparts.

While representatives from China were particularly vocal in urging forthright language on protectionism, the US was unwilling to comply, in a turnround from America’s traditional position as a standard-bearer for globalised capitalism.

Japan was said to be one of the few countries that struck a more supportive tone towards the US approach.

Speaking after the meetings Mr Mnuchin played down the differences and said he had not felt bound by language in past communiqués. “We could not be happier with the outcome — we had consensus among the group,” he said.

The US, he said, was now focused on the fact that it had trade deficits and, while it would continue trading, it wanted to reduce those shortfalls over time. “We do have a new administration and a different view on trade,” he said.

Mr Mnuchin also said that there had been real optimism in the room about economic opportunities in a number of different countries, reflecting a different mood from earlier G20 meetings. “Particularly in the US there is a lot of interest in pro-growth policies and you see that reflected in the optimism in the markets.”

Wolfgang Schäuble, Germany’s finance minister, said: “It will take some time for the US finance ministry to come forward. It may be sensitive for some, for others less so. We really tried on all levels.

“We have reached an impasse,” he said. “That’s why at the end we said nothing on [avoiding protectionism], because it meant different things when we said we didn’t want protectionism.” 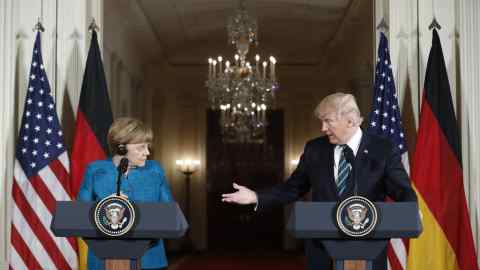 The mood from the US towards the G20 has shifted dramatically since the arrival of Mr Trump, whose America First economic strategy clashes with traditional promises that G20 leaders have willingly signed up to in the past. It heralds a harsher approach in US relations with its counterparts — as seen this week by the tense meeting between Mr Trump and Angela Merkel, the German chancellor, on Friday.

Michel Sapin, France’s finance minister, hit out at the lack of a commitment to reject protectionism.

“I regret . . . that our discussions today have not been able to achieve satisfactorily two priorities absolutely essential in our present world and on which France wants the G20 to continue to act firmly and in a concerted manner.”

Discussing the US shift in position on globalisation, he said: “France is fully convinced of the need for free and regulated trade for all, and for resolving trade disputes within a multilateral framework.”

He also said he was “convinced” that heads of state would reinstate the Paris Agreement to combat climate change at the conclusion of their summit in Hamburg in July.

The haggling over the trade language went late into the meeting, underscoring strong feelings on both sides of the debate.

If we demand a hard answer now, I’m pretty sure we won’t like the answer we get

As late as noon on Saturday, there was speculation that the statement would make no mention of trade at all.

The compromise was proposed by the Canadian delegation and backed by the presidency, held by the German delegation.

Britain and other European delegations had sought strong language committing to a rules-based multilateral trading system.

However, several delegations wanted to avoid forcing the US Treasury into a corner so soon after Mr Mnuchin had taken office.

Philip Hammond, the UK finance minister said it was worth giving the US more time.

“If we demand a hard answer now, I’m pretty sure we won’t like the answer we get,” he said. “The UK’s position is clear: that we would like a strong statement in favour of free trade. But this is an agreed communique so we have to find compromise language.

“When you know that somebody has come to the table with a very clear and strong position, which perhaps they are now looking at how they interpret, perhaps we should give them a little bit of space.”