Start a 4-week trial
Person in the News  Boris Johnson

Boris Johnson, the great pretender finally on the cusp of power

Boris Johnson has one foot in 10 Downing Street. One week into the race to succeed Theresa May as Britain’s prime minister, the most charismatic, shambolic and divisive politician of his generation is sweeping the field, his route to power now clearly defined.

“We have a long way to go,” Mr Johnson said after securing a decisive victory in the first round of voting for the Conservative party leadership, winning the backing of 114 Tory MPs — more than the next three challengers combined. But he is now propelled by a momentum that threatens to crush his rivals.

Even George Osborne, the former chancellor and longtime political foe of Mr Johnson, can see the writing on the wall. Mr Osborne, editor of the London Evening Standard, splashed his front page this week with the headline: “Bojo: I’ve got mojo to unite Britain.”

That is a contentious claim. While Mr Johnson may possess political stardust, he seems an unlikely healer of a fractured country. The former London mayor led the 2016 referendum campaign to take Britain out of the EU and — if he becomes prime minister — will take on the task of delivering the Leave vote that split the nation.

Polls show he is both the most popular and least liked prospective Tory premier. Rivals question his “seriousness” at a momentous time for the country. Donald Tusk, European Council president, says “a special place in hell” awaits Mr Johnson and his fellow Brexiters.

“I think he’s probably going to win,” says Dominic Grieve, the pro-European former Conservative attorney-general. “That will have potentially dire consequences for the party and the country.” Rory Stewart, a rival for the leadership, said this week: “Is this the person you want writing the instructions to the nuclear submarines?”

Supporters of 54-year-old Mr Johnson privately admit that the only person who can halt his bid for power is the candidate himself. The Eton and Oxford-educated journalist is his own worst enemy, as his abortive bid for the Tory leadership in 2016 demonstrated.

Mr Johnson’s campaign team have tried to save him from himself. “Bozzie Bear”, as his new partner Carrie Symonds calls him, has been shackled and muzzled, held back from broadcast interviews and television debates so far because of fears the frontrunner has little to gain and much to lose from such exposure. (On Friday, Mr Johnson agreed to take part in a BBC debate next week, though he will not participate in Channel 4’s hustings on Sunday.)

Mr Johnson split last year from his wife Marina, his new relationship adding yet more tabloid colour to a career which has seen him sacked twice for lying: once as a journalist on The Times for making up a quote, and once as a Tory spokesman after misleading his party leader about an extramarital affair.

The 2019 version of Mr Johnson is very different to the 2016 version. Ms Symonds, a 31-year-old former Tory staffer, has put him on a diet, imposed order on his distinctive blond hair and kept a tight grip on his circle of advisers. “She knows who the sane people are,” says one close colleague. 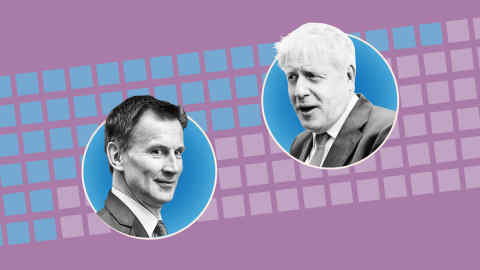 At this week’s campaign launch Ms Symonds sat at the back of the hall as Mr Johnson went through his safety-first script, which focused on his two terms as London mayor (2008-16) while skirting over his unimpressive stint as foreign secretary. He resigned from the cabinet last year in protest at Mrs May’s “crazy” Brexit plan, before eventually backing it in a House of Commons vote.

“As foreign secretary he scored high on energy and profile, but less well on diplomatic skills, detailed concentration on the brief or lasting policy achievements,” says Simon Fraser, a former permanent secretary at the Foreign Office. Alan Duncan, a minister who served under Mr Johnson, says of his former boss: “Clearing up after him was quite a full-time activity.”

It is hard to discern how Mr Johnson intends to break the current Brexit impasse, although he insists that EU leaders will cut him a better deal in the autumn simply to get the issue resolved. If necessary he will take Britain out of the EU without a deal “as a last resort”.

The Mr Johnson vying to be prime minister is also very different from the unkempt Tory candidate who stood for London mayor in 2008, the eccentric who captured a Labour city by showing that a Conservative could be socially liberal and enthusiastic about a modern, cosmopolitan Britain.

As Mr Osborne noted in an editorial this week, the Mr Johnson who called for an immigration amnesty as London mayor then led an EU referendum campaign “that fuelled hostility to foreigners and stoked anger about modernity and social change”. Which Boris would become prime minister?

Mr Johnson’s answer throughout has been: “Which Boris do you want me to be?” In private meetings with Tory MPs, he is both a hard Brexiter comfortable with a no-deal exit and a compassionate Conservative eager to engineer the softest possible departure from the EU.

Like his friend Donald Trump, Mr Johnson is capable of holding contradictory positions simultaneously. Keith Simpson, a veteran Tory MP, says: “The thing about Boris is that he will always let you down.”

But many Conservatives will back Mr Johnson simply because he looks like a winner. For a traumatised party, he appears to be the only candidate capable of changing the political weather. Nobody can be sure which Boris they will get. But they do know they will be in for an interesting ride.

The writer is the FT’s political editor

Get alerts on Boris Johnson when a new story is published