Sam Fleming in Brussels, James Politi in Washington and Jim Pickard and David Sheppard in London

The US is urging European capitals to seek ways of easing the impact of their ban on insuring Russian oil cargoes, arguing the measure could cause global crude prices to soar.

The EU and UK agreed to prohibit insurance on tankers carrying Russian oil at the end of last month, in one of the most far-reaching sanctions yet imposed in response to the war launched by President Vladimir Putin in Ukraine.

The EU has now put its ban into law, subject to a delay before it comes into force, and officials play down the idea that it can be adjusted. The UK, which agreed to mirror Brussels’ insurance prohibition, has yet to lay out its own measures.

The anxiety in Washington reflects fears that the measure could make it impossible for many oil tankers to transport Russian crude, given the dominance of the European insurance industry. The US is working on ways to ensure the ban does not drive crude prices higher, but proposals to allow cover for cargoes priced below an agreed cap or impose tariffs on oil imports do not have broad support in European capitals.

The Biden administration is grappling with inflation of more than 8 per cent as it prepares for midterm elections later this year, underscoring the sensitivity of the issue in Washington.

“They are afraid prices will skyrocket,” said one European official of the US position, adding that Washington had been putting pressure on its G7 partners.

Brent crude, the international benchmark, has risen from about $100 a barrel at the beginning of May to $120 a barrel, with traders pointing to the looming insurance ban as a key reason for the rise.

Wendy Sherman, US deputy secretary of state, said earlier this month that there were “a lot of discussions” about how to implement the insurance prohibition in a way that ensures it does not “inadvertently raise further costs of oil and gas for people”.

She stressed that the work was ongoing, with “very intense discussions between the US and Europe to do this in a really constructive way that hurts Russia but not Europe further, or the rest of the world”.

EU officials say there are G7-level talks on the topic and that it could also be raised at meetings of EU finance ministers this week. The insurance ban is part of the EU’s sixth package of sanctions on Russia, the centrepiece of which was a ban on seaborne oil coupled with a temporary exemption for pipeline shipments into the EU.

The EU pushed through its measures following an agreement with the UK that it would do the same, ensuring that the Lloyd’s of London insurance market is held to equal standards. Industry executives said the co-ordinated ban addressed the problem with the EU’s seaborne oil embargo that Russia could simply redirect its crude elsewhere and still secure cover.

However, Olivier Blanchard, former IMF chief economist, wrote in a note for the Peterson Institute for International Economics last week that the EU-UK insurance ban is a “bad idea” and needs to be reconsidered.

“Oil tankers will simply not be able to carry Russian oil at all,” he wrote of the insurance ban. “The result will be a — potentially large — decrease in Russian oil exports. Yes, Russia will suffer a loss of revenues, but Europe and the US will probably suffer from a substantial increase in world oil prices.”

The US has floated an alternative model under which insurance would still be possible but only if an oil cargo is priced below an agreed cap, as it seeks to drive down Moscow’s oil revenues while curbing potential crude price rises. However, the official said there had been a mixed reception to the idea in European capitals.

One person familiar with the talks said Washington supported Europe’s sixth sanctions package and that there continued to be “close co-ordination with the G7 on implementation to achieve the shared goal of restricting Russian revenue while limiting spillover effects and keeping the oil market well supplied”.

Officials insist that the EU will not walk back on its insurance ban, which was enacted into legislation on June 3.

The UK’s position is less clear given that London has yet to lay out its version of the measures, and Boris Johnson’s government has also been concerned by rising oil prices. An EU official said that when the sixth sanctions package, including the ban on shipping insurance, was adopted, the EU and UK were “fully in line — no divergence on the concept”.

The European official added: “Then it is for each jurisdiction to write down its own measure.”

Lloyd’s, a hub for marine insurance, has lobbied hard for sanctions in the US, UK and EU to be co-ordinated, given the complexity of implementing such strictures and because of the global risks underwritten in the market. 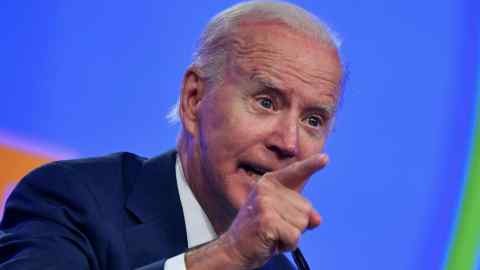 “We’re just interested in making sure of two things — that our market complies and that we get as much joined-up thinking between governments as possible,” said one senior figure at Lloyd’s last week.

Some market sources have also voiced concerns about using insurance as effectively an enforcement mechanism, given the limited information that insurers might have about the nature and destination of a cargo.