We’ll send you a myFT Daily Digest email rounding up the latest Israel news every morning.

The speaker of Israel’s Knesset resigned on Wednesday after the High Court had ruled that he must reopen parliament to vote on his replacement following this month’s election, despite new restrictions to combat the spread of coronavirus.

Yuli Edelstein’s decision to resign rather than refuse to implement the court’s order has averted a constitutional crisis but compounded critics’ fears that his ally, caretaker prime minister Benjamin Netanyahu, is using the coronavirus outbreak to prevent opponent Benny Gantz from forming a new government.

Mr Gantz, who has a slim parliamentary majority of one seat following March elections, was asked last week by president Reuven Rivlin to form a coalition government. But Mr Edelstein, citing measures to thwart the coronavirus, had initially refused to call parliament to sit after the vote. The delay means Mr Gantz’s alliance has not yet been able to replace Mr Netanyahu’s Likud party and its allies in key committees, and take control of the legislative agenda.

After being ordered last week by the High Court to convene parliament, Mr Edelstein declined to schedule a vote for a new speaker. The supreme court then described his decision as “undermining the foundations of the democratic process”.

Mr Edelstein replied that the court has no authority over parliament, saying: “I won’t allow Israel to descend into anarchy, I won’t lend a hand to civil war.”

For Mr Netanyahu’s Likud party, keeping hold of the position of speaker provides it with significant power, even if does not have a parliamentary majority.

Mr Edelstein has barricaded himself in parliament, insisting that his resignation does not take effect for another 48 hours. That would defer the process of replacing him until at least Sunday and further delay handing over the legislative agenda to Mr Gantz’s Blue and White party and its allies.

“The speaker’s actions over the past few days and his refusal to act in accordance with the Supreme Court’s ruling are bringing us dangerously close to anarchy,” said Yohanan Plesner, a former lawmaker and head of the Israel Democracy Institute. “It is illegitimate to raise the prospect of not complying with an explicit court order.” 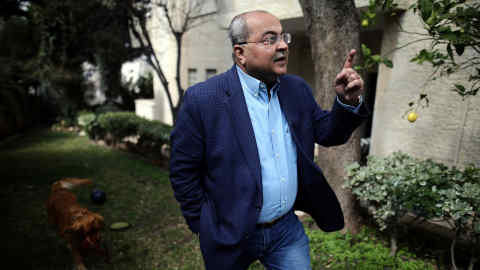 Mr Gantz’s alliance, bolstered by the support of 15 members of the Joint List of Arab parties, has a one-seat majority but he could still struggle to form a government. His deal with Arab politicians has faced opposition from some members of his party. If he fails, the president could ask Mr Netanyahu to try to form a government instead.

In addition to delaying the reopening of parliament, Israel’s coronavirus response has also shuttered most courts, thereby postponing Mr Netanyahu’s own corruption trial until at least May 24.

Meanwhile, Mr Netanyahu has asked Mr Gantz to form a unity government, where the two opponents would agree to a fixed-term coalition to manage the national response to the virus, and then call new elections after the outbreak is over.

But Mr Gantz, who has repeatedly declined to sit in government with Mr Netanyahu while he still faces trial for graft, has rebuffed the call for co-operation. Mr Netanyahu denies the corruption charges.