If you think the same, join us
LG Chem Ltd

LG Chem plans to spin off its lucrative electric vehicle battery business, the world’s largest, to fund an expansion of its facilities through a potential initial public offering as it benefits from a surge in orders.

The South Korean company, which supplies US carmakers Tesla and GM, is boosting its capacity to meet growing orders for EV batteries driven by tighter environmental regulations in Europe and China. While the coronavirus pandemic has dented demand for EVs, LG Chem has Won150tn ($125bn) — or about five years’ worth — of orders on its books.

The battery business — due to be hived off in December — will be wholly-owned by LG Chem, but the Asian country’s biggest petrochemical company said it would consider a stock market listing for the new business.

“We found now is the right time to spin off the business as the battery industry is growing rapidly and generating profits,” the company said on Thursday. “We are also facing the growing need of securing massive investments as we spend more than Won3tn in annual capital expenditure.”

LG Chem forecasts that the battery business will generate more than Won30tn of annual sales by 2024, from about Won13tn estimated for 2020. It overtook China’s CATL to become the industry leader this year, controlling about a quarter of the global market. 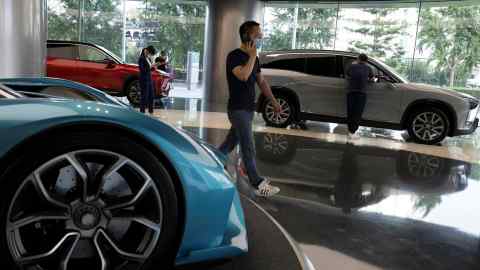 The EV battery unit reported an operating profit of Won155.5bn in the second quarter and expects bigger earnings in the second half on the back of growing demand from European carmakers and through its supply deal with Tesla.

LG Chem’s shares more than tripled between March and late August to hit a 10-year high. However, they dropped 7 per cent on Thursday as investors feared that a possible IPO of the battery business next year would leave LG Chem more reliant on its less lucrative petrochemicals operations.

“LG Chem will seek an IPO of the new business to secure massive funds for its [capital expenditure] spending. Then, LG Chem’s stake in the battery business will be reduced,” said Kim Young-woo, an analyst at SK Securities.

While global EV battery sales fell nearly 17 per cent in the first seven months of the year due to Covid-19, LG Chem’s nearly doubled based on the popularity of vehicles including Tesla’s Model 3, Renault’s Zoe and Audi’s E-tron, according to market tracker SNE Research.

The South Korean company’s global EV battery market share has ballooned from just under 11 per cent last year to more than 25 per cent in the year to July. That put the group ahead of rivals CATL and Panasonic.

LG Chem has plants in South Korea, China, Poland and Michigan in the US, where it is also building a plant in Ohio to supply GM. The company, which has a joint venture with Chinese carmaker Geely, also began to supply batteries to Tesla’s new Shanghai factory this year.