How Huawei lost its PR battle in the west

Foreign advisers say they were ignored and undermined by Chinese management

It has been almost a year since William Plummer lost his job as the head of Huawei’s US public and government relations department.

But it is impossible for him not to get fired up as he sees how the Chinese telecoms company has been dragged into a morass of suspicion by US accusations that it is a security risk and a thief of commercial secrets.

In particular, Mr Plummer has been agonising over Huawei’s handling of the crisis.

Earlier this week, Ren Zhengfei, the company’s founder, hit back at the allegations in two television interviews. He told the BBC that the US would not be able to “crush” Huawei, adding: “If the lights go out in the west, the east will still shine. […] America doesn’t represent the world.”

For Mr Ren, a reclusive former Chinese army engineer who very rarely gives interviews, the public comments were the latest step in Huawei’s counteroffensive against an onslaught that threatens to damage its global business.

The interview came ahead of Mobile World Congress, the telecom industry’s biggest annual trade show where the Chinese company has outshone rivals for years with enormous displays of its technological prowess and armies of marketing staff.

For Mr Plummer, and other non-Chinese who have advised Huawei on its public relations strategy, however, Mr Ren’s assertive tone is the wrong message at the wrong time. “Five years ago would have been the time to do it. I’m not sure that being confrontational now is a good idea,” he said.

President Donald Trump is expected to sign an executive order barring US carriers from buying Huawei gear ahead of MWC, although the move would change little in practice: government pressure on American carriers not to buy from Huawei and moves to derail investments by the Chinese group in US companies has ensured that an 18-year-long quest to break into America has largely gone nowhere.

But Washington is also pressuring allies to shut Huawei out of their markets for security reasons and is going after the company with criminal charges that could land Meng Wanzhou, chief financial officer and Mr Ren’s daughter, in jail. She is under house arrest in Canada, after US authorities filed an extradition request over allegations that the company violated sanctions against Iran. The company and Ms Meng deny the charges.

“This rolling thunder holy jihad they have been on over the past year makes it impossible for any government relations person to do a meaningful job,” said a senior executive at a lobbying firm that worked for Huawei until last year. “Things are made worse by Huawei themselves — the best you get is crisis management but there has never been a consistent, strategic approach to managing their image.”

It was not for lack of advice, according to several PR specialists who have worked with the company.

From the 1990s, Huawei enlisted some of the most illustrious western consultants: IBM to help modernise management; Bain Capital as a partner for US acquisitions; and the Cohen Group, an advisory founded by former secretary of defence William Cohen, to help deal with US government security concerns. It also employed a vast array of global PR companies from Ogilvy to Edelman to BCW.

But at crucial moments, the company did not heed their advice and even outmanoeuvred the consultants it had hired, according to former executives and external consultants. “There was always a fundamental lack of trust in non-Chinese. You offer guidance, and are regularly second-guessed,” Mr Plummer said.

Two external consultants who worked for Huawei in the US and one American government official said a move by management to set up a lobbying outfit in the US in 2009 without consulting its experts on the ground did immense damage.

The company, which was vying for contracts to upgrade US telecom operator Sprint’s mobile network, offered to deliver its products through an independent third party which would probe its software and hardware for security flaws and hold Huawei’s source code, the key software component, in an attempt to offer more transparency.

At the same time, however, Cohen Group was discussing with the Director of National Intelligence to use such mechanisms for trusted delivery of Huawei gear that would assuage US security concerns. When Huawei announced its own structure instead — a company called Amerilink, which would be led by William Owens, a former vice-chairman of the US Chiefs of Staff — that potential deal fell apart over concerns that the new entity was not sufficiently independent.

“There was a chance to build trust, but when Huawei made that sudden move, it was perceived like they had decided to go for window-dressing instead, and they destroyed all trust,” said a person familiar with the Cohen Group’s talks.

Such incidents are not an exception. In a book published last September, Mr Plummer described how senior local staff in foreign markets are regularly excluded from key decisions. At the same time, Chinese executives are constantly second-guessing senior management in local markets out of fear of Mr Ren, injecting confusion into the company’s handling of PR and lobbying abroad.

Mr Plummer also wrote that his warning of how to deal with allegations that the company and Ms Meng had violated US sanctions against Iran were ignored. 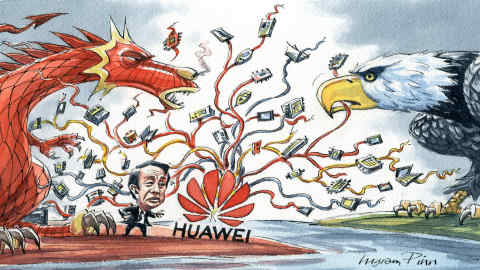 “I received no response or reaction to the concerns I expressed and was effectively iced out of the loop,” he wrote, adding that he “had touched on topics that were off-limits”.

The deep divide between Chinese and foreign staff, corroborated by employees in five countries, was not coincidental. In internal meetings, Mr Ren advises staff to represent the company in different terms in China and abroad.

“The core of public relations is the truth, and we therefore must convey the truth at all times. Correctly define Huawei’s identity and ‘who we are’,” the company founder told executives in 2014, according to Mr Plummer and current and former Huawei executives. “In China, state that Huawei strongly supports the Communist Party of China. Outside China, stress that Huawei always follows key international trends.”

Huawei said it was not aware of Mr Ren having said this.

During the current geopolitical stand-off between the US and China, this chasm between the company’s inner workings and the image it is trying to project in the west has only grown wider. A local executive at Huawei in a European country said China’s increasing power and the growth of Chinese companies had bred arrogance and at times aggression among Chinese, including Huawei staff.

Huawei said the low profile it had kept in the past had lent credence to the perception that it was secretive. “We will continue to let facts speak for themselves but strive to better explain what we are doing to connect people and improve technology,” a spokesperson said.

In a recent meeting with German journalists, Eric Xu, one of Huawei’s rotating chief executives, explained: “Our PR department is asking Huawei executives to speak up about who we really are and what we do. So here we are, even though we are not sure whether this can really work or not.”

But for Mr Plummer, it may now be too late for Huawei to rescue the situation.

“Cut a deal, perhaps buy a pillow factory in Detroit, go to Cfius and sign a national security agreement that would give the US government remarkable visibility inside the company, allow them to name members to an independent board in the US etc,” he said, as suggestions for Huawei’s executives.

“If you get the US boot off Huawei’s neck, all these other markets would be fine. [But] I don’t know if it’s even possible any more.”