We use cookies (opens in new window) for a number of reasons, such as keeping FT Sites reliable and secure, personalising content and ads, providing social media features and to analyse how our Sites are used.
Manage cookies
Accept & continue
UK energy

Nathalie Thomas in Edinburgh and David Sheppard in London

Britain’s energy regulator has launched an investigation into whether National Grid and 12 local electricity network companies breached their licence conditions after power cuts earlier this month that affected more than a million homes and businesses in England and Wales.

It is the first time Ofgem has launched a formal probe into the cause of a power cut in Britain. It will examine whether National Grid holds sufficient reserves of back-up power that can respond rapidly to avoid similar outages in future.

Regulators will also investigate the role played by Danish utility Orsted, whose Hornsea One offshore wind farm in the North Sea “immediately” lost power following a lightning strike on an electrical transmission circuit north of London, followed fractionally later by a gas plant near Cambridge, owned by Germany’s RWE.

Any company found to have been at fault can be fined up to 10 per cent of their UK turnover.

Ofgem announced the probe, which will run in parallel with an inquiry by the government, after reviewing the findings of an initial report by National Grid into the chain of events triggered by a lightning strike late on the afternoon of August 9.

The strike was one of many that hit Britain’s electricity grid that day and power plants would normally “not be expected to trip off or de-load in response”, National Grid said, adding that it would do further work to understand the “exact failure mechanisms” at both the wind farm and gas plant.

The failures “occurred independently of one another” but were each “associated with the lightning strike”, said National Grid, whose ability to manage Britain’s energy system has been called into serious doubt over the power cuts.

“This appears to represent an extremely rare and unexpected event,” it added in the report.

Tom Edwards, an analyst at Cornwall Insight, said it was still unclear why a lightning strike would cause two power generators to fail. “There were lots of lightning strikes on that day without other problems,” he said.

One person familiar with National Grid’s ongoing investigations said the strength of the lightening strike was one area of inquiry.

A total of nearly 1.9 gigawatts (GW) of generation was lost from the system within a few minutes of the lightning strike as some small power generators that are connected to local grids also immediately reduced output, far more than the 1GW of automatic back-up power that National Grid was holding at the time.

The sudden, unexpected loss of power from both the wind farm and gas plant triggered a sharp fall in frequency — a measure of stability of the electricity system — to 48.8 hertz. At this level an automatic system kicks in to prevent a total shutdown. This cut off electricity supplies to 5 per cent of Britain’s electricity demand.

Having read National Grid’s initial findings, Ofgem said “there are still areas where we need to use our statutory powers to investigate these outages”.

The regulator said it would also look at whether so-called distribution network operators, which manage local grids and make the decisions over who is cut off in the event of a frequency drop to 48.8 hertz or below, “made the right decisions both in the numbers of customers disconnected and whether those customers disconnected were the right ones”. 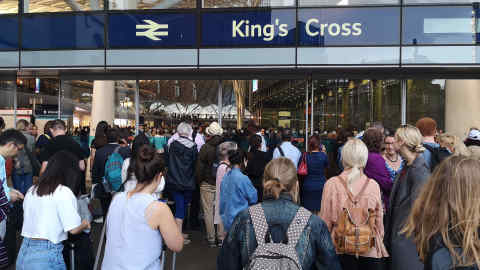 More than 1.1m customers were affected by the power cuts, including a hospital in Ipswich and Newcastle airport. More than 370 trains were cancelled and 873 delayed.

Orsted did not comment on Tuesday but National Grid said in its report that the Hornsea One offshore wind farm saw a “system voltage fluctuation with unusual characteristics coincident with the lightning”. An initial reaction from Hornsea’s systems to these conditions was “as expected” but then protective safety systems activated. The wind farm suddenly reduced its output from 799 megawatts (MW) to 62MW.

RWE said it believed an automatic control system detected an “abnormality” at its Little Barford gas plant near Cambridge and shut down one of the three turbines for safety reasons. According to National Grid, another turbine then tripped and the third was subsequently shut down manually by RWE staff.

Get alerts on UK energy when a new story is published