The long-shot science that attracted Brad Pitt and Neil Woodford

For decades, the prospect of “cold fusion”, which promises abundant nuclear energy without fearsome heat, has intrigued inventors and investors, despite the deep scepticism of mainstream scientists.

A company that has raised more than $100m for its attempt to turn fantasy into reality is now linked to a Hollywood star, to the widow of Apple’s founder and to a crisis engulfing Britain’s best-known fund manager.

Actor Brad Pitt, philanthropist Laurene Powell Jobs’ Emerson Collective and stock picker Neil Woodford are among the high-profile figures who have bought stakes in Industrial Heat, a North Carolina company attempting to develop power sources that run on “low-energy nuclear reactions”, an idea on the fringes of modern physics.

The support of the investors, despite no public evidence that the technology works, has helped propel the valuation of Industrial Heat to almost $1bn, swelling the portfolio of one of its biggest backers, Mr Woodford.

The UK-based portfolio manager, whose fondness for exotic private companies has caused a liquidity crunch at his flagship fund, owns about a quarter of Industrial Heat and his funds have invested £54m.

It is the biggest holding of Woodford Patient Capital Trust, one part of Mr Woodford’s troubled empire. It is also held by the Woodford Equity Income fund, which was frozen to investor withdrawals earlier this month, sparking recriminations in the UK and probes by regulators and lawmakers. A spokesman for Mr Woodford declined to comment.

While his public investments move in line with the stock market, the valuation of Mr Woodford’s private stakes is more opaque. In September 2018, Woodford Patient Capital Trust marked up the value of its stake by 357 per cent to $113m, suggesting an overall valuation of Industrial Heat of $918m.

“Over the course of the past 18 months, there have been developments within Industrial Heat’s portfolio of technologies that have shown increasing promise,” said WPCT at the time.

The premium valuation compares with a relatively slim asset base, according to filings. The latest financial information for IH Holdings International shows that at the end of 2017 it had net assets of $38m, including investments in subsidiaries valued at $32m after a $15m writedown.

The revaluation appears to have been triggered by a new funding round, which drew more money from Mr Woodford and the backing of Emerson Collective, the organisation founded and run by Ms Powell Jobs. Emerson Collective purchased a $10m stake in the UK-registered holding company of Industrial Heat last year, according to UK filings.

Gregory Powell, her brother, is a director of the holding company, IH Holdings International Limited, according to the filings, which give his address as the same one used by Emerson Collective. A spokeswoman for Emerson Collective did not respond to multiple emails seeking comment.

Other backers include John Sall, the billionaire co-founder of the North Carolina-based analytics firm SAS Institute, who purchased a $5m stake in the holding company last year. He declined an interview request through a SAS Institute spokeswoman. 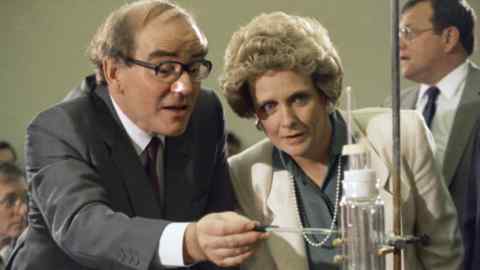 Their investments are evidence of the continuing allure of cold fusion, which promises near-limitless energy without the high temperatures typically needed for nuclear reactions. But the idea was discredited soon after it first emerged in the late 1980s.

Thomas Darden, Industrial Heat’s chief executive, is open about the scepticism surrounding cold fusion and said that for a long time he viewed it as a “pathological science” — one where believers see what they want to see.

He said he decided to take a serious look in 2012 when he was approached by cold fusion researchers. Mr Darden, a North Carolina businessman with a background in brickmaking and the lucrative clean-up of contaminated former industrial sites, launched Industrial Heat that year.

“Scientific theories evolve over time, so the absence of a theory does not mean that a question is settled,” he said in an emailed response to the Financial Times. “We feel it is worth exploring all possibilities around cold fusion, to make a diligent effort to determine if it is in fact impossible.”

Mr Darden’s son, also called Thomas Darden, was the chief executive of Make It Right Foundation, a charity launched by Mr Pitt in 2007. The foundation was embroiled in lawsuits last year over homes it built in New Orleans.

The Briarcliff Trust, which owns Mr Pitt’s Hollywood Hills estate, according to local property records, and has been linked to his charitable donations, has held a stake in Industrial Heat’s UK holding company since its creation in 2015, the UK filings show.

It is not clear when Briarcliff’s association with Industrial Heat began, or how much it has invested, but it appears to date back before 2015 when investors in a US entity had their holdings transferred to the company’s UK vehicle, according to a 2017 deposition of an Industrial Heat executive.

“Whatever you owned in Industrial Heat LLC when it was the parent, you owned the same amount pro rata in IH Holdings International Limited when that was formed,” said the executive, John Vaughn.

A person familiar with the Briarcliff stake said Mr Pitt’s only investment had been made “many years ago” and that “any residual interest is limited and completely passive”. A spokesman for the actor declined to comment.

Industrial Heat’s first swing at unlocking the miracle of near-limitless nuclear power was a tie-up with a controversial Italian entrepreneur, Andrea Rossi, who in 2011 claimed he had invented a cold-fusion nuclear reactor called the “Energy Catalyzer” or “E-Cat”.

His claim that the device can actually produce excess energy has never been independently verified. Every peer-reviewed and proven demonstration of nuclear fusion, which is yet to be commercialised, has required extreme amounts of heat and pressure.

In October 2012, despite the widespread scepticism at Mr Rossi’s claims, Industrial Heat agreed a deal to license and commercialise Mr Rossi’s invention.

“We’ve invested more than $10m so far in Rossi’s and other [low-energy nuclear reaction] technology and we’ll spend substantially more than that before we know for certain because we want to crush all the tests,” Mr Darden told Fortune magazine in 2015.

The relationship descended into a bitter lawsuit in 2016 after Industrial Heat paid Mr Rossi $11.5m but refused to pay a larger $89m success fee agreed in the licensing deal. The company argued that the E-Cat device had not been proven to work. The two sides settled in 2017. Mr Rossi did not immediately return a request for comment.

In March 2016, an executive at Industrial Heat told Mr Woodford and one of his fund managers, Paul Lamacraft, that they were not in a position to report a successful test of Mr Rossi’s technology.

“This is clearly very disappointing given that Rossi’s technology was a core element of the initial investment,” said Mr Lamacraft in response, according to an email revealed in the lawsuit.

Mr Darden was sanguine about his experience with Mr Rossi: “We do not consider it to be a failure to disprove an approach to cold fusion.”

He said his backers shared “a tremendous passion for solving the biggest environmental challenge of our time — pollution associated with energy production”, calling Mr Woodford’s firm “a great partner” and one of Industrial Heat’s “longest-standing outside investors”.

He added: “Fortunately, consistent with our plan from the beginning, we funded many other researchers besides Rossi, and we continue with our efforts.”

Cold fusion continues to be a chimera / From Professor Ian Fells, Newcastle upon Tyne, UK