In the cities of the future we will live in 80-storey wooden skyscrapers and walk over plant-covered buildings disguised as hills. At least that is what the shortlist of this year’s World Architecture Festival suggests. One of the most extraordinary projects submitted in the category “Future Projects — Residential” is by the Danish-US firm Bjarke Ingels Group (BIG). The Hualien Wellness Residences in Taiwan is a range of grassy peaks, climbing 57 metres high.

“It was one of the projects that jumped out straight away,” says Simon Davis, associate partner at Rogers Stirk Harbour + Partners, one of the judges who selected the shortlist. “We were looking for buildings with flair, spirit and charisma, while addressing the challenge of how to create housing for large numbers of people, while maintaining a contextual, place-making approach,” he says.

The context and place of BIG’s project is key. “Hualien is a small town in a beautiful landscape between mountains and rice fields on the [east] coast of Taiwan,” writes Bjarke Ingels in a book about BIG’s work worldwide, Hot to Cold: an odyssey of architectural adaptation, published last year. “The local industry of quarries and stone carvers is giving way to a recent surge in tourism. The dilemma was the archetypical dilemma of tourism: how to preserve and enhance the natural beauty and dramatic landscape while increasing the population to inner-city density?” And so BIG came up with what it describes in its WAF submission as “a mountain terrain of flora-covered stripes.”

The stripes run east to west to frame the best views while providing shade. “Low-angle, high-glare morning and evening sun is blocked by the stripes while favourable north-south light is allowed into the units,” he writes. Green roofs, that morph into walls, minimise heat gain.

According to Ingels, “the resultant architecture appears like a stylised natural landscape of peaks and valleys, hillsides and canyons. Pools appear like mountain lakes, running tracks like hiking paths and balconies and terraces like plateaux or ledges.” Alas, the project has stalled. A single show home — a small striped hill — was built in 2009 but there has been nothing much since. “The client is now securing [finance] for the next phase,” says a spokesperson for BIG. Perhaps we are looking at a geological timescale for this landscape to develop. 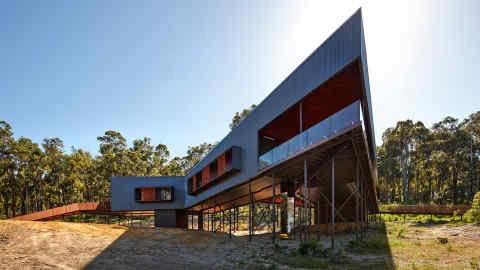 Like Hualien’s plant-covered “hills”, other shortlisted projects feature abundant vegetation. Lush gardens of shrubs and trees grow on towers from Mexico City to India. Yet there is only one project in this category — which includes concepts — that would be made from trees.

River Beech Tower is a design for an 80-storey all-timber apartment block, almost 200 metres taller than the world’s current tallest timber building (an 18-storey tower under construction in Vancouver). A concept planned for a lakeside site in Chicago, the research project is an academic collaboration between Perkins+Will and Michael Ramage of the Centre for Natural Material Innovation at the University of Cambridge.

The tower will use engineered timber products such as cross-laminated timber, also known as “jumbo plywood”, in all primary structural elements, says Todd Snapp, design principal at Perkins+Will. “Many timber buildings rely on concrete and steel,” he says, “which is fine, but we wanted to explore the purity of designing the project using primarily timber.”

Timber, a renewable resource, is more sustainable than concrete or steel. The building, designed to withstand winds coming off Lake Michigan, Chicago, comprises two slender towers structurally bound together every 20 storeys with large floorplates, creating four tall atriums within. The façades have a honeycomb-like structure, one of nature’s most efficient ways to build strength.

Engineering company Thornton Tomasetti is constructing and testing structural elements of the tower. “Timber buildings are getting taller incrementally, so there’s no reason why in, say 10 years time, we aren’t building ones like this that are 80 storeys tall,” says Snapp.

Another experimental timber project (in a different category called “experimental”) is Tree House, a development of low-cost, quick-to-build apartments by Rogers Stirk Harbour + Partners. Prefabricated timber-framed apartments of 75 sq metres would be assembled within a timber exoskeleton, up to 20 storeys tall. “Timber has a low carbon footprint with excellent structural and [insulation] properties,” says Ivan Harbour. “It’s a totally natural product.”

Until such experiments with timber become reality, developers and architects will continue to come up with more concrete designs for towers, such as the 81-storey Vincom Landmark 81 (LM81) in Ho Chi Minh City, due for completion next year. This 460-metre-tall skyscraper of concrete, steel and glass, is described by Atkins as “a bundle of square tubes that progressively diminish in number to offer the tower’s bold spire-like form.” It is similar to the world’s tallest tower, the 830-metre-tall Burj Khalifa in Dubai.

House & Home
World Architecture Festival focuses on ‘housing for everyone’ 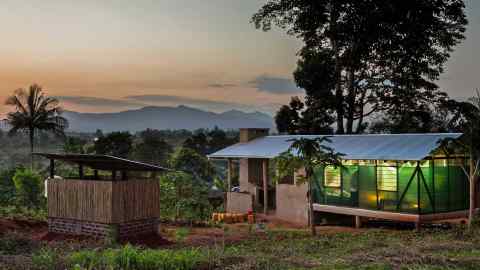 LM81 will be mostly residential with a shopping mall at its base and a hotel at its summit. The tops of the “square tubes” will have rooftop gardens and swimming pools. It will be the tallest built structure in Southeast Asia, taller than the Petronas Towers in Malaysia.

Ian Milne, senior design director at Atkins, defends these ever-growing towers. “When seen from the western perspective the mega-towers of Asia might sometimes look unsustainable and perhaps even like vanity projects. But I personally believe that they actually offer one of the most sustainable answers to today’s pressure for urbanisation across Asia,” he says. “When closely coupled with excellent public transport, clusters of tall towers are a highly sustainable solution to housing the growing urban populations of the region. They permit large numbers of people to be accommodated on a limited physical footprint. Car ownership is also dramatically reduced with an obvious reduction in carbon emissions.”

There is also a cultural context to bear in mind, adds Milne. “Is the ‘Englishman’s castle’ ever likely to be found in a skyscraper? Possibly not, but here in Asia an apartment at the top of an extremely tall tower is many people’s idea of a dream home.”

It is expected up to 1,600 people will live in LM81. Transport needs will be met by a new metro station and nearby river taxis. Shops and leisure facilities will be within walking distance.

As well as growing upwards, increased densification can proceed by building on spare “infill” sites. One concept project is a modest 25-apartment block in Stockholm by Swedish firm Utopia Architects. Bolinders Plan squeezes between buildings, looking as if a long-legged walking space vehicle has just landed. Construction on a turning point on a road will prioritise pedestrians and cyclists over cars, says Jesper Lovkvist of Utopia, which has another project on the same shortlist. Hornsbruksgatan, also in Stockholm, combines 29 new homes with a new metro building, all covered by a rooftop public park.

The greener cities of the future will not only have buildings made of sustainable materials, but fewer cars and better public transport. There remains a way to go before we’re striding over those green hills.