How to get over your fear and learn to speak up

Public speaking is a core skill in the 21st century workplace

Susan Cain, a best-selling writer, describes her “year of speaking dangerously”, making toasts to small groups and giving interviews on radio and television, as a steady marathon. The finishing line? Delivering a TED Talk to an audience of 1,500 people without notes.

As the speech approached, the author of Quiet: The Power of Introverts in a World That Can’t Stop Talking, was beset by sleeplessness. “I’d rather die than get up and give this talk,” she writes in an essay.

Ms Cain lived to deliver her talk. At the end she received a standing ovation (though she has no memory of it because she was “too numb”) and a video of the speech went viral.

Anxiety about public speaking is common, even for seasoned professionals. Jerry Seinfeld, the US comedian, observed in a stand-up routine: “People’s number one fear is public speaking. Number two is death . . . This means to the average person, if you go to a funeral, you’re better off in the casket than doing the eulogy.”

Emma Watson, who grew up in the public eye playing Hermione in the Harry Potter films, admitted to being anxious before addressing the United Nations. When she launched the HeForShe feminist campaign, her voice and hands trembled. “I was very nervous,” she said in an interview. “It wasn’t an easy thing for me to do.”

Viv Groskop, an author who coaches businesspeople on public speaking, tackles anxiety and vulnerability in her book, How to Own the Room: Women and the Art of Brilliant Speaking. Traditional advice, she writes, does not help people get to the point where they think they can “actually give a speech in reality and not just in [their] imagination”. To do so, they need to find opportunities (there are lots when you start looking). And accept that “nerves and anxiety are a part of life”. 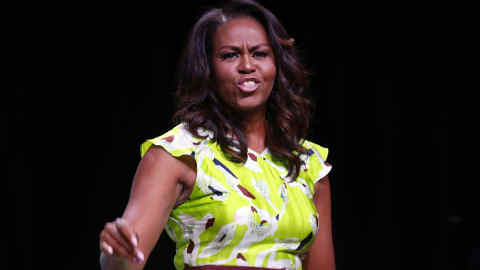 In person, Ms Groskop is ebullient — as befits someone who is also a stand-up comedian. We meet because I want some tips to perhaps cure me of wriggling out of anything involving a stage or a lectern. Or even, to be frank, saying a few words about a departing colleague.

I hate the stomach-churning anxiety and the dread of drying up. Yet I also hate the career-limitations of not doing so. And I know that doing it is the only way to get over it.

After all, at 21 I was so shy I would have to dare myself to speak up in a meeting — just one thing, anything. And bit by bit it got easier until I forgot about it entirely. The same happened with radio and podcasts.

Ms Groskop says that feeling sick and anxious is not a good reason to say “no” to public-speaking events.

“Feeling anxious is just a sign that you’re a human being,” she says. While she does not believe in convincing everybody to become a public speaker, she does believe that everyone has to prepare to do a bit of public speaking at work.

As Chris Anderson, curator of TED Talks, puts it: “Presentation literacy isn’t an optional extra for the few. It’s a core skill for the 21st century.”

Most people are in jobs that require they speak up. In offices, executives must present to their team, get their points across in meetings or interview in front of a panel. Let’s not get started on YouTube and Instagram stories.

Jobs have changed. Once, writing novels, for example, used to be a good job for the chronically shy. No more. Today novelists are required to step out of their attics and pound the literary circuit to publicise their books.

Am I nervous because I am a woman? Perhaps. Women are prone to being self-critical, argues Ms Groskop, who points out they are also frequently interrupted and scrutinised. “Women are afraid of being shown up.”

The reason she wrote the book for women is that they have been underserved when it comes to advice on this area. “Almost all the books ever written about public speaking and rhetoric have been about men, by men and for men”, Ms Groskop writes.

For any public speaker, male or female, Ms Groskop says, the key is to develop “enough trust in yourself that if you get something wrong you will style it out. Some people will say ‘she got it wrong, what an idiot’, others won’t.”

In one-to-one coaching, typically Ms Groskop discusses psychological barriers, previous experiences and works on voice, projection, pace and posture. Ahead of the speech, she makes sure her clients rehearse a lot.

A good tip is to study speakers you admire — but also to understand the work involved to get to that level. As Ms Groskop puts it, people need to give themselves permission to improve. It is never just one speech. There will always be other opportunities.

The key is to find your own presentation style rather than believe you have to conform to a type, says Ms Groskop. Some of the anxiety people feel, she says, comes from feeling unconvinced by the message they are meant to convey. In a workplace context, this might be a sign that their job is not a good fit.

Having something you really want to say is key. As Ms Watson said of her UN speech: “I just kept rereading the speech the day before and asking myself: ‘Do I believe this line?’ and the answer was always ‘Yes’.”

People also have unrealistic expectations about public speaking. “You are not going to be Martin Luther King . . . if you are being asked to deliver the Q4 marketing report”, says Ms Groskop. “You just have to do a decent job and not be sick.”

Ms Groskop sees many women make the mistake of over-preparing the mechanics of their speech — what they are going to say, which slides to use. Her advice? “You should fix them early in the preparation and keep them as minimal as possible.”

Just as Coco Chanel advised women to take off one piece of jewellery before leaving the house, so too with speaking — strip it back.

If, like me, you are resolving to speak up in 2019, Ms Groskop advises finding an incentive, such as proving to yourself that you are better than you think you are. “If it nags away at you, makes you feel small that you say no to things”, she says, set yourself the challenge of six months of saying yes to things. Take copious notes about how you feel.

Finally, remember the big picture. “No one will remember it”, Ms Groskop says. “The sad thing is these things are inconsequential.”

Write down the excuses you are making to yourself about not speaking. What are your self-limiting beliefs? Read these back and later write an opposite truth. For example, by “I don’t have a strong voice”, write, “I can work on strengthening my voice.”

Pick a topic you care enough about to write a speech on. Write five phrases that suit the topic, persuading the audience why they should care. Then give this speech — perhaps by recording it and publishing it online, or at a party.

Work on self-belief. Give yourself two minutes to write down 10 things you have done that make you proud. Set the timer to 20 minutes and write another 40. Read the list back.

Watch and analyse speakers’ styles. Find ones you like on YouTube and TED Talks and try to see what works about it.

Look for opportunities to speak. Practise different types of speaking. Don’t be put off by a bad experience.